A Nurse in Uniform: What War? 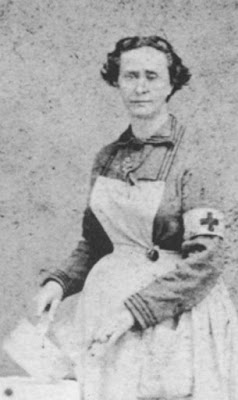 Photos of Civil War nurses are rare. Nurse Mazzara's picture was published in the California Historical Society Quarterly with a caption dating it to about 1862. She seems to be wearing a uniform. The bodice has triple rows of soutache or braid on the collar, cuffs and running down the the front. She has an arm band like one we'd see today on a Red Cross nurse. Her white, almost floor-length apron is pinned onto the bodice and perhaps buttoned at the waist. She may be wearing a cap that doesn't show in the photo.

See the article with the photo here:
http://www.militarymuseum.org/CAandtheCW.pdf

But, I'm becoming suspicious that it's not an 1862 photograph and she is not wearing a Civil War nurse outfit.

The caption says it is a Bradley & Rulofson photo. These San Francisco photographers did not travel to any battle fronts so the photo was probably taken in their studio after their partnership began in 1861. Amelia's husband, sculptor Pietro Mezzara worked on the premises of the Bradley & Rulofson Studio in the 1860s and '70s.

Amelia Mezzara was indeed a Civil War nurse but one wonders why a Civil War nurse was photographed in San Francisco, so far from any battlefields. Amelia Victorien Foulon du Groudre Mezzara was born in France. Husband Pietro, inspired by the Gold Rush, came to California in 1850. He found some success as a sculptor, particularly in cutting life-like cameos. 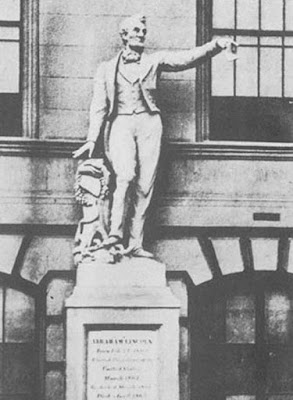 At the end of the century a San Francisco newspaper article explained Amelia's service as a nurse with the Union Army. She was in New York in 1861 hoping to join her husband in California but had to wait three months for a sailing date. Believing (like many optimists) that the Civil War would last three months she volunteered to join Dorothy Dix's corps of nurses and went South with Hooker's Division. "Mme. Mezzara remained faithfully at her post until Richmond came down."

Amelia finally made it to California after the war. When the Franco-Prussian War broke out in 1870 she bravely traveled to France to use her nursing skills in her native country. 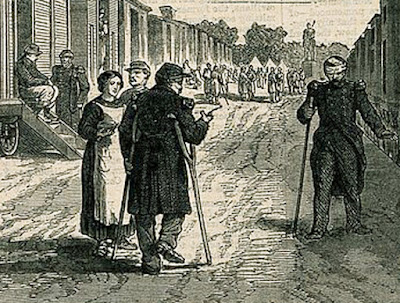 Railroad cars as hospitals in the Franco-Prussian War

She received a medal in France and another from French women back in San Francisco. 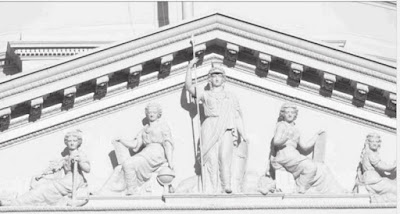 Mezzara sculpture on the state capitol in Sacramento

Pietro Mezzara returned to Europe about the same time Amelia sailed and never came back to the U.S. After the war was over in 1871 Amelia supported herself by teaching French in San Francisco. Newspaper portrait from the 1890s.

In 1896 she was awarded a Union Nurse's Pension after becoming disabled in a fall from a streetcar. At the time an article in the San Francisco Call included an interview:


" 'I do not care to see myself written up as anything of a heroine,' said the gentlewoman yesterday. 'The world has many women who did as much and more than I have accomplished among the wounded soldiers, and their names have never been mentioned in the newspapers. The work of nursing was hard always, as nurses in the hospitals fared like the troops, but I have ever received the utmost kindness and courtesy from foes as well as friends. The graceful commendation of the two great republics and those who honored me with their approving testimonials, is recompense far above my deserts.' " 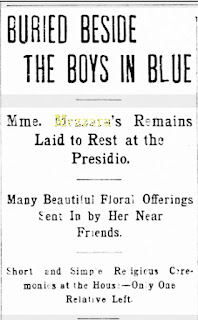 She died the following year of "paralysis of the brain," probably a stroke.

After reading Amelia's story and trying to figure out when the photo was taken, I believe that uniform with a red cross arm band is her French uniform from the Franco-Prussian war. 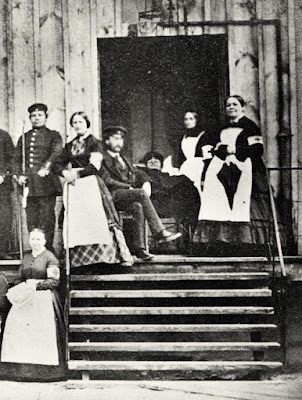 Detail of a field hospital during the French-German War of
1870-1871. See the rest of the photo in the collection of the
Oregon Health & Science University Library here:
http://ohsu-hca.blogspot.com/2011/03/franco-prussian-war-photograph.html

The red cross as an identifier was developed in 1863 when international signers to the Geneva Convention agreed that medical personnel should easily be distinguished by a simple badge. The red cross on the white background was a reverse of the Swiss flag, a nation that prided itself on its neutrality. 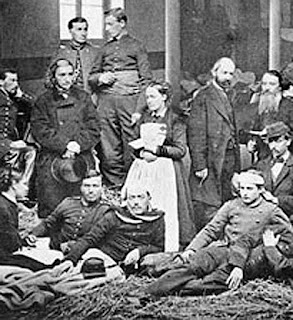 Is that a red cross on the nurse's apron in
this Swiss hospital?
https://www.icrc.org/eng/resources/documents/misc/57jnvw.htm

During our Civil War field hospitals were identified with a yellow and green H.
See a post on the flags with the H here:
http://civilwarquilts.blogspot.com/2011/10/42-h-is-for-hospital.html

There's really no evidence I've seen that Amelia's photo was taken in 1863. 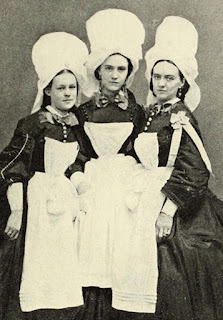 P.S. Many captions will tell you this photo is of Civil War nurses in outlandish caps. Not true. They are women dressed in regional French headgear at New York's Sanitary Fair. 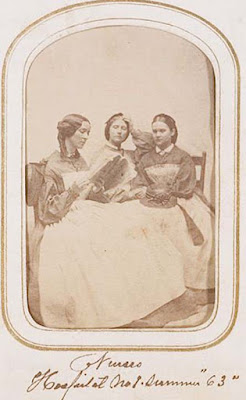 I found this photo floating around the internet.
"Nurses
Hospital No 9. Summer '63' " 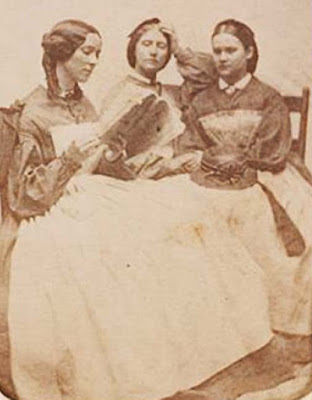 I don't think there were any uniforms as such for nurses during the Civil War other than a discreet dark dress and a pinned apron.

The American branch of the Red Cross was formed by Clara Barton (and others) after the Civil War. I don't believe the photo was taken while Mme. Mezzara was wearing Civil War nurse's garb or serving as a Civil War nurse. Dorothy Dix had standards for her nurses' dress, attempting to assure that they wore plain and not sexually alluring clothing, but there were no uniforms for Civil War nurses, even those actually enlisted in the Army.

I have not seen photos containing Red Cross emblems on any Civil War personnel, vehicles or hospital quarters.

BTW that statue of Lincoln Mazzara's husband made. I appreciate the desire to honor him, but his pose is so un-Lincolnesque! It's actually a bit shocking.

It is good thing it melted. I don't think the guy had much talent.

Just did some reading on Cornelia Hancock, a New Jersey born Quaker nurse who tended wounded during the Civil War - a remarkable lady who accomplished so much in her 87 years. She also wore plain clothing (agree with the comment about Dorothea Dix (aka “Dragon Dix”) who did not want pretty ladies in fancy dress as nurses). There is a photo of Cornelia taken at Brandy Station, Virginia in 1864 - dark dress, no nurses style cap or adornment and no red cross arm band.

Here's a link to a photo of Cornelia Hancock in a field hospital:

Cornelia Hancock was a nurse to my great grandfather, Gideon Durfee, at Gettysburg. It sent chills up my back when he was mentioned in the book of her letters. When she arrived at Gettysburg, the men hadn't eaten and were laying under trees, no hospital. The women from town had baked bread and supplied jam or jelly and she spread it on the broken pieces of bread with a stick, she had no knife. As she stayed with the Army, she was eventually given a tent and a cook stove that the Army would move from battle to battle. Great book if you like Civil War history or women's history.

Before I read any of your great research... I thought "French" too..

As always, great job on all of your research!
That Lincoln statue looks a bit effeminite, not your typical farm boy at all. (but perhaps more of a french flair?) lol

I think Pietro had an old statue of Lafayette or some early 19th c guy sitting around and put
Lincoln's head on it. The statue's main claim to fame was it was the first sculpture of Lincoln---first not always best. I think it's interesting that he and Mme. never had any children but then again
when did they see each other?

I love your forensic history!

I am a nurse myself and a civil war fanatic! One civil war nurse I had not ran across in my readings. Thank you for the post!

Even though I’m not a “connoisseurs” of your civil war’s history, it’s interesting to read about it.
Mezzara is a very common last name in Sicily, especially in Palermo and subborbs.
Great post. Thank you!

That Lincoln statue looks a bit effeminite, not your typical farm boy at all. (but perhaps more of a french flair?) lol

Hello.
Thank you very much for this photo of Amélie/Amélia Mezzara and no Mazzara. She is the husband of the sculptor and photograph, Pierre/Pietro Mezzara and her cousin! All about Mezzara family is in my book: Bruno Montamat, Paul Mezzara, un oublié de l'Art nouveau, Mare & Martin, 2018.