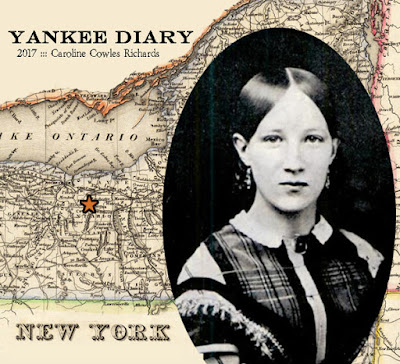 Next Wednesday we begin the 2017 Block of the Month:
Yankee Diary. Here's some information about the diarist. 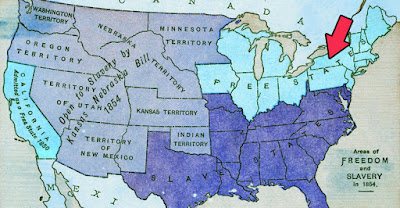 The United States before the Civil War

Carrie lived in upstate New York, under the red arrow by the Canadian border. The light blue states are the Free States, the dark blue the Slave States, and the gray areas were the "West". 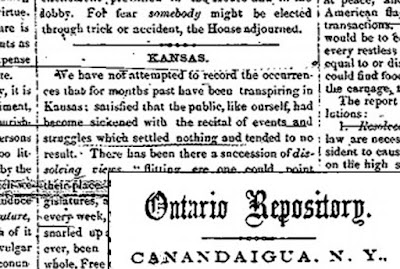 Kansas was a frequent topic in the Ontario [County]
Repository newspaper in the late 1850s.


Where I come from in Kansas we think the Civil War began in 1854, the year Congress established the Kansas/Nebraska Territories and gambled their future as slave states or free states on the votes of the first citizens.

By 1854 the U.S. had become two cultures, a North focusing on industry and a South on agriculture based on slave labor. Extending either culture into the Western territories brought a crisis to a head. Within seven years the two cultures were at war. 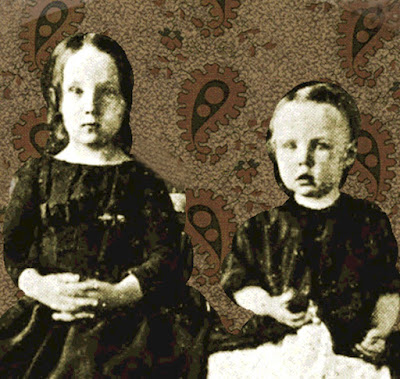 Carrie and Anna soon after their mother died.

Caroline Cowles Richards grew from a girl to a woman in those seven years. 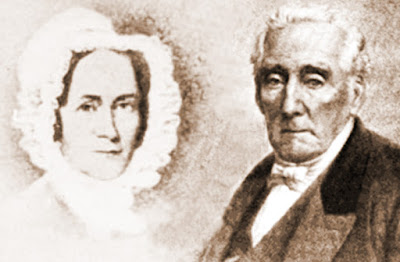 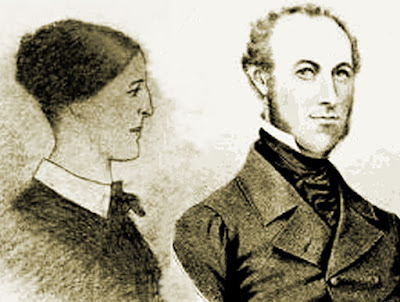 The girls' mother had died when Carrie was almost five and Anna was an infant. Both parents suffered from chronic diseases. Elizabeth had tuberculosis and James was an alcoholic with bi-polar disorder. A peripatetic Presbyterian minister, he left them to be raised by their grandparents who were in their early seventies.

Carrie and Anna were fortunate in their mother's parents who raised them with the steady hand of old time Congregationalists confident in the ways of their religion.  Brothers James and John were not so lucky and spent their childhoods in a home with a bedridden mother and their adolescence following their father as he alienated congregation after congregation with his drinking and manic episodes. 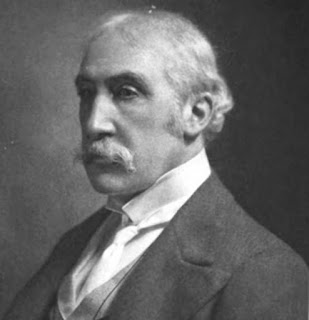 Older brother John Morgan Richards (1841-1918) wrote an autobiography
in which he recalled his father's death from a fall in Scotland in 1875.
Daughter Pearl Richards Craigie (1867 – 1906) was a well-known
English novelist who wrote under
the name John Oliver Hobbes

Family disgrace was not mentioned in Carrie's diary, at least in the version published a century ago. But her extended family was remarkable and written records about them abound. (See the books & documents below.) 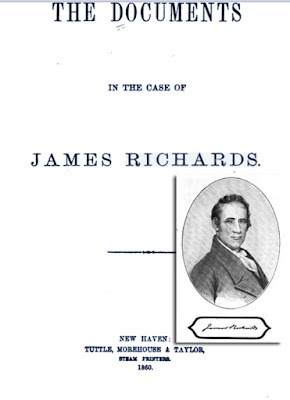 Her father Reverend James Richards II was publicly censured. The problem was not only his alcoholism but also his refusal to accept responsibility. His manic periods were as outrageous as his alcoholic binges.

James II was the son of a well-known minister and chose to follow in his father's footsteps after he met Elizabeth Beals who had vowed to marry a minister and only a minister. An old school friend of Elizabeth's told Carrie:

"She hoped we would be as good as our mother was. That is what nearly every one says." 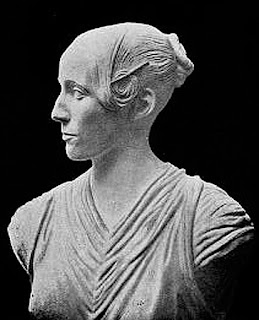 A bust of Elizabeth Beals Richards who died at 32.

After being compared to her mother once too often Carrie wrote,


"I think children in old times were not as bad as they are now."

How much did Carrie know about her father's problems?  He visited. When Carrie was about 10 he took the girls "to the store and told us we could have anything we wanted---stick candy, lemon drops, bulls' eyes, rubber balls, jumping ropes with handles, hoops and jewelry.

They corresponded often. When she was 13 he sent a box of fruit from his post in New Orleans. She wrote "a little 'poetry' " back. He sent her money and Gulliver's Travels with a gold image of Gulliver on the cover. "Grandmother did not like the picture so she pasted a piece of pink calico over it so we could only see the giant from his waist up." 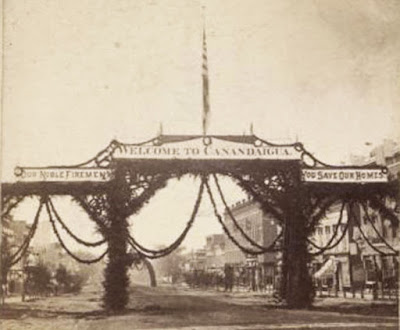 The diary begins in 1852 when she was 10 and settled in Canandaigua, a prosperous city only a few decades older than she. Her grandparents were well-to-do community founders. Aunts, cousins and other relatives lived there comfortably to give Carrie and Anna an extended family. 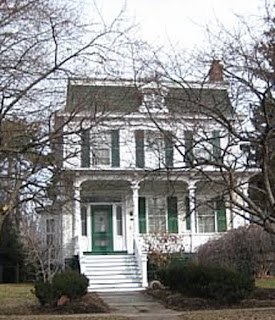 Carrie's diary. published to give us a nostalgic view of small town American life, reveals glimpses of contemporary issues before and during the Civil War. With careful reading we can see slavery's resonance in a Yankee state, family tragedies and the importance of New York as a center for women's rights and abolition.

Like her niece Pearl Craigie, Carrie had a talent for writing and a sly wit. Her diary is full of fun as well as sorrows. Following her will be an enjoyable mid-19th-century journey.

Links to publications about Carrie & her friends and family:

Diary of Caroline Cowles Richards, 1852-1872
The diary is still in print and has been published many times under different names. You can buy it as a printed, bound book and in chldren's editions. The first publication was 1908, I believe.

A 1913 edition at Google Books:
Village Life in America, 1852-1872: Including the Period of the American Civil War. as Told in the Diary of a School Girl.
https://books.google.com/books?id=Dwb4te5GNWkC&printsec=frontcover&dq=village+life+in+america+by+caroline+cowles+richards&hl=en&sa=X&ved=0ahUKEwjzt5Oq6tzMAhWBLyYKHYqQDkkQ6AEIHDAA#v=onepage&q=village%20life%20in%20america%20by%20caroline%20cowles%20richards&f=false

About Carrie's Immediate Family:
Her Father
The Documents in the Case of James Richards.
https://archive.org/details/documentsincase00coungoog

Her Brother John's Memoir:
With John Bull and Jonathan. Reminiscences of Sixty Years of an American's Life in England and in the United States by John Morgan Richards. 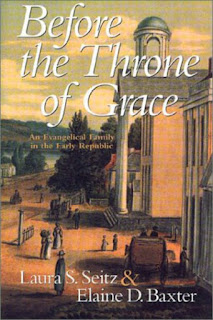 Her paternal grandfather's family:
Before the Throne of Grace: An Evangelical Family in the Early Republic by Laura S. Seitz and Elaine D. Baxter. This is available only as a bound book. It contains letters from her parents.
http://www.syracuseuniversitypress.syr.edu/fall-2006/before-throne.html 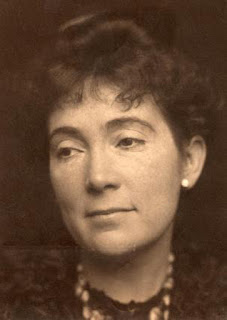 Niece Pearl Richards Craigie's biography by her father, Carrie's brother:
The life of John Oliver Hobbes: told in her correspondence with numerous friends

To say nothing of the Fields Family, her grandmother's distinguished brothers....

The Ontario County Historical Society has some of the quilts and many photos related to Carrie, plus her piano.
http://www.ochs.org/objects/
Posted by Barbara Brackman at 6:00 AM

I've read the diary and it is the most charming picture of two young sisters and their grandparents imaginable. I had no idea of Carrie's father's problems. I look forward to reading the other materials you recommend, it is a special family (and one with special troubles as well apparently).

An interesting theme in this all is education in that time and place. The family was well educated without benefit of public schools and fostering education was the primary interest of Carrie's financially successful grandfather. Carrie went on to marry a teacher as well.

I just finished reading the Village Life version, and enjoyed Carrie's wit. I especially appreciate the photos and additional info you provided today -- gives me a broader view of her life. I will explore some of the other resources also. Looking forward to the series!

I look forward to read more and learn more about Carrie.