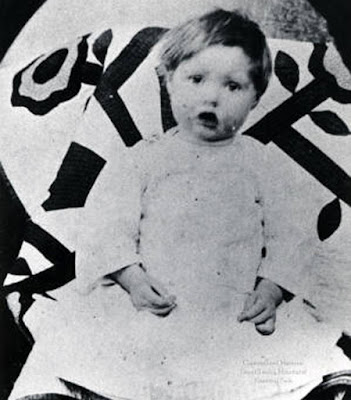 In the winter of 1861 as Southern states began seceding two young women in the North Carolina mountains were making quilts. Cornelia Smith Henry was a well-to-do slave owner of 24 years whose husband's family owned a resort hotel in Sulphur Springs in Buncombe County. One of her 20 or so slaves was Atheline, who had just turned sixteen. Atheline took care of Cornelia's two young children and did much the cooking for the house as well as some of the sewing. Cornelia was expecting her fourth child.


January 7, 1861. Atheline & I tacked a comfort & began another....considerable excitements going on now in politics on account of a Black Republican being elected president [Abraham Lincoln.] 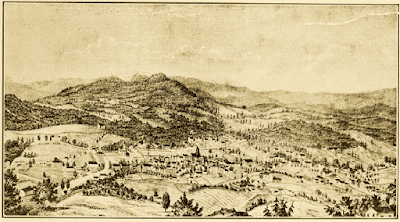 The following month Atheline and Cornelia began a quilt for Atheline.

February 21. Cut pieces for Atheline to begin her a quilt....Old Mrs Parker was here this evening & borrowed our quilting frames....

February 23. Pea [Cornelia's young son Pinckney] staid down here with Atheline tonight. She finished her quilt or at least the squares today.

Cornelia's family lived on the grounds of the Sulphur Springs Hotel, which
burned in the first year of the war.
This picture shows the second hotel
built in the 1880s.

We can assume Atheline pieced and quilted her quilt in about a week with some assistance from Cornelia.
In March:

March 6. I worked some quilt pieces in evening for Atheline to piece me a rag quilt.

The following winter Atheline married on January 4, 1862. Cornelia wrote in her diary:

Atheline & Jim married tonight. They did it on the sly order. Mrs. Fanning & I went down to Fannie's house to see it.

In March, 1862, Atheline prepared cotton batting for a top and readied it for the frame. The quilt was "put in" and got out in the last week of the month.

March 24. Atheline carded bats for her quilt which she will put in tomorrow.

March 25. I helped Atheline put in her quilt.

March 29. Atheline got her quilt out before dinner.

March 31. Atheline hemmed on her quilt before dinner

In the fall one of Cornelia's quilts went into the frame.

September 24, 1862. I have been carding bats today to put in my cactus quilt. Atheline helped some. 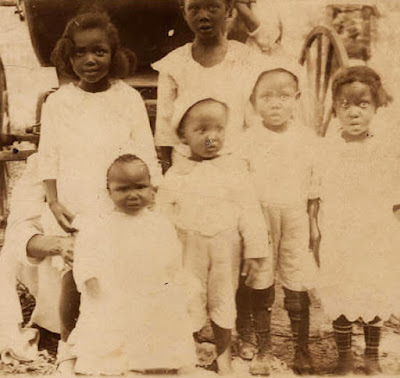 Children from a postcard about 1910 Rockingham County, NC.
From North Carolina Postcards at the University of North Carolina.
Notice the mother's hand on the left, holding onto the toddler.
http://www2.lib.unc.edu/dc/nc_post/index.php

Both women were pregnant in 1863. By the winter of 1864 Atheline had given birth but had not recovered. In the spring Cornelia was pessimistic she ever would.

April 3, 1864. I cut some quilt pieces today of old dress skirts. Atheline will piece it if she gets able. She mends very slow. I fear she will never be well again. She has a dreadful cough. Her baby grows some, it does not suck her at all now.

In June Cornelia was making quilts for the babies. (She eventually gave birth to twelve children.)

Atheline is some better but still feeble. She sits up part of the time. I do wish she could get well once again but I fear she will never be stout again. She has been a good nurse to me & the children.

June 22, 1864. I sewed on the crib quilts today. Dr Logan was here today. This is his 4th visit to Atheline. I don't think he does her any good whatever. She is very feeble. I fear she has consumption.

I feel so sorry when she asks me how long before she will be well. ...I hate to see her pine away & think she must die.

July 16, 1864. Atheline died this morning about half past eight. She went very easy. She died very easy. She was 19 years old last December 21st day. Jim takes if very hard.

July 21. I have done nothing today. I made a white bow for Atheline this morning. Mrs. Fanning, Betsey McKinnish, Fannie & Jinnie dressed her very neatly. I had a pair of my fine stockings & a nice pair of gloves put on her & gave her a sheet. She has been kind to me & my children. I loved her for loving them. 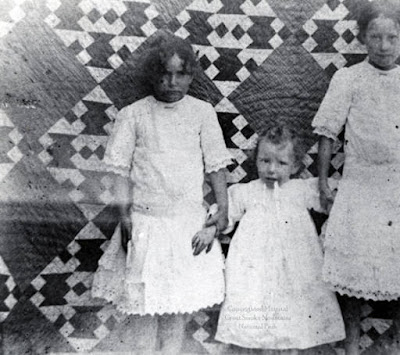 See more about the cemetery where Atheline was buried.

Cornrlia's account of her feelings as Atheline's death nears is very touching. This part of her diary is copied on the findagrave memorial you link. This is definitely a diary I will read. Your link to WCU for the collection of photos etc. is broken, WCU redesigned its wesite.

How sad, but good to know she was cared for and appreciated by Cornelia. Did her baby survive? I will have to find a copy of that diary.

Life was so hard back then but yet it is so interesting to read about. I need to get back to my civil war quilt. I have 3 projects to do before I can quilt again. You have such an interesting and full of history blog. I enjoy it so much. Hugs, LJ

I just finished reading The Kitchen House by Kathleen Grissom not too long ago and this diary excerpt makes it all seem very vivid. I wonder what she meant that Atheline got married "on the sly order". I suppose they didn't tell their owner about their relationship. Wouldn't you love to see the quilts Atheline made?

What a wonderful post. Thank you for bringing Atheline to light.

How very interesting. I'm not that far west of Asheville - about 3 hours. I will have to go look at that cemetery next spring.

Thank you for the history. Cornélia and Atheline were very close and confident. It is a real story.