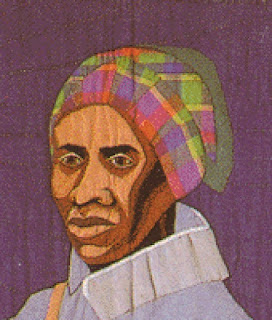 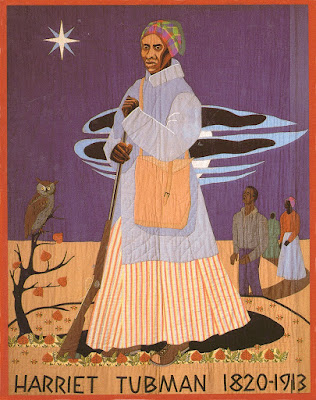 Ben Irvin, a San Francisco architect and later head of the Sausalito Arts Center, drew the designs. The first was Harriet Tubman. 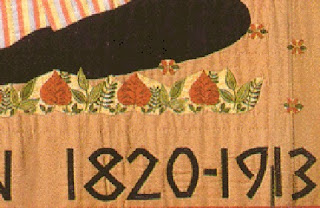 Marin City was a relatively new place in 1950, a shipyard community that grew up in World War II just north of San Francisco. After the boom days people continued to live in government housing in an ethnically mixed community. 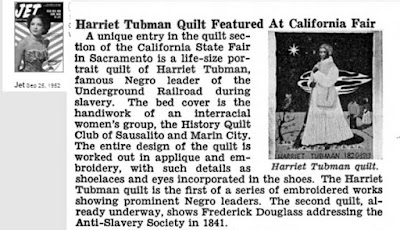 Jet Magazine published a photo of the Tubman quilt in 1952, noting it was entered in the California State Fair.
"The bed cover is the handiwork of an interracial women's group....The first of a series of embroidered works showing prominent Negro leaders." 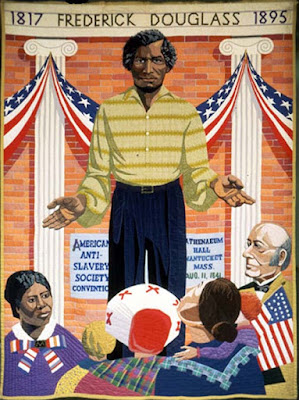 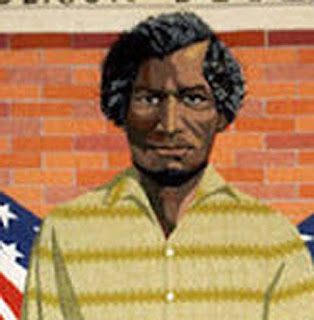 Anna Murray Douglass listens to her husband on the left and Abolitionist newspaper editor William Lloyd Garrison is at right. 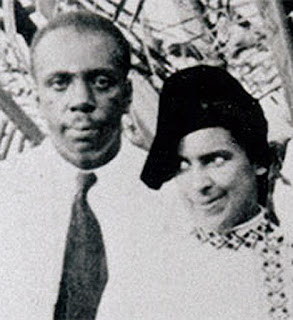 Sue Bailey Thurman from San Francisco showed the quilts around the country in the 1950s. They were exhibited in the 1970s in Marin County and postcards made of them. I can remember what an inspiration they were to textile artists using cloth to create pictorial images.

Sue Bailey Thurman was an author, editor and teacher interested in Black history.  She wrote newspaper articles including  "Pioneers of Negro Origin in California" and married theologian Howard Thurman.

She donated both quilts to Emory University's Robert Woodruff Library in Atlanta.
Read more about the quilts here:
http://www.americanpopularculture.com/archive/politics/quiltclub.htm

The portrait quilts look so contemporary! Thanks for posting the story. (I clicked on the link and read the entire account.)

What a wonderful tribute! What excellent work! Thanks for showing this to us.

Fascinating story of these impressive quilts honoring two Americans who contributed so much in our nation's history. Thank you for sharing; the linked article was excellent as well!

Thank you so much for this rich and inspiring story. I will share with others.