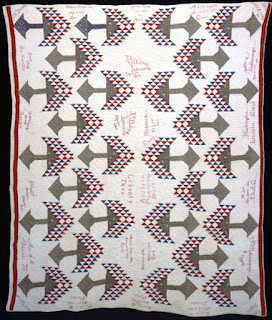 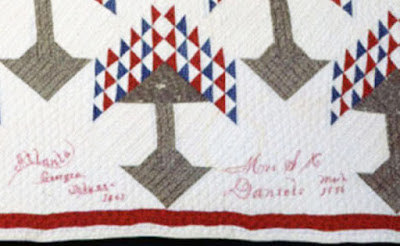 Mrs. Daniels made this fashionable quilt in 1896 according to her inscription in red work embroidery along the edge. We assume she meant March, 1896.

She used a popular pattern of the time, possibly copying
one sold by the Ladies's Art Company 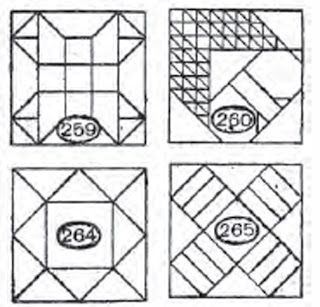 Her pattern is close to #260 above in the Ladies' Art Company
1898 catalog of patchwork designs. They called it "Tree of Paradise" 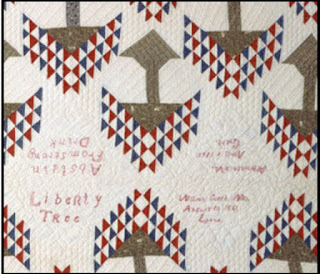 But she embroidered "Liberty Tree" in one of the central blocks. 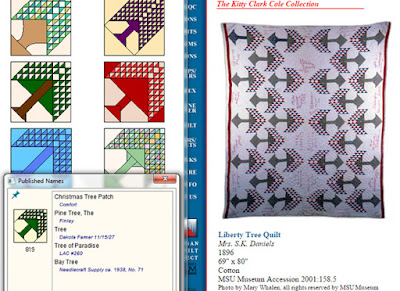 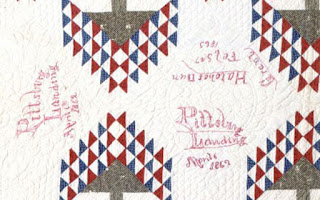 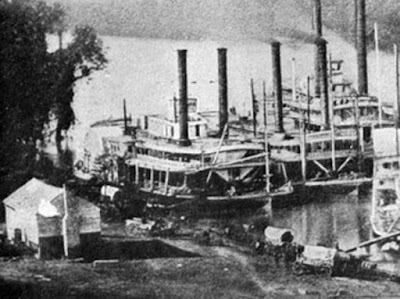 Pittsburg Landing on the Tennessee River near Corinth, Mississippi was
the site of the important battle known as Shiloh in the Confederacy.

It must have meant a great deal to Mrs. Daniels.

Similar inscriptions from other battles include:

Although the dates are during the Civil War, the embroidery style in Turkey red cotton indicates she embroidered them after 1880, a date consistent with another inscription: "Wm McKinley 1896." 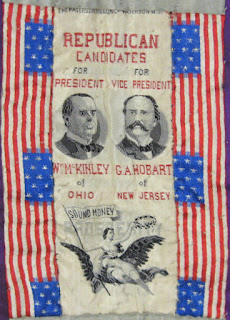 McKinley was elected to his first term in 1896. The inscription might have been a celebration of his November election or an advocacy of his candidacy earlier in the year.
Another embroidered name is recorded as "C A Hobert," which probably refers to McKinley's 1896 running mate Garret A. Hobart. 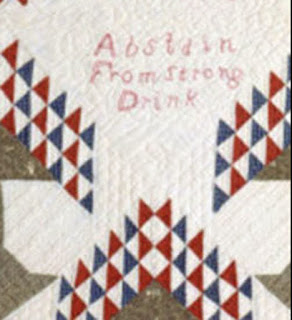 Searching for Mrs. S. K. Daniels in the published records comes up with two:

Could one of these women be the same Republican who called the Battle of Shiloh Pittsburg Landing? If she were indeed a Southerner we'd assume she kept this quilt well out of sight.

The Museum has transcribed the block inscriptions in the center:

Great story and I wonder if the identity of Mrs Daniels could be associated with the other two male names in the list of inscriptions? Maybe relatives?

This is a pattern I would really like to learn how to do..in a rotary and quick sew/cut means...has my wheels turning. Thank you

I would have to assume, if Ms. Daniels lived in the South, she best have HID that quilt :).

The South paid a HUGE price after the War...some folks lost everything down to their land. Both North and South paid with lost lives...so sad and so haunting.

Thank you for this wonderful post... you always give us food for thought Barbara.

I'm not receiving this anymore. Please sign me up..