A Silk Crib Quilt with 32 Stars 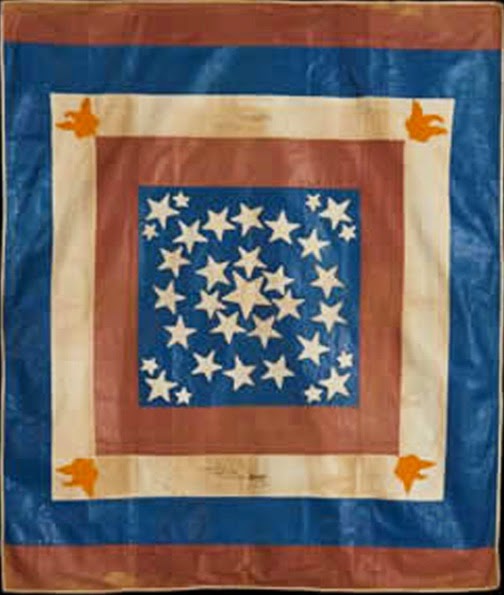 This small flag quilt looks to be silk from the way it reflects light and the way the red has faded to a peach. The gold figures in the white border look to be eagles. 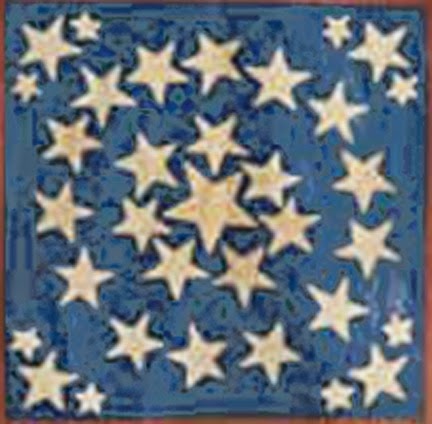 The center field manages to fit 32 stars into the field.
Actually that's 34.

After Minnesota became the 32nd state in May, 1858, the official U.S. flag included 32 stars for a year until Oregon became a state. 33 stars became the official count on July 4, 1859. States were added so fast in the pre-Civil War years that actual flags with 32 or 33 stars are rare.

Is the number of stars a clue to date in a quilt?

Occasionally the number of stars is based on all the stars the seamstress can fit rather than an accurate official tally. It may be that the crib quilt is from 1858 or 1859. It might be from the Civil War years when 34 stars celebrated Kansas's statehood from 1861 to 1863. West Virginia was symbolized with 35 stars from July 4, 1863 until after peace in July, 1865.


Or the star arrangement is an attractive pattern that fits the blue field in question.

How neat. Great info about the number of stars. It's great to know that even many years ago, crib quilts were made. It us a nice tradition that many of us still do for the newborns :)

What an elegant looking crib quilt! I thought I counted 34, but maybe the small stars do not count?

Barb, have you ever checked out the crib quilt I saw in Franklin, TN attributed to Mrs. Jefferson Davis, Mrs. Robert E. Lee, Mrs. Margaret Howell, Miss. Maggie Davi, Mrs. Henry S. Foote and Mrs. Rachel D. Seay. It is held by The Battle of Franklin Trust Quilts and features a star pattern? Very interesting as the center of the stars are velvet!

I haven't been able to find out much about the quilts in the collection of the Battle of Franklin Trusts. If anyone has any links let me know.