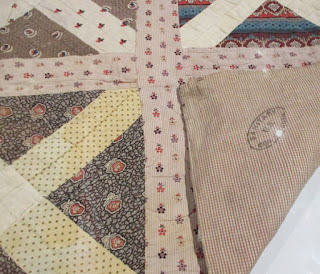 Fisk Quilt, 1864
On Exhibit at the Pasadena Museum of History.
The Sanitary Commission's stamp is on the reverse.

During a recent trip to Los Angeles I saw two historical exhibits about the Civil War in the west. I was surprised to find five Civil-War-related antique quilts 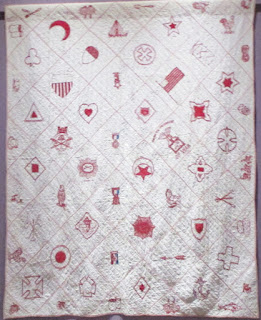 Red work quilt with unit badges from the
Grand Army of the Republic
Veteran's Organization, about 1900, also at the
Pasadena Museum of History. 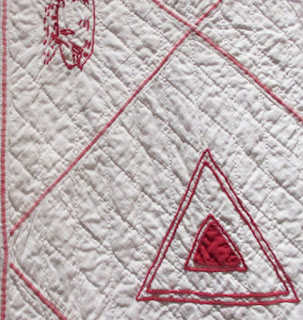 Two more quilts are included in the show When Johnny Came Marching West: How the Civil War Shaped Pasadena, which runs through September 20, 2015.

Detail of a Confederate applique quilt made by
Susan Robb,1861-1862.
Collection of the Museum of Texas Tech University

The Autry Museum in Griffith Park features a show called Empire and Liberty: The Civil War in the West. There's only one quilt in this large exhibit but it's spectacular.

This exhibit will be up through January 3, 2016.
http://civilwar.theautry.org/ 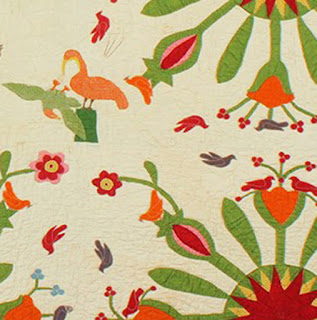 Another detail of the Robb quilt shows an orange pelican (or stork?),
a  Southern symbol, vanquishing the green eagle.

To see a large picture of the Robb quilt click here:
http://worldquilts.quiltstudy.org/americanstory/node/6268

I'll show you more about the five quilts over the summer.

The pelican is the State bird of Louisiana, which was occupied by the Yankees for quite some time, as you know from your earlier posts:-)

Thanks for the link to world.quiltstudygroup. I spent way too much time reading through all the informative articles.

Like Donna I followed your links and found an hour or so passed away in no time. Thanks so much for bringing the information to the general public. Greatly appreciate your sharing.