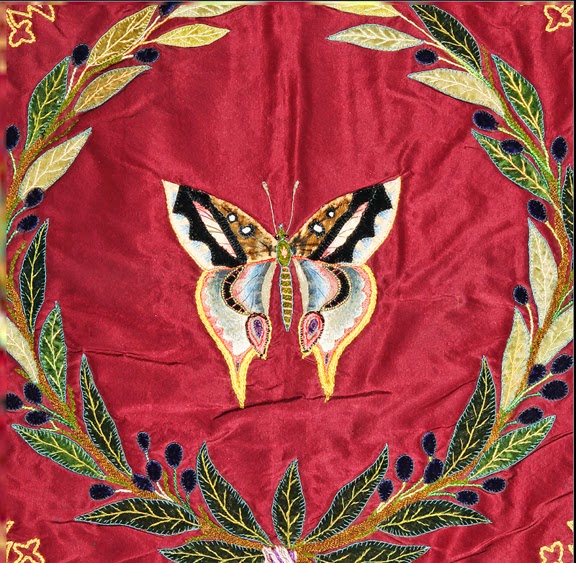 Butterfly symbolizing the "soul of the
Confederacy beautiful and immortal."
Embroidered silk quilt by Varina Howell Davis
about 1865-1880.
Collection of the Museum of the Confederacy. 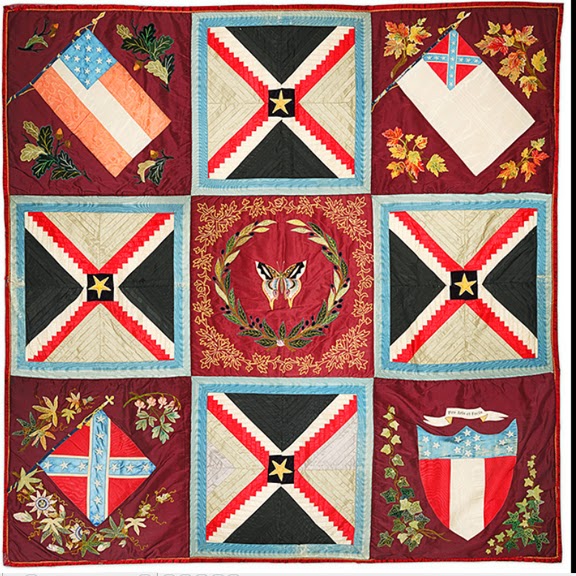 This quilt of nine silk squares is a treasure of the Richmond museum housed in the Confederate White House where Varina Davis spent much of the Civil War as First Lady of the Confederacy. 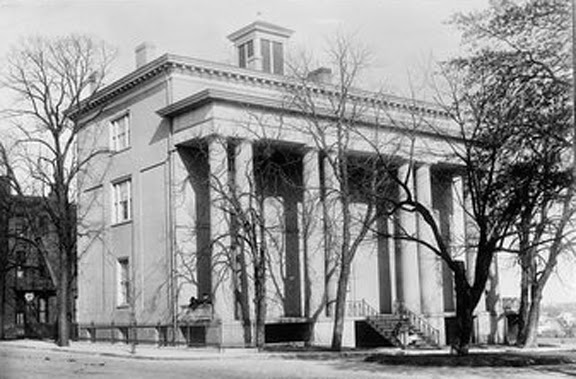 There are several written records of Varina Howell Davis  (1826-1906) and her sewing. She told friend Mary Chesnut in 1864 that she was too distracted and miserable to read, "But I sew hard." 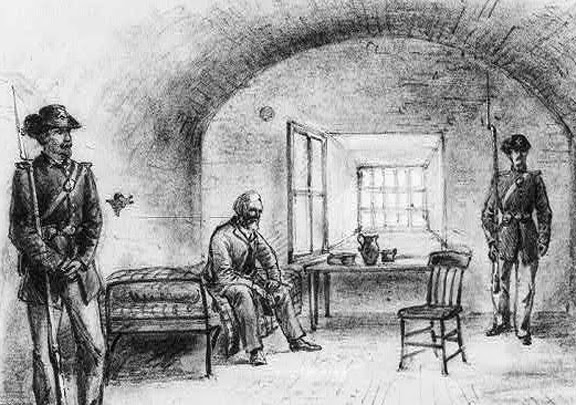 Drawing of Jefferson Davis in prison by Alfred R. Waud.
Library of Congress

After the surrender of the Confederacy in 1865 husband Jefferson Davis was imprisoned at Fortress Monroe near Norfolk,Virginia. Varina and her baby lived in quarters near him, "a wretchedly dull place," she wrote. 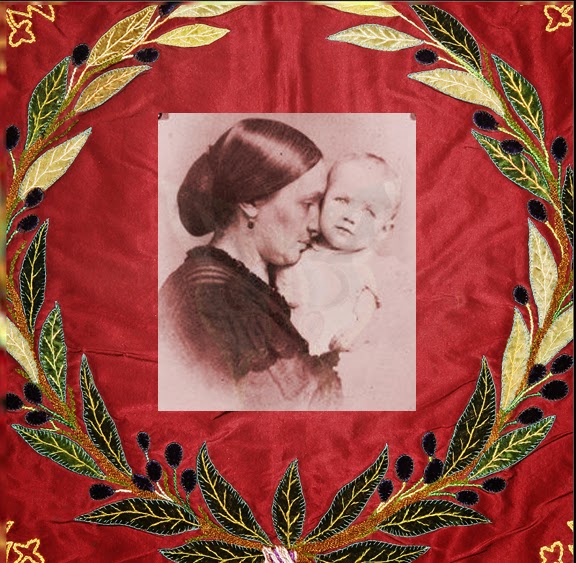 Varina and her namesake daughter,
called Winnie, born in June, 1864.

In her misery, she began working on a new quilt. The first task was gathering fabric; she wrote a friend requesting that mutual friend Lydia Johnston send pieces of silk dresses, "the oldest fashioned silk she has will do...the size of the scrap I send. I am making a quilt, and each square is to be a memory of better days."

Varina, about forty years old, apparently associated quiltmaking with aging. Always an articulate writer, she quoted Shakespeare in alluding to the autumn of her life. Making a quilt

"is my first symptom of the sere and yellow leaf which has been content with my body, and until now left my mind untarnished."

My guess is that this quilt of nine embroidered squares is the piece she began in Norfolk in 1865. The brown squares may be the fabrics from General Joseph Johnston's family. 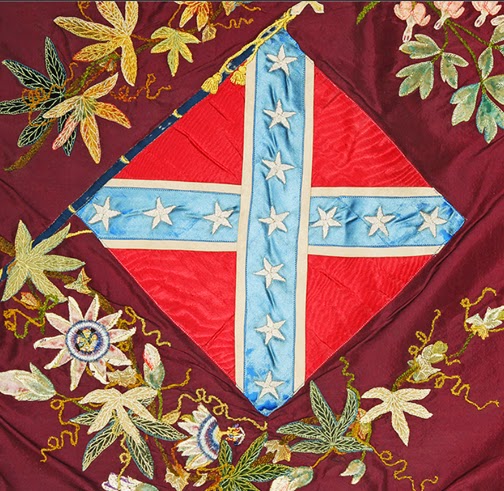 Varina complained about her sewing skills in such a difficult period, writing that she spent her time "Sewing a little, but rip it out, knitting a little, but ravel it." However, the embroidery and applique on this quilt is magnificent. It may have taken her years to finish it.

You can enlarge the pictures and look at every detail. 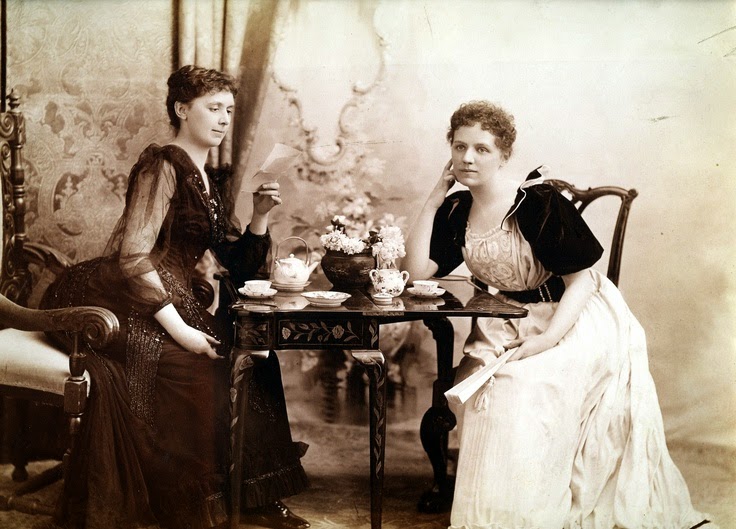 In 1925 Margaret's daughter Varina Davis Hayes Webb (1879-1934) donated the quilt to the Museum of the Confederacy with notes describing the symbolism in the imagery---the passion flowers, ivy, oak and bleeding hearts. 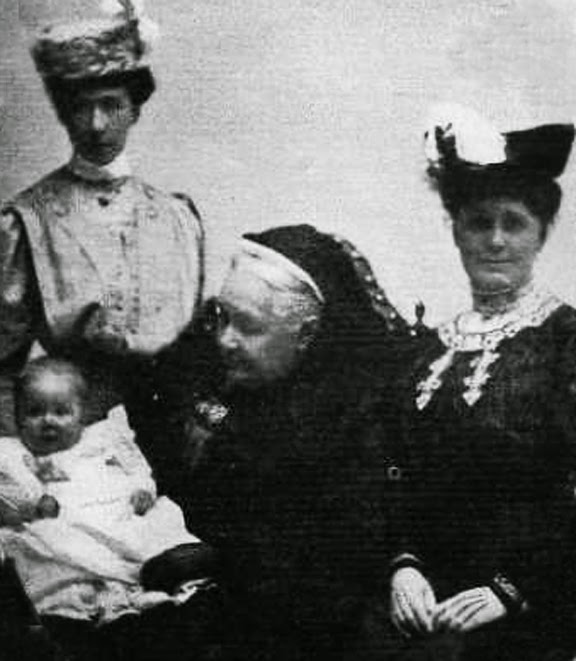 In this 1906 photo Varina Howell Davis, nearly 80 years old, poses with daughter Margaret Davis Hayes on the right and granddaughter Varina Hayes Webb on the left. The baby is Varina Margaret Webb.

How big is this quilt?