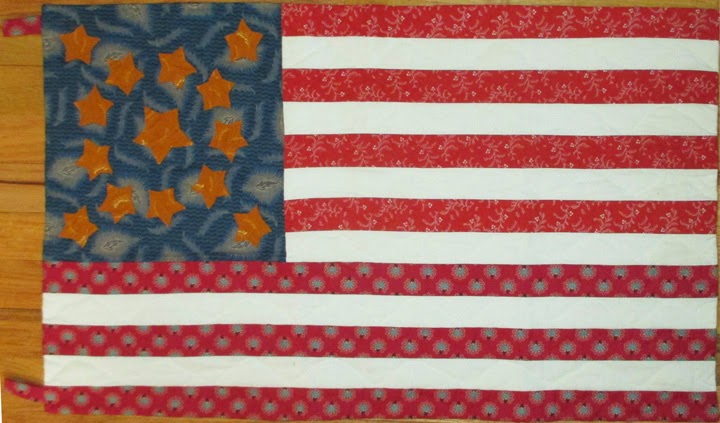 Linda made this flag as a sample for my 1997 book
Quilts from the Civil War. 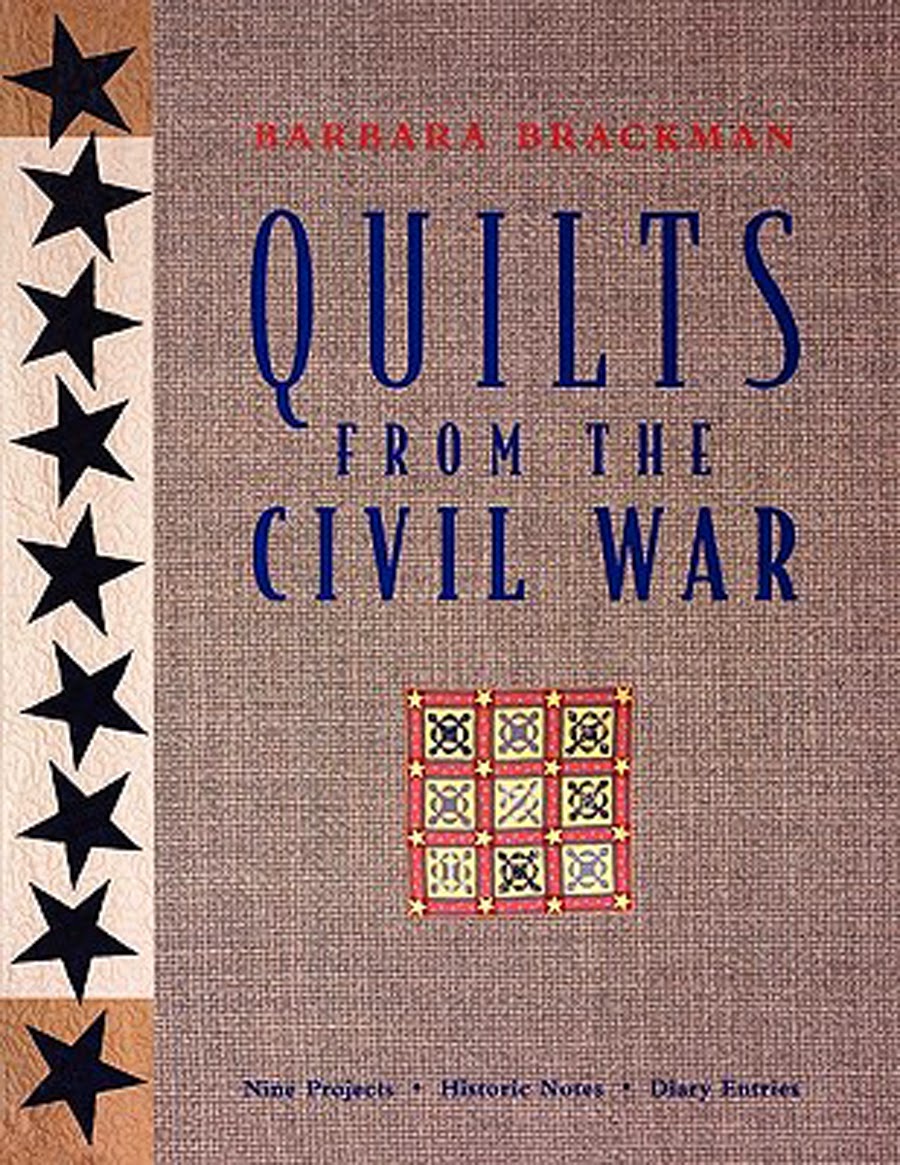 Co-author Terry Thompson and I had found a fragile
old calico flag in the Weston Historical Museum. We couldn't get
a photo of it so we made several copies. 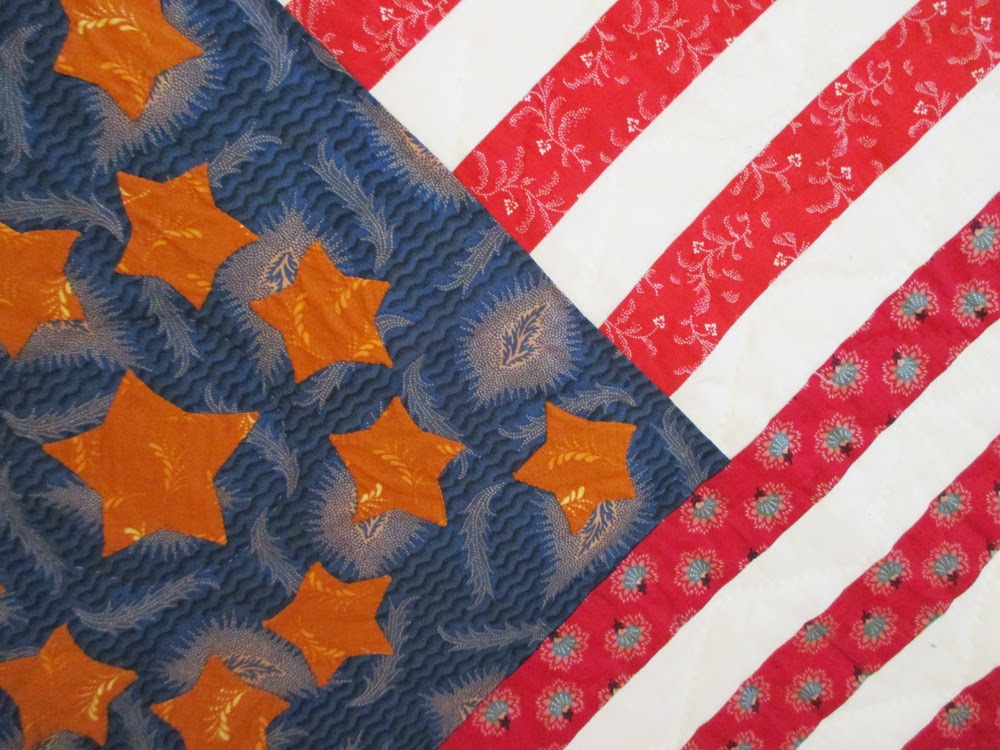 Linda's looks very much like the original which
was pieced of Turkey red stripes in two prints. 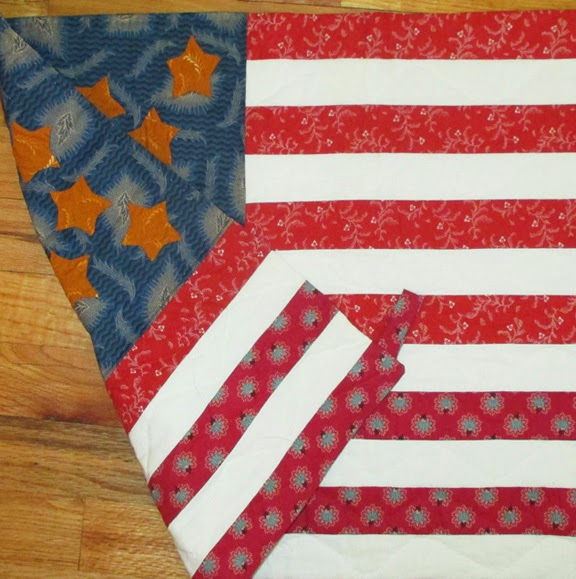 Palmyra's was reversible and had tabs stitched to it.

Palmyra Mitchell's family recalled the flag's story when they donated it. 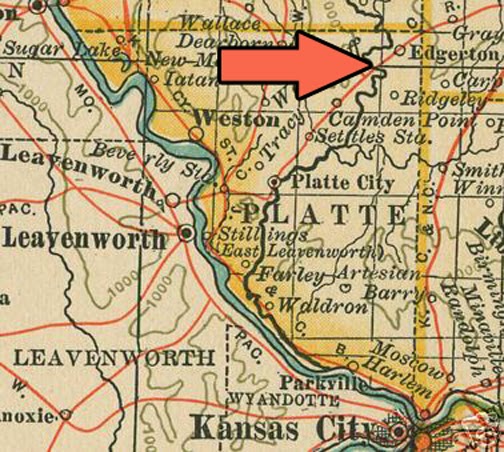 Palmyra and John W. Mitchell lived in Union Mills, a town on the banks of the Platte River, which winds through Platte County, Missouri. The town was flooded out long ago. 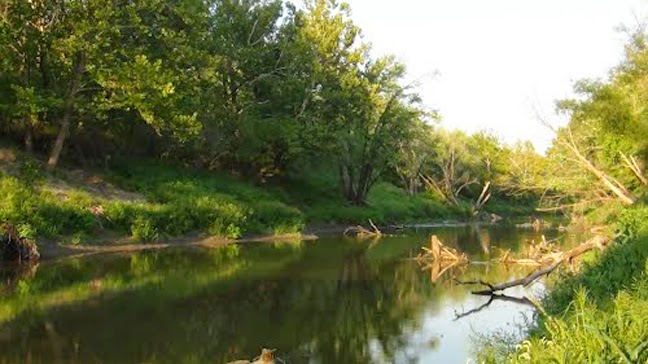 The Platte in Missouri is not quite "a mile wide and a foot deep" as it is along the Oregon Trail in Nebraska, but the river often claims anything built near the channel. 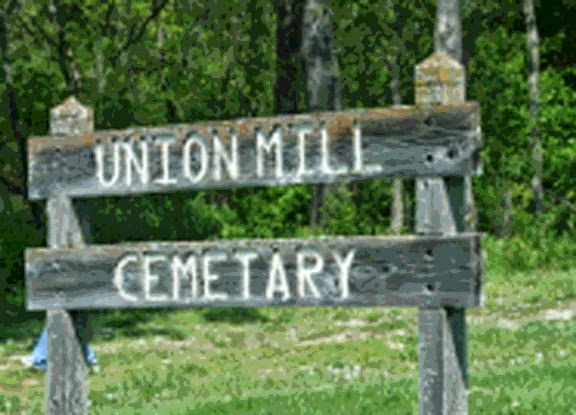 The only site left is a cemetery with many Mitchell
family member's graves.

During the Civil War the Mitchells held Confederate sentiments, like their Union Mills neighbors, many of whom were Kentuckians. But Missouri was a Union state and federal soldiers demanded to see the Miller's Union flag. When none could be produced the troops told them they'd be back soon. If no flag were hanging they'd burn the house. 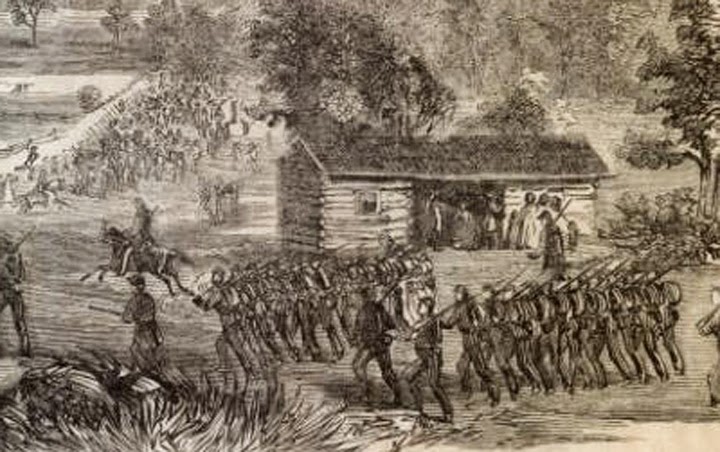 Palmyra ran to the scrap bag and found enough red, white and blue fabric to make a small flag. She quickly pieced thirteen stripes of Turkey red calico and white with a field of a large white star surrounded by thirteen smaller stars.

The flag was reversible and on the side---the edge with the stripes and not the stars--- she added two loops for hanging. When the Yankees returned the flag was on display and the Mitchells' home was spared. The loops indicate that they flew it upside down with the stars at the bottom, but the Yankees seem not to have noticed her small rebellion.

I haven't been able to find any more about Palmyra Mitchell. There are records of a John W. Mitchell in western Missouri who died in 1879 leaving a widow Pattie and children: Hattie B., Mary B., Carrie L., Alex. R., Julia.
And one who married a Syntha Mullins in May, 1852. 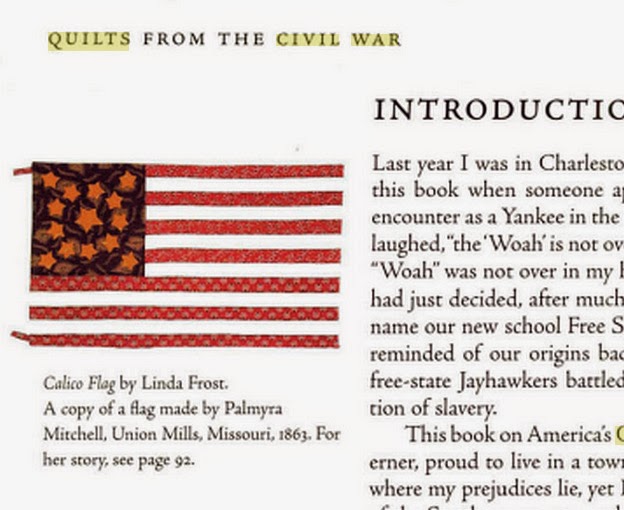 Linda and I are selling the model calico flag made for the book at my Etsy Shop. Click here for more information.
https://www.etsy.com/shop/BarbaraBrackmanShop 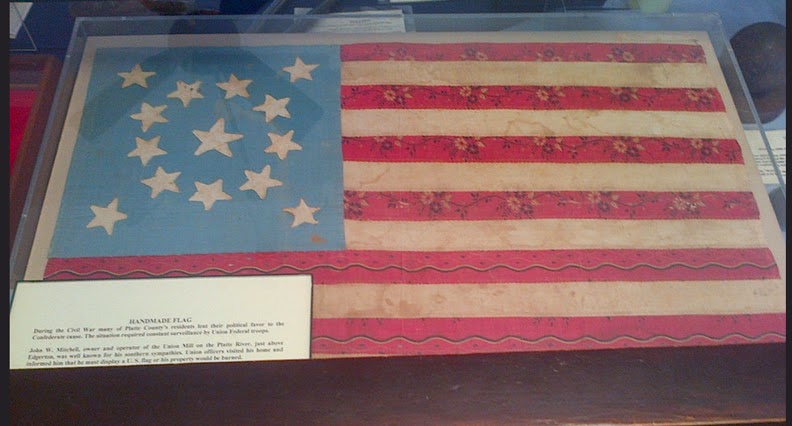 UPDATE: Louise ran out and photographed the flag for us.
I'd forgotten how delightful it looks---even if the story is quite sad.
Anonymous found her death certificate from March 11, 1922.
Thanks TEAM! 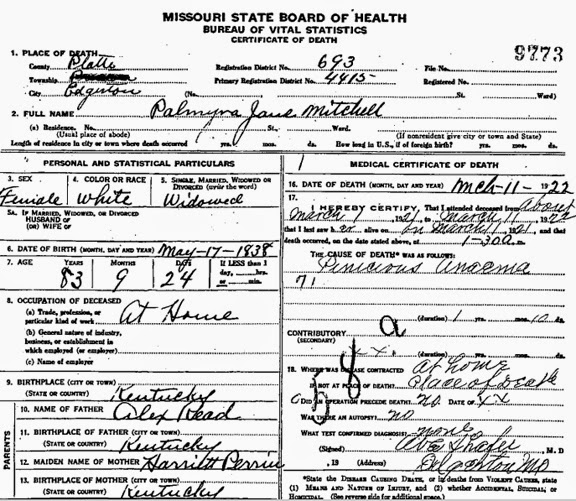 The death certificate tells us that Palmyra Jane died in  Edgerton (where most of Union Mills moved to higher ground.) She was born in Kentucky on May 17, 1838, and her maiden name was Palmyra Jane Read. She was about 27 when she made the flag. And the last update is that Polly Mello bought Linda's flag and we know it has an excellent home.

Our library carries your books and i went to get one and it has disappeared. I guess people want their own copy and steal them. Love this quilt and the use of different fabrics. Also, a fun story behind it.

Thank you for sharing the link to Palmyra's death certificate. I love history and old records are a tangible link to another time and place. Perhaps it's weird to like reading death certificates, but there's much to learn there - a long life and the cause of death, which I had to look up. Thanks, Barbara, and others who keep her memory alive through her flag.

So checking my e-mail last night after midnight because I couldn't sleep, I read about Palmyra Mitchell's flag in the Weston Historical Museum. Totally wonderful post, and Oh Happy Day! I had already arranged to meet a friend in Weston today and show her around.

I couldn't get any solid intel on whether the museum had opened yet for the season, but it has - it opened yesterday - and what a joy it was to see "The Flag" up close and personal.

I felt quite emotional as I thought about having to go to my scrap bag (well, okay, ridiculously enormous stash) and make a flag to prevent my home from being burned. "Threads that Bind" in a big way.

The staff at the museum gave me permission to photograph the flag with my camera phone (I hadn't come prepared with a "real" camera") as long as I turned off the flash. Which I gladly did. I hope they were right to allow that (Barbara, tell me if they shouldn't have, please). The flag is protected under two layers of glass; one encasing the flag itself, and another layer of glass which is part of the cabinet itself in which the glass-encased flag is kept.

I've put the photos in my Flickr photostream, and any glare you see is not from flash but just from the reflection of the glass and a sunny day, I guess. It was shining that way before I ever took the photos. No flash used!

Here's a link to the entire flag in my photostream, and there are two other photos, one of the upper stripes, showing the fabric, and the other of the lower stripes:

Thank you, Barbara, for so serendipitously making our afternoon in Weston extra special :)

Louise-I'm posting one of the photos. I believe you didn't use a flash. The glare is the glass and perhaps a reflection of the light the camera uses to focus. I was just at the DAR Museum in D.C. and they let us photograph with flash. Many curators now think it really doesn't hurt the quilts. Thanks for taking it and posting it. I'd forgotten what it looked like. Really a wonderful piece.

Whew, thanks, Barbara :) Now you need to design a reproduction line featuring those two turkey reds so we can make our own copies ;-)