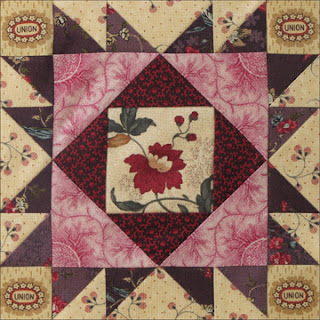 Union by Becky Brown
This block, which dates back to the late 19th century, may have been known as Union or Union Square back then, a commorative Civil War design. We can use it to recall an important change in the Union Army 150 years ago. General Winfield Scott resigned as general in chief during the last week of October, 1861.
Scott's last meeting with the Cabinet
from Harper's Weekly, 1861
His replacement was General George B. McClellan, who had served under Scott in the Mexican-American War of the 1840s. After the Union's Bull Run disaster was blamed on rookie soldiers, McClellan had earned a reputation creating an army with discipline. He won some minor battles throughout the summer.
November 3, 1861
Alfred Waud's drawing of a torch light parade in front of McClellan's house to celebrate his promotion to General in charge of the Union Armies. Torchlight parades were popular political events, as were "illuminations" in which householders put a light in each window facing the street. The fireworks display includes an eagle, flags and a portrait of the General.
On the morning of November 3rd McClellan wrote his wife a letter:

"I have already been up once this morning—that was at four o'clock to escort Gen. Scott to the depot. It was pitchdark and a pouring rain ; but with most of my staff and a squadron of cavalry I saw the old man off. He was very polite to me; sent various kind messages to you and the baby; so we parted. The old man said that his sensations were very peculiar in leaving Washington and active life. I can easily understand them; and it may be that at some distant day I, too, shall totter away from Washington, a worn-out soldier, with naught to do but make my peace with God. The sight of this morning was a lesson to me which I hope not soon to forget. I saw there the end of a long, active, and ambitious life, the end of the career of the first soldier of his nation; and it was a feeble old man scarce able to walk; hardly any one there to see him off but his successor. Should I ever become vainglorious and ambitious, remind me of that spectacle."

For a while McClellan was the man but his arrogance and cautious leadership caused Lincoln to fire him months later.
September 17, 1862
Lincoln visiting McClellan in camp
From the Library of Congress
One of my favorite Civil War pictures shows the woven coverlet McClellan slept under in his tent. McClellan and Lincoln held each other in contempt. McCellan ran for President against Lincoln in the 1864 election, promising peace negotiations with the Confederacy. Lincoln won.
Union (BlockBase #2056) was given that name by the Ladies' Art Company in the late 19th century. Other names are Union Square and Four Crowns.
Cutting an 8" Finished Block 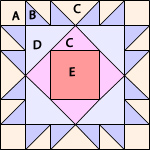 D  Cut 2 medium dark squares 3-1/2". Cut each into 2 triangles with one diagonal cut. You need 4 triangles. 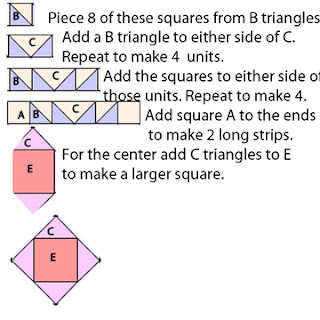 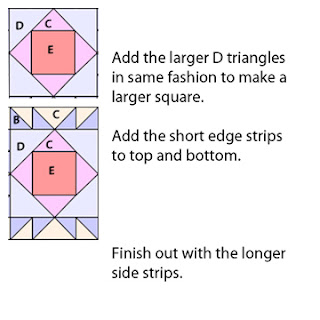 Campaign art from the 1864 Presidential election 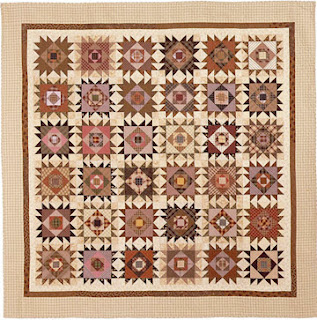 Union Square by Pam Mayfield
Pam Mayfield loves this block.
She's made several---with more squares inside of squares in the center. 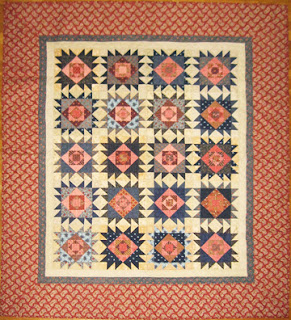 Union Square top by Pam Mayfield
Posted by Barbara Brackman at 6:00 AM

wow what a beautiful block, i look forward to making it!!

Love, love this block! Thankyou so much for this quilt along, it has challenged me with new blocks and I've loved putting the fabrics together. Your little vignettes of Civil War lives and times have been wonderful to read. Many thanks and kind regards, Rowena (Australia)

This makes a very impressive block. I have completed my block and posted it along with a how-to on my blog.
http://lillianscupboard.wordpress.com/2011/10/30/civil-war-quilt-block-44/

That's a favorite block of mine, and I love the union in the corner squares. When I saw the line, I wished there were a "Confederate" or a "Rebel" fabric in it, too. Pam's quilts are lovely.

Almost 30 years ago I used this block for a wallhanging for some dear friends--and overdyed it in tea (because I didn't know better) so it would look old. I *love* the "D" patch in Becky Brown's block. Isn't that one of your P&B fabrics from 20+ years ago?

I love this block and, in fact, purchased the pattern for the Pam Mayfield quilt a while back - I just haven't started it yet! This inspires me to make it my next quilt. It's such an appealing block and the pattern allows for more or less squares in the center or just the squaresin squares without the outside half-triangles.
Linda Kay

That D patch is from my current Moda Civil War Reunion line. Aren't Pam's quilts good! She's probably made 4 with the Union block.