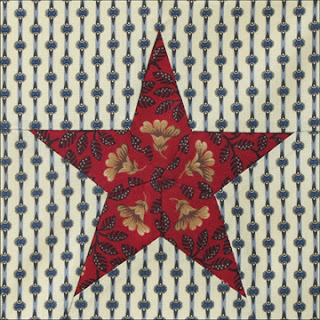 Red, White & Blue by Becky Brown
Every Civil War sampler needs a pieced star block. This week's pattern was published as Red, White and Blue quilt in the agricultural magazine The Orange Judd Farmer in 1898. (An odd name for a magazine but Orange Judd was the publisher's name---also an odd name for a man.)
Several patriotic quilts with pieced and appliqued stars survive from the 1861-1865 years.
Quilt by Cornelia Dow and others, Portland, Maine, 1864
This quilt (the stars are appliqued) was first published in the groundbreaking book about women's history called Hearts and Hands by Pat Ferrero, Elaine Hedges and Julie Silber. The star blocks are covered with inked sentiments about the Union cause, many patriotic, many amusing. The book pictured a block with the pun: "While our fingers guide the needle, Our thoughts are intense (tents)."

The authors attributed the quilt's organization to Cornelia Dow (1808-1883), wife of a Union General who had been released from Libby Prison in 1864. Her husband Neal Dow wrote an autobiography in which he described his wife.


"When not quite twenty-six years of age, having secured sufficient means to justify the establishment of a home for myself, I married Maria Cornelia Durant Maynard, on the 20th of January, 1830. My wife's father, John Maynard, was born in Framingham, Mass....went to St. Croix when a youth, and there met, and in 1789 married, her mother, Mary Durant, born in the island of St. Croix in 1771....Returning to this country with his wife and several children, Mr. Maynard, who had in the meantime accumulated a fortune, took up his residence in Bulfinch street, Boston, where his youngest child, Maria Cornelia Durant, was born June 18, 1808.....My wife's father, having met with financial reverses, was obliged to break up his home in Boston, and came with his family to reside on a farm...in Scarboro, Me. Maria Cornelia went to live with an aunt, for whom she was named, and [at sixteen] to Portland to pursue her studies in a private school for young women...."

The Neal Dow Memorial on Congress Street in Portland
In 1829 Neal Dow had this house built in anticipation of his marriage.Today it's the home of the Women's Christian Temperance Union, a monument to Dow and his temperance work. (He was mentioned as originator of the Maine Law on Ken Burn's documentary Prohibition on PBS this week.)
Maria Cornelia was 56
when the quilt was made.
Undated photo from her husband's autobiography
Cutting an 8" Finished Block

The block this week is BlockBase #3677. It requires template piecing.
See the templates in the PDF by clicking here:
https://acrobat.com/app.html#d=UmrlEGwbeyz5kyW2Q*mSmA
Or click on this picture and print it so it measures 8" along the top line. 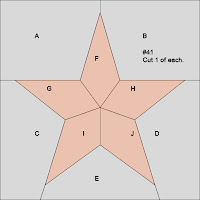 Becky, an excellent seamstress, shows us how she put this together. EQ draws patterns like this with a  separate pattern piece for each shape. Because she is so good she fussy cut each piece and then lined up the stripes and the flowers. "I loved the challenge of piecing this block, " she writes. This is a challenge you do not need to tackle---unless you want to. Small over-all floral calicoes would be easier to work with. 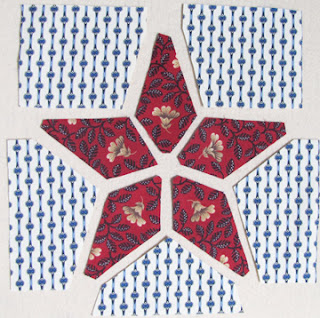 Becky: "At first glance it may appear that all 5 star points use the same template, but there are 3 templates for the star. I cut all the pieces and lightly marked the pattern letter on the back of the star pieces." 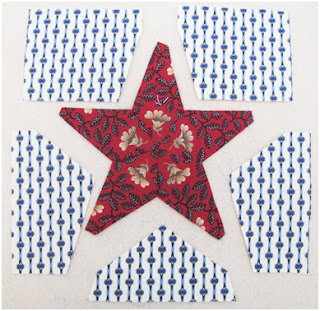 She stitched the star together first and then added the set-in pieces one by one.
"You will notice I basted a white thread in F, (to mark it as the top) and added the pieces clockwise. F to H, H to J, etc. "
You can always applique it.

Two other Maine Civil War quilts were on display this summer.


This flag quilt was made by the Ladies Aid Society of the First Church in Belfast, Maine in 1864 and sent to the Armory Square Hospital in Washington, D.C., where it was displayed for sick and wounded soldiers. In 2011 the quilt was donated to the Belfast Historical Society and Museum.

This Civil War patriotic quilt was made by the Ladies Aid Society of Portland about 1864
Collection of the Brick Store Museum, Kennebunk, Maine.
Among the verses inked on it:

Ye have fought our battles for us, Showing how the brave can die.
We are waiting to receive you, When ye lay your armor by.

We’ll stitch with the needle. And fight with the tongue
‘Till every old rebel Is conquered or hung.

Read more about this quilt, which was on display at the New England Quilt Museum during the summer
http://www.brickstoremuseum.org/Feature64_CivilWarQuilt.shtml

We have 12 weeks to go (there are 53 Saturdays in 2011) but don't think the patterns are going to get progressively more difficult. There are still some four-patches on the horizon.

Another beautiful block. I love Becky's version with the fussy cutting,

So much to do but I did not think to put a little comment to thank Barbara for her kindness in giving us all the patrons of these blocks every week. Another twelve and we are already at the end of the year !!!!! not seen passing ....... I enjoyed making this quilt and I just bought the fabric for assembly. Thank you Barbara. Thank you for choosing Becky, she is an excellent seamstress and it gave us every Saturday the desire to do it as well. Mamifleur friendship. (Blog: Embruns et petits points.

I think this is a great one to Applique...Not a fan of those 'y' seams. Mamifleur, reminds me how far behind I am on this one! Thanks Barbara. There should be another double block Saturday coming up soon, huh?

Gorgeous! Once again, I find myself wishing I'd found this at the begining of the year! :)

I have just 3 weeks left, and then all my commitment quilts are done, and I can start on these fabulous blocks! I've been so excited to see the variety of fabrics being used.....and I've been hoarding my repros just for this project! Can't wait!

I groaned when I saw this block, but then I realised it was piecing, yay.
Becky has done a wonderful job making this block and given us some wonderful hints as well.

I love the story of the Dow quilt. Wonderful post, as usual!

Thank you so much for this post. I can't wait to piece the star. You are very generous.

Becky made a beautiful block. I wasn't that happy with mine, but it's completed and posted on my blog along with a how-to.

Great star. I think I'll hand piece it. LOL I'm really going to be sorry when this series ends - though it's the only way I'll ever finish!

Hi Barbara -
I wasn't sure how to contact you with a question. I was wondering if a shop could use your Civil War Quilts block as a "Blocks of the Month" program if we send each member to your site to get the blocks? Will the blocks remain online? Will they be assembled in a book? Just exploring options at the moment for 2012. Thanks~ Amy

Barbara,I haven't been able to save any blocks all summer. I have up to #26. The format has changed and I can't copy them. Is there anything I can do? I really want to make a civil war quilt but I can't make it for awhile. I hope there is a way to copy the blocks.
Thank-You
Ann

I was not able to start a quilt like this or read all the history in 2011, but I am interested in doing so now, in 2014, so thank you for leaving it online. However, I am having a great deal of trouble with block templates and pdf files. I just tried to get the ones for the Red, White, and Blue Star, and found the following message on the site (Are you aware of this, and what will be the solution for future readers?):

All documents and workspaces will be deleted and no longer available.

Does anyone know if Becky Brown has a blog or site? I love what she does!