The Liberator, 1831
Lydia White (1788-1871) of Philadelphia was a pioneer in the Quaker idea of free-labor cotton, textiles and yarns produced not by the slaves of the American South but by wage-earning farm workers.

She maintained a "Free-Labor Store" in the vicinity of 5th & Cherry Streets from 1830 through 1846. Working with fellow Hicksite Quakers she endeavored to find free-labor cottons, sell them as cheaply as possible and convince her fellow anti-slavery activists that it was worth paying a little more for goods produced by requited labor (as they called it.) 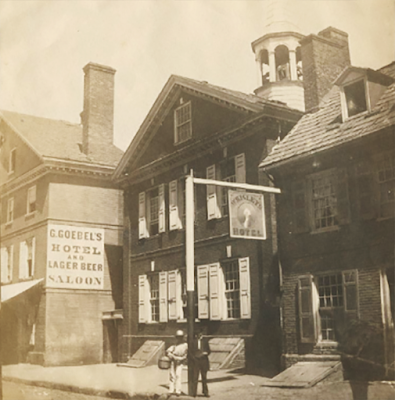 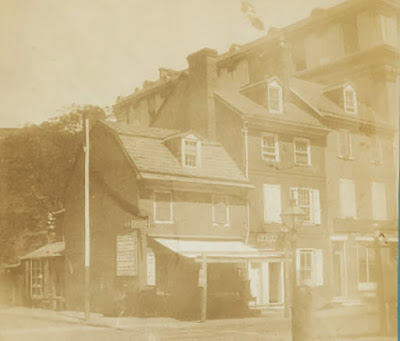 In 1831 Lydia politely complained about the difficulties in her new business plan to William Garrison, editor of The Liberator, who'd ordered some goods:

Letter in the Collection of the Massachusetts
Abolition Collection

"We are very sorry it is not in our power to furnish thee with the articles written for it as truly mortifying to have to say that we have not enough of either of the articles on hand at present worth sending Have been repeatedly disappointed in getting goods manufactured, but do not wish to blame the manufacturers believing the fault lay with us (more particularly the citizens of Phila) whose minds are happily so far [un]enlightened on this deeply interesting subject as to give a decided preference to free labour produce."

"Are daily expecting wadding and Knitting Cotton....The quality of the cotton purchased last spring will not do to make fine shirtings or sewing cotton. A person has commenced weaving some of it on power loom for sheeting and if we find the price will answer intend employing him to weave other goods of such textures as the cotton will admit."

Business improved in the 1840s as Friends sought more free-labor goods to sell and formed the American Free Produce Association that maintained a Free Labor Ware-House. 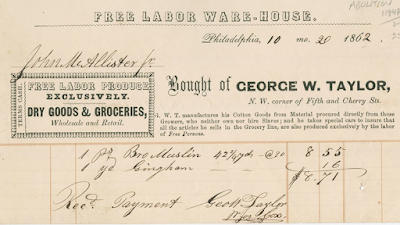 "Lydia White...advertised ginghams, canton flannel, and muslin in several qualities, table diaper, bird eye towels, buff pantaloon stripes, cotton batting, bed-ticking, calicoes, stockings, knitting cotton, lampwicks, and other articles. Most...made from one thousand dollars worth of 'free Texas cotton' which the Association received at the end of 1841. Early in 1843 business had improved so that they were able to reduce prices 10 per cent."
Henry J. Cadbury, "The Free Produce Movement: A Quaker Protest Against Slavery," Bulletin of Friends' Historical Association, Spring, 1943.

Lydia seems to have been a single woman who left few details about her life.

"We have removed our free labour dry goods No 42 North fourth St and bound with our kind friends Joseph Sharpless and wife, find the change very agreeable They and their daughter Mary with my partner Leah Gell wish to be affectionately remembered to thee."

In 1846, nearing sixty, she sold her store to Joel Fisher. 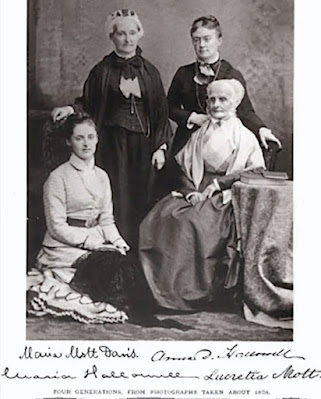 Lucretia Mott's granddaughter Anna D. Hollowell recalled shopping at the free labor stores when she was a child. Quality was an issue for children too.

" 'Free calicoes could seldom be called handsome; free umbrellas were hideous and free candies an abomination. (I have with me a free umbrella and a pocket made of nankeen cotton, free and high priced....Children...preferred good candy to consistent convictions.") Anna D. Hollowell paper published in the Medford Historical Register in 1909

http://civilwarquilts.blogspot.com/2016/09/lucretia-coffin-motts-quilt.html
Posted by Barbara Brackman at 6:00 AM

I'm so glad that there were some good people out there that would make the choice to not support slavery.