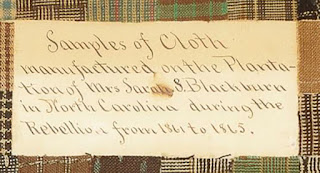 Winterthur Museum has this framed collection of cloth woven at a North Carolina plantation during the Civil War. Saving pieces of the "Homespun Dress" was a relatively common way of recalling the hardships of the Civil War. 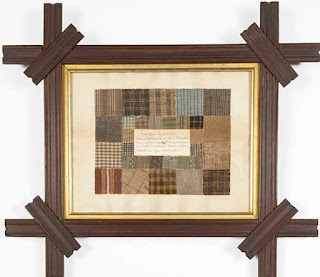 The walnut picture frame looks to be end-of-the-19th century with samples saved and framed by someone after Mrs. Sarah S. Blackburn's death in 1873. 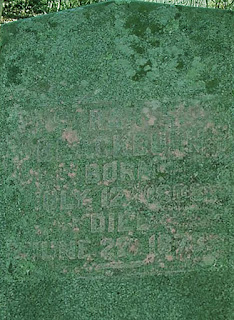 Shortly before her husband's death the census taker recorded him and Sarah (at 52) living with two of their three sons and a daughter (also Sarah S. Blackburn.) A.B. was listed as a farmer as was son William. Not living at home was Augustus W. who was living in Yadkin County to the north. 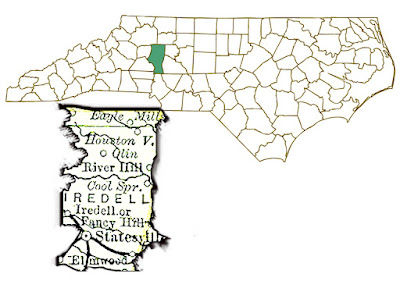 They lived in Iredell County in the Piedmont region of North Carolina, up by Houstonville and Hunting Creek in the northern part of the county. The census did not record A.B. as a rich farmer, our idea of a plantation owner. He is listed with real estate worth $1,200 and other assets of $1,800. Generally these other assets in Southern accounting would have been the worth of the people the family enslaved. 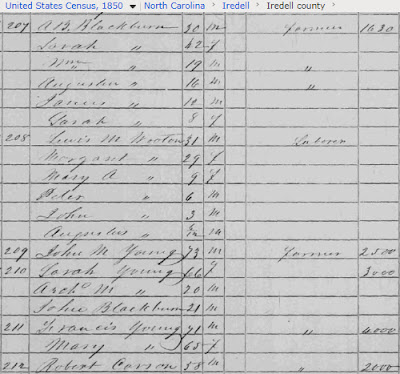 The census ten years earlier shows him as less successful than his farming
neighbors, wife Sarah's family the Youngs. Another
wealthier neighbor was Robert Carson with $2,000.
The 1860 census counted 4,177 enslaved people in a county of 15,000, making up 27.2% of the population. I could not find any Blackburns listed as slave owners in that census but that is not to say the listing is not there. The Youngs of Iredell County (perhaps related to Sarah) are listed with many bondspeople.
However, we do see clues to slave ownership in the Blackburn family in the next county with son Augustus W. Blackburn. Did he have a liaison with the enslaved Fannie Blackburn, described as of African and Cherokee heritage, who was held at the Hampton/Cowles farms in Hamptonville, Yadkin County. Fannie and Augustus are reported to have had at least two sons who've been well documented. 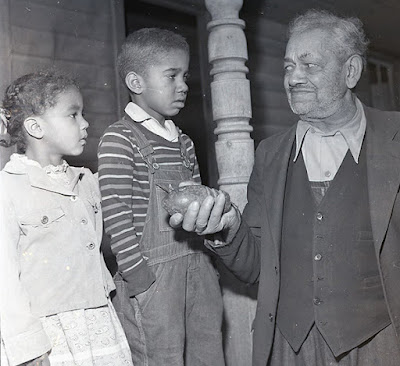 Iredell County Public Library Collection
Alfred Blackburn (?-1951) and grandchildren photographed in 1949.
He is probably about 90 here. 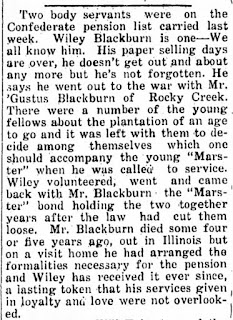 1935, Statesville Record
More confusion: Mr. Blackburn (Augustus) did not die in
Illinois but in Missouri.
The freed Blackburn men were remembered well in Iredell's largest town Statesville for many years. Wiley sold newspapers in Statesville and married Carolyn Carson, who may have once been enslaved by Robert Carson, a neighbor shown in the 1850 census. 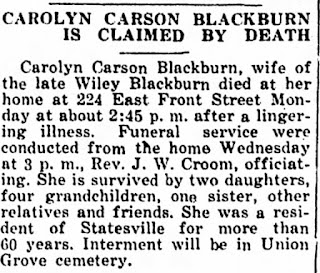 In his youth Wiley received local press for his nighttime brawls and in his old age for his story-telling. 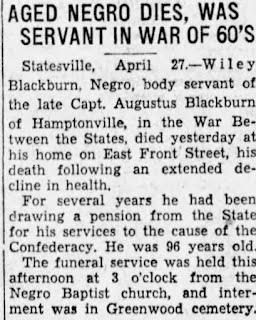 Alfred was a mail carrier. He married Carolyn Carson's sister Lucy in 1880. He was also a raconteur who gained fame for his great age and war stories. He is reported to have died at 108 or 113 but his true age is in doubt. Both Alfred & Wiley were awarded military pensions for their Civil War records as servants, an unusual development. 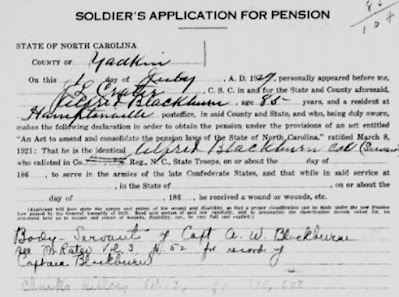 Alfred's pension application in 1929. At that time he was living
in Hamptonville.

Adam H. Domby in his 2020 book The False Cause: Fraud, Fabrication & White Supremacy in Confederate Memory makes a good argument that Wiley and Alfred lied about their service to obtain the pensions. Domby points to Alfred as 10 and Wiley as 14 in the 1870 census, meaning that the boys were about 3 and 7 years old in 1863. 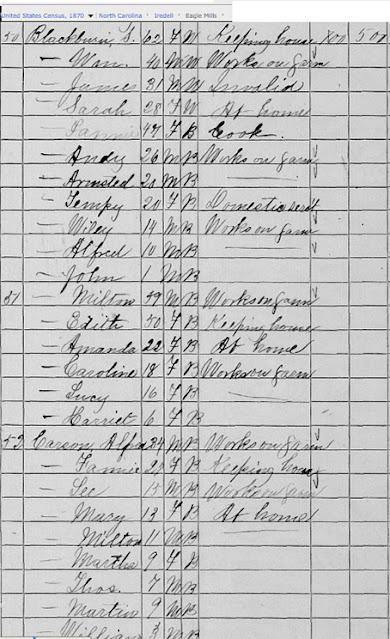 The 1870 census shows us a lot about Blackburns white and Black. Five years after the war the widowed Sarah at 62 is managing the farm. She has assets of $600 and a rather large household in numbered dwelling 50 here. Son James at 31 is an invalid, perhaps a casualty of the war. Daughter Sarah who never married still lives on the farm at 28. Seven African-Americans are listed at her house with the cook Fannie and Tempy a house maid, and the older ones working on the farm. All those Blackburns from 26 to 6 may be Fannie's children, including Wiley and Alfred.

Next door in dwelling #51 are more Blackburns (?) a family headed by Milton and Edith. The Carsons are still neighbors. These are not the wealthy white farmers from before the war but probably freedpeople. Milton and Edith may not be named Blackburn but rather Carson as they have two daughters Lucy & Caroline, the Carson sisters who eventually married Alfred and Wiley. 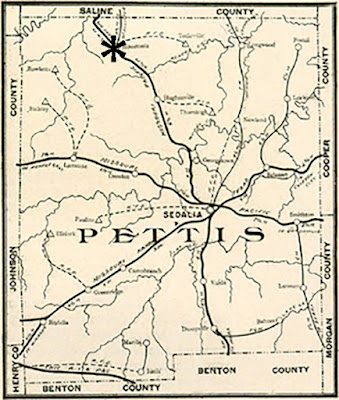 Houstonia is north of Sedalia, Missouri
Augustus, Sarah Blackburn's son, is not living in North Carolina. He set out for Missouri, where he was quite successful in the town of Houstonia. 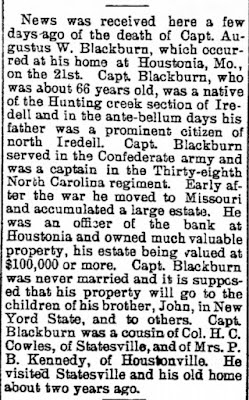 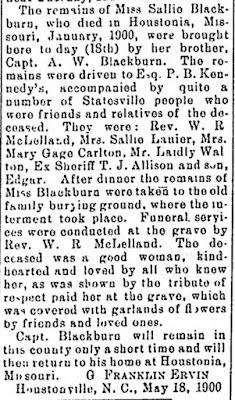 Sister Sallie joined him in Missouri, where she died in 1900
How many other pensioners received a monthly check by lying about their age and their Civil War service? Certainly, as the Blackburn brothers knew, old war stories were an entertaining topic, even if one had to make them up. The idea that one might profit from the tales is intriguing.
See another post about a veteran exaggerating his age here:
https://civilwarquilts.blogspot.com/2021/05/oldest-living-civil-war-veteran.html
Read more:
http://collectingforthefuture.winterthur.org/portfolio/3807/
https://www.findagrave.com/memorial/10217370/sarah-s-blackburn