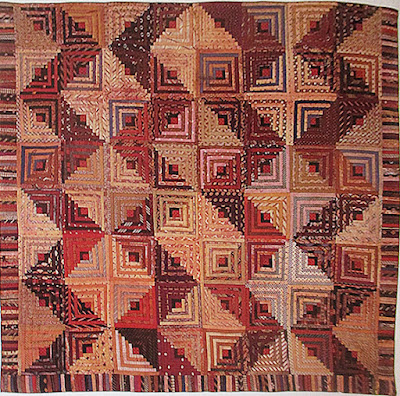 Charlotte Varnum was born in Dracut, Massachusetts early in the 19th century. In 1830 she married John Pierce Cutter of New Hampshire and gave birth to several children on their Dracut farm. Two boys died before the age of three but George, Alfred, Charlotte, Martha, John and Sarah survived into adulthood.

When youngest daughter Sarah was born in 1845 John was listed as a Yeoman, a small farmer. A few years later he joined the Forty-Niners in California and died there in January of 1850 (possibly in a cholera epidemic that year.) 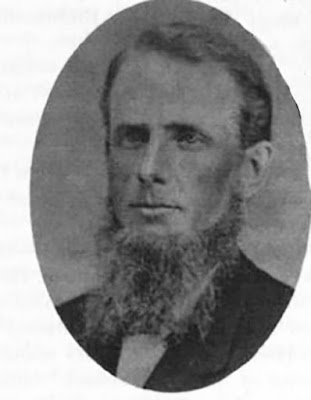 Son George went west in the 1850s himself, spending time in Oak Grove, Wisconsin but as his obituary tells us: "Loving liberty...abhorring wrong...the Kansas Nebraska bill and the subsequent...slavery crusade in Kansas set him all ablaze."

He arrived in eastern Kansas in March, 1856 ready to fight for a free Kansas state. He also hoped to establish "a home for a widowed mother and his young brothers and sisters." He later recalled:

"I came on my own hook, by the river route. I took a Claim as soon as I got into the Territory on Coal Creek about ten miles from Lawrence. I went to work immediately and made the following improvements, to wit – built a Cabin – broke 6 acres." 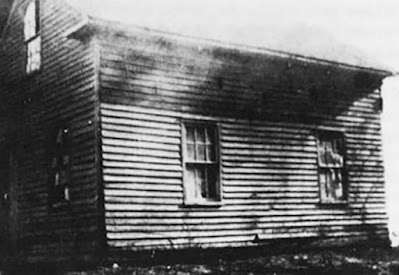 George claimed land near Coal Creek
building this two-story frame house begun in the mid 1850s on
a hill east of what is now Vinland.
Photo from Kansas History
George succeeded in his goals, fighting in small battles in the Kansas Troubles, riding to Osawatomie with James Lane and John Brown family members in 1856 where he was shot several times, lucky to survive with just a limp for the rest of his life.
Charlotte and the younger children joined him in 1859 and by the 1860 census she was listed as a 56-year-old farmer with her five children.

The two older boys George and Alfred enlisted in the 9th Kansas Volunteer Infantry formed in March, 1862 along with several neighbors including Seth Kelly. 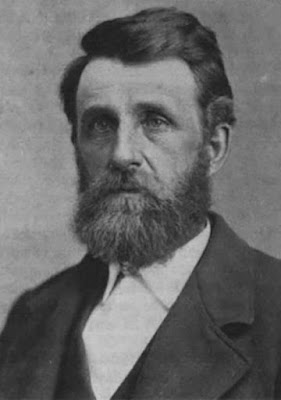 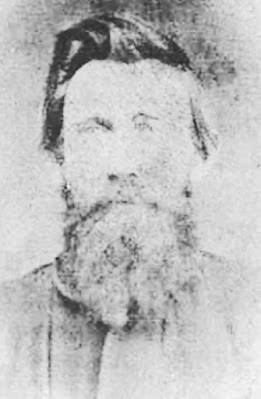 Corporal Seth Kelly (1836 -1868)
The 9th Kansas served in Missouri, Colorado, Montana and Arkansas over three or four years. Seth's diary for 1864 has survived in the family and great-granddaughter Anne E. Kelly Hemphill published the journal in Kansas History, Autumn, 1978. 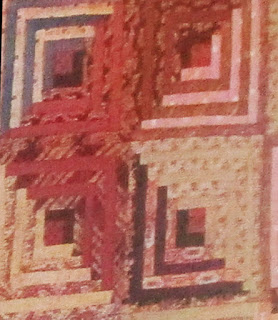 The log cabin quilt, probably made after 1870, is pieced of
wool and combination wool/cotton fabrics, scraps from the fashionable
clothing of the 1850-1880 era.
Seth and possibly the Cutter boys spent winter 1863-4 not far from home, reinforcing Douglas County after the disastrous raid by Confederate Missourians a few months earlier under William Quantrill. 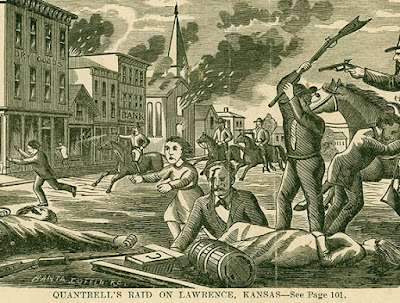 A crude and fanciful depiction of Quantrill's Raid by
an artist who'd apparently never seen Lawrence, Kansas.
Nearly 200 men & boys were killed.
Seth's diary begins with his account of spending New Year's Eve, 1863 at Mrs. Cutter's and then a cold month in camp. On February 22, 1864 he was back at Mrs. Cutter's "at sundown. There I always find a welcome and kindness for which I fear I cannot be able to show sufficient gratitude."
Army life was slow that winter, drilling and waiting for Confederate threats. Seth spent free time reading---Wilkie Collins's novels and Bayard Taylor's travel book. Those New England transplants took pride in their literacy and Charlotte Cutter's home was the site of a lending library run by the young people, still in business in the neighborhood. 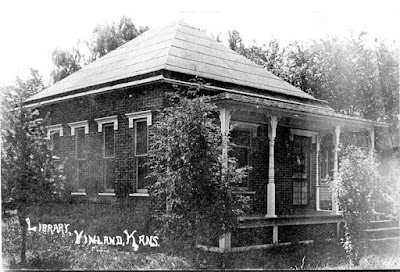 In 1900 the library moved out of the Cutter house into its own building.
In spring the regiment went to Arkansas by way of Missouri seeing little action but some "beautiful little rebels" near Clarksville, Arkansas. In November they were home again. He and Alf Cutter "arrived about 8 o'clock at Mrs. Cutter's." He mentioned staying at Charlotte's home several times in December. "Saw several of the friends." That little house must have been packed to the roof with young people. We get a glimpse of Charlotte Cutter's role in the war, welcoming the neighborhood soldiers with meals and hospitality. 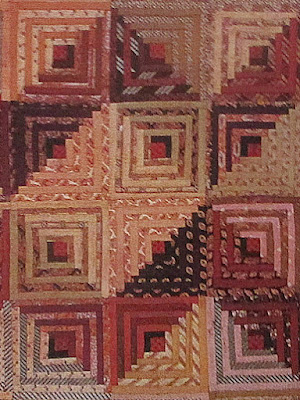 Charlotte's war, while undoubtedly full of worry for her sons, was relatively calm. Her postwar family crises, however, must have caused her a good deal of grief. Daughter Martha married Seth Kelly in 1866. 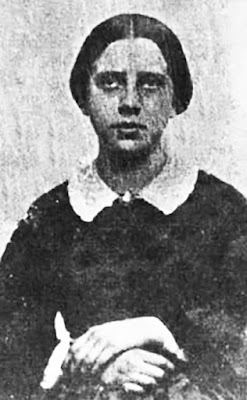 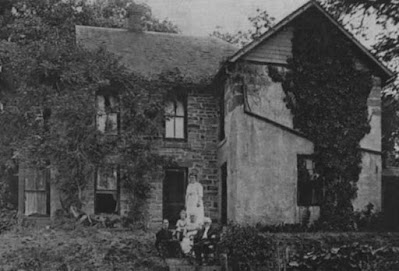 Seth began this stone house in 1866 but died of cancer soon after, leaving
Martha with a year-old baby George, named perhaps for his Uncle George.
The photo of  the seated women with Martha's sister Sarah and her
is from about 1911. 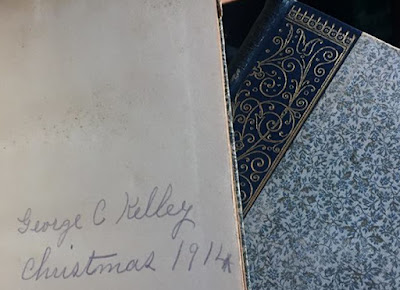 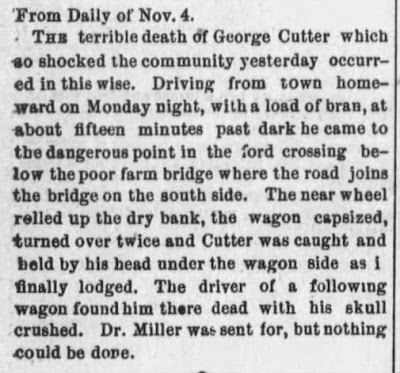 Charlotte's son George, who seems to have been a very popular man, died in an accident fording a stream (Coal Creek or the larger Wakarusa River?) in  November, 1874. The wagon overturned, he struck his head. People were still talking about it a hundred years later when I first spent time in Vinland. 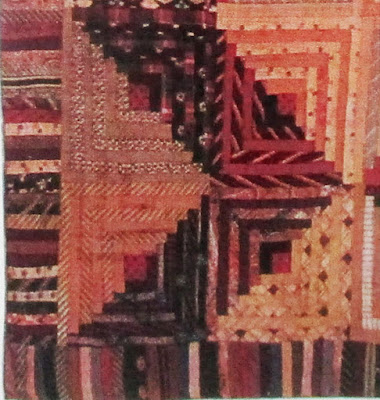 The log cabin quilt has layers of pattern, alternating
darks and lights in complex fashion. 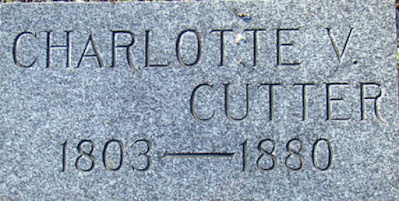 Charlotte died in her late 70s leaving many descendants in the
neighborhood. 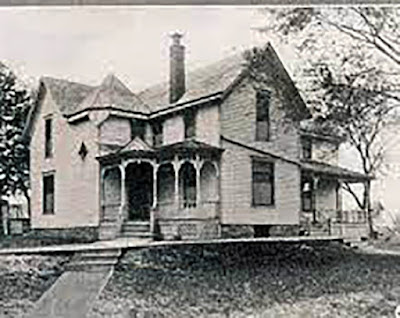 The house on the Cutter's land today was begun in 1913.
Read a PDF of Seth Kelly's diary in Kansas History in 1978:
https://www.kshs.org/publicat/history/1978autumn_hemphill.pdf
Posted by Barbara Brackman at 6:00 AM