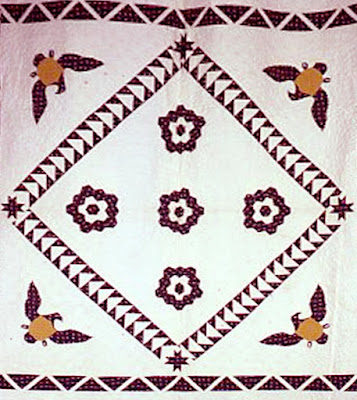 Detail of a quilt from Spartanburg County, South Carolina 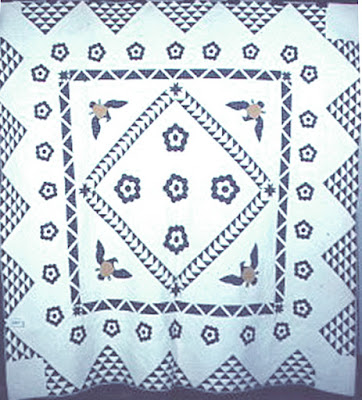 Means family quilt
The work sheet for the South Carolina Quilt History project describes it as blue and yellow so I
have color corrected their picture to blue, although it's too blue here.
In the last post we looked at this quilt recorded in the South Carolina Quilt History Project and the woman thought to have made it.
The Means family member who brought it for documentation (born in 1917) said she'd found it in her great-uncle Samuel Clowney Means's trunk. She guessed it had been stitched by his wife Margaret Ann Moore Means who died in 1879 at 44 years of age. Margaret (called Ann) Means's quiltmaking years would likely have been from about 1855 until 1879. I have my doubts about this being a quilt made after 1850. 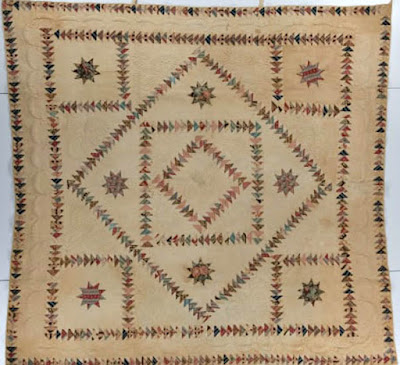 The style, a rather airy medallion format is similar to this one dated 1824,
signed Rebecca Turner. Collection of the International Quilt Museum
https://www.internationalquiltmuseum.org/quilt/19970070342 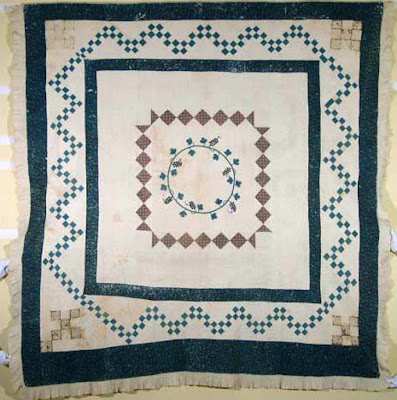 Or this one in the collection of the D.A.R. Museum.
Most of these aren't date-inscribed but the fabrics and styles indicate
a date before 1840. 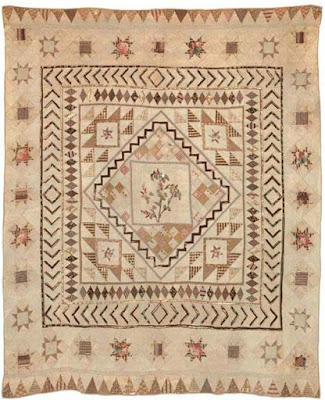 Jane Hutchinson Lithgow Henderson (1780-1842), Virginia
The format of a square on point is often seen in early Virginia and Maryland quilts. Border patterns like the zigzag are common in early medallions.... 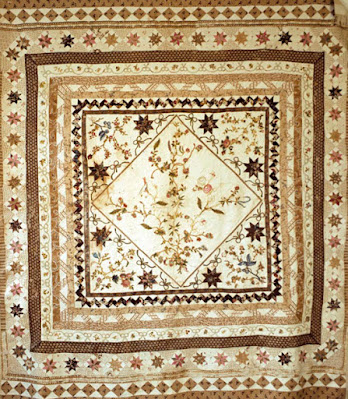 Going back to the earliest like this Virginia example dated 1796. 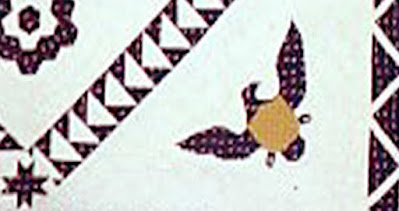 Means family quilt
Hexagons and flying geese, eight pointed stars...
Common design in quilts prior to 1840.
To say nothing of eagles. 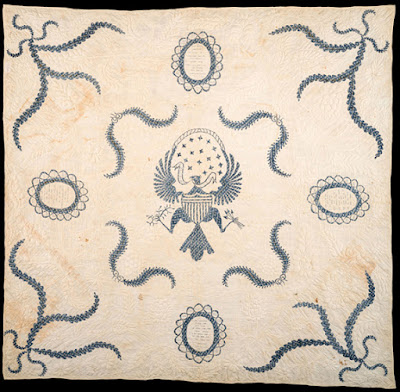 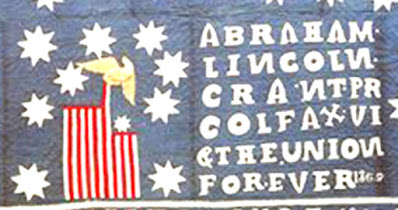 Elizabeth Holmes, 1869
We also discussed the idea of the eagles, more
exclusively a Northern/Union image after 1850 or so. 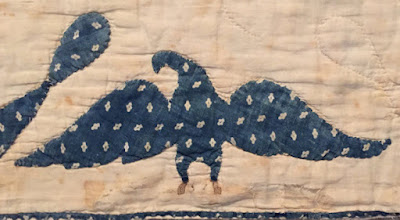 Quilt attributed to Georgia
Southerners might use an eagle after 1850 but not a
family with such strong Confederate sentiments
as the Moore/Means family.
The eagle imagery is just one clue to a date earlier than that lifetime. 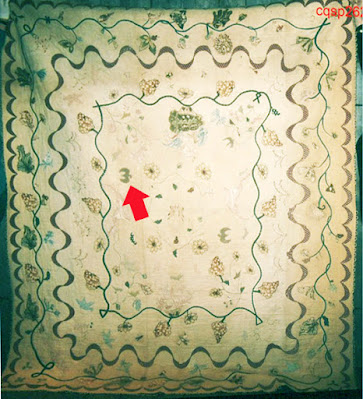 Quilt dated 1810 from the Connecticut quilt project
and the Quilt Index. Two eagles floating in a medallion
center. 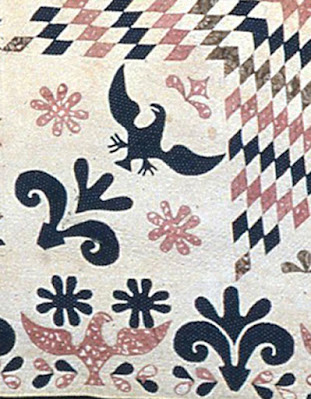 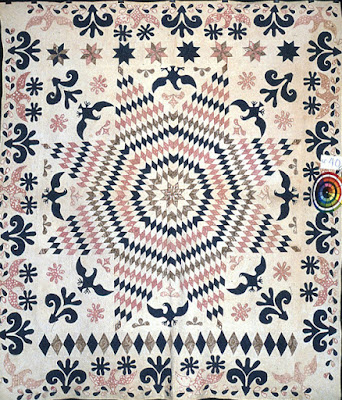 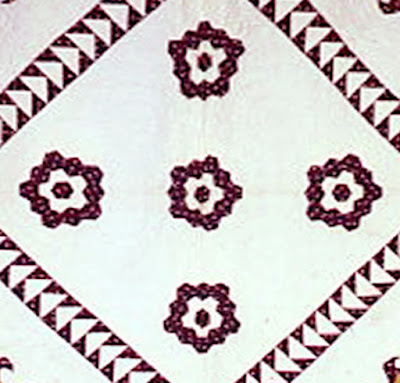 Somehow the hexagons wind up as five-sided shapes.
Another mystery.
All in all I'd date the quilt in question to perhaps 1810-1840.
Who made it then?
We can guess with some evidence that Ann Means did make quilts. A Mrs. M. Means won third prize in the patchwork quilt category at the Spartanburg Fair in 1857. Her great niece told the S.C. project that she made three quilts other than this one and one had "been donated to Historic Columbia Foundation." 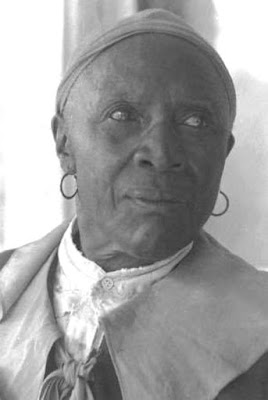 Fannie Moore in 1937
More evidence of Ann's Moore family as quiltmakers is in the memories of one of the enslaved girls at their Spartanburg County plantations. Fannie Moore was 17 years old at emancipation. In a 1937 interview recorded by the W.P.A. she seems to be recalling Ann's home at either Fredonia or Walnut Grove but her memories of the plantation master have caused some confusion. She calls him Jim and remembers when he died (hauling cow manure for the garden) leaving sons Andrew and Thomas in charge. Dr. Andrew Barry Moore, died in 1848 so Fannie, born in 1849, would have had no memory of him. He was a practicing physician and did not manage the farm. Jim was perhaps another relative... Or maybe the children's guardian (and their mother's second husband) Samuel N. Evins who lived until 1868. Or a manager.
Fannie's memories of quiltmaking in slavery were painful and seventy years later she was still angry.

"My Mammy [Rachel Moore ?] she worked in the field all day and pieced and quilted all night....Sometimes I never got to bed. Have to hold the light for her to see by. She had to piece quilts for the white folks too....My brother [held the pine light] so's I can help mammy tack the quilt."

Quilts seem to have been present for several generations of Moores & Meanses, Black and white. Which leads us back to older women. 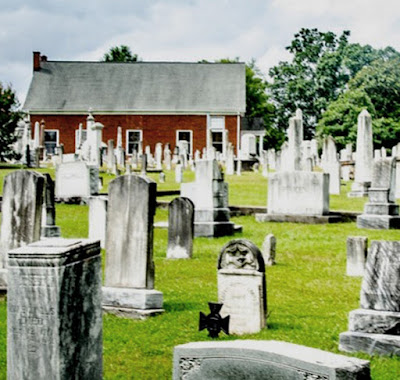 Nazareth Presbyterian Church, built in 1832
The extended family were Scots-Irish Presbyterians, centered around the Nazareth Presbyterian Church, where most of them are buried. South Carolina quilt historian Laurel Horton has studied the quilts of another local family the Snoddys and the Blacks. For more information about the local Scots-Irish heritage see the first chapter in her book Mary Black's Family Quilts at this preview
https://www.google.com/books/edition/Mary_Black_s_Family_Quilts/grvJ676MQhsC?hl=en&gbpv=1
One candidate for quiltmaker in particular is another Margaret Means. Margaret Clowney Means (1793-1873), married to James Kelso Means, was the younger Ann's mother-in-law. Her quiltmaking years would have been about 1810 to 1873, a timespan that suits the quilt style here. She might be the Mrs. M. Means who won a prize at the 1857 fair.
Ann Means's husband Samuel was the eldest of his mother's six boys. Ann's position as wife of the eldest son may have entitled her to become the quilt's caretaker at her mother-in-law's death in 1873 and that is how the quilt wound up in Samuel's trunk.
Other possible makers might be Ann's own mother Nancy Miller Montgomery Moore Evins (1804-1862), of the right age in the 1820-40s before the eagle became a Northern symbol. And then there is Nancy's mother, Margaret Miller Montgomery (1786-1880) who outlived her daughter and granddaughter dying at 94. 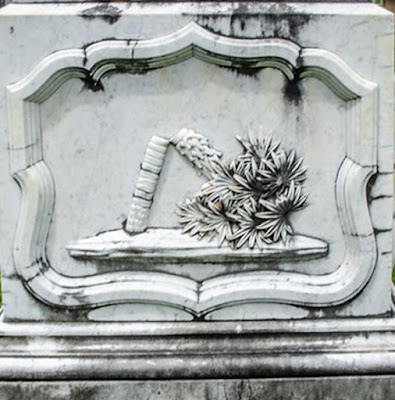 The Nazareth church yard has 1,747 graves. The options are many.
Posted by Barbara Brackman at 6:00 AM