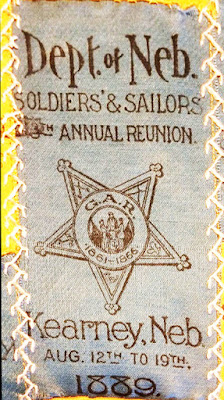 Many quiltmakers towards the end of the 19th century and into the 20th included souvenir ribbons in their fancy quilts.

Civil War veterans attended reunions every summer all over the U.S. for decades.

Union members of the G.A.R. (Grand Army of the Republic) might have had quite a collection. 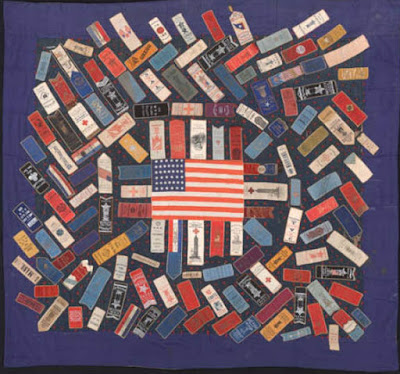 Mary Knight Foote of Long Island, New York deserves to win some
kind of prize for variety and sheer number in her small patriotic piece. 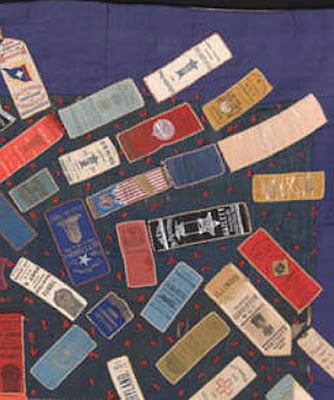 Mary A Foote (1842-1908), is buried in Uniondale, Nassau County, west of Hempstead. Mary and husband John had two girls born during the 1860s; the youngest Ada married William Wrigley of Philadelphia in 1885. The Wrigleys moved to Chicago and made a fortune in chewing gum. 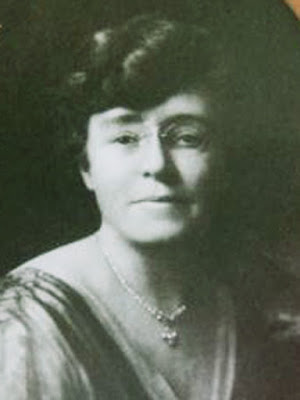 Ada's children donated the quilt in 1959.  Did Mary Foote have a connection to a Civil War veteran? Her husband John Foote (1836-1893) may have been the ribbon collector but no link to the GAR is evident.

Perhaps Mary's collection of GAR ribbons has a connection to her husband's job. The 1870 United States Census lists John as a "Clerk in Naval Contractors Office". The 1880 Census cites he works "in Navy Yard".