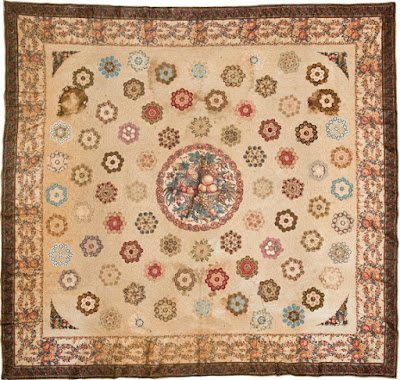 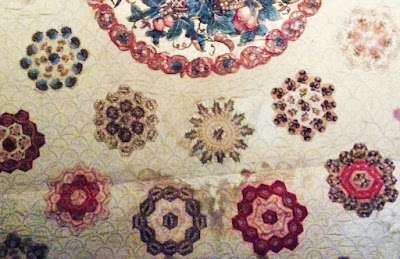 The date is from family history, linked to her November, 1829 wedding.
Style and fabrics back up that date. 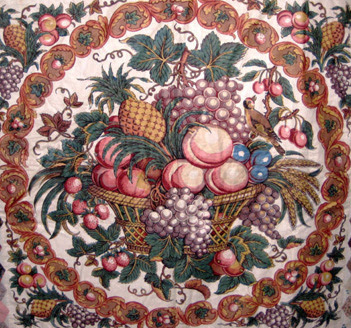 The central panel of a fruit basket is the most common panel seen
in American quilts used from about 1825 to 1850. 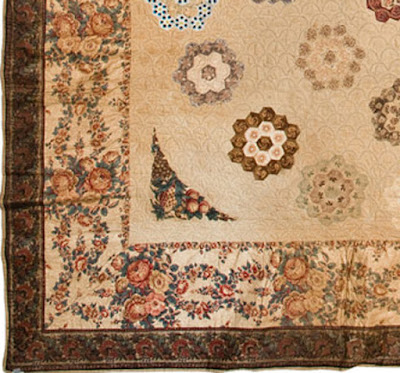 The floral stripe in the border is a double loop with a bouquet seen
in another Charleston quilt dated 1830. 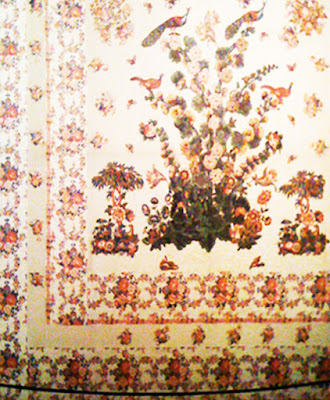 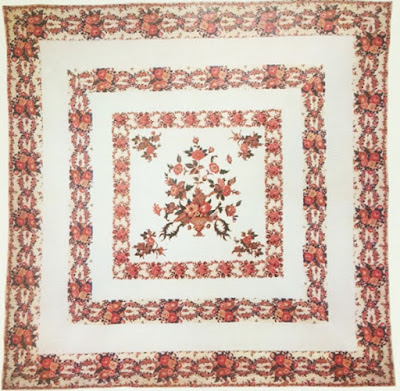 And used in similar fashion in this quilt from Woodard & Greenstein's
inventory, likely from Charleston 1825-1850 based on format and fabrics. 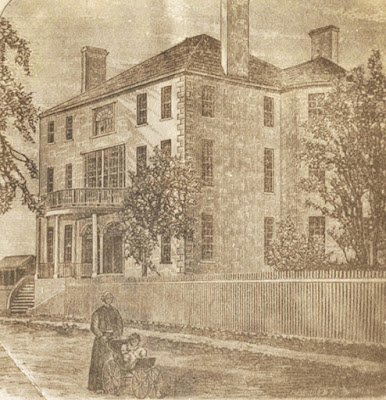 Woodcut of the Barnwell home, "The Castle"
from the Lowcountry Digital Library

Catherine was born in 1809 into the family that built this mansion in Beaufort, South Carolina. She was the daughter of Carolina aristocrat Edward Barnwell. Appropriately, a slave is pictured in front, as the Barnwell fortune was built on slavery, rice and sea island cotton. 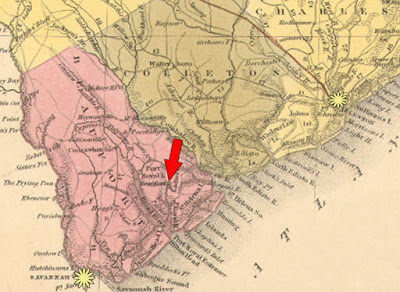 Beaufort is on Port Royal Island, one of the Sea Islands, about
midway between Savannah and Charleston (the yellow symbols). 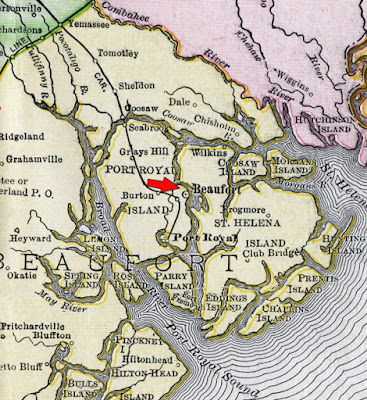 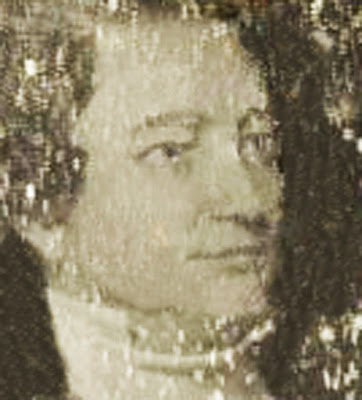 
"During his time at Harvard, Barnwell was punished for various offenses, most often for irreverent behavior, sleeping, or disorderly conduct at public worship. He was also admonished for holding festive entertainments and ordered not to leave Cambridge without permission. After graduation, Barnwell attended the Litchfield Law School in 1826 and was admitted to the bar in 1827 at Charleston....On November 26, 1829, Barnwell married Catherine Osborn Barnwell, a daughter of one of his first cousins. Despite his apparent earlier irreverence at religious meetings in his youth, Barnwell left the practice of law to become an Episcopal Minister." 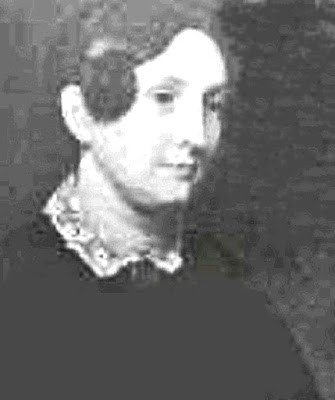 This may be a portrait of Catherine Osborn Barnwell

Catherine gave birth to a dozen children in the 21 years between 1831 and 1852. William soon became rector at Charleston's St. Peter's Episcopal Church, incorporated in 1833. Another cousin, powerful Charlestonian and early secessionist Robert Barnwell (Smith) Rhett, seems to have invited William to establish the new church. 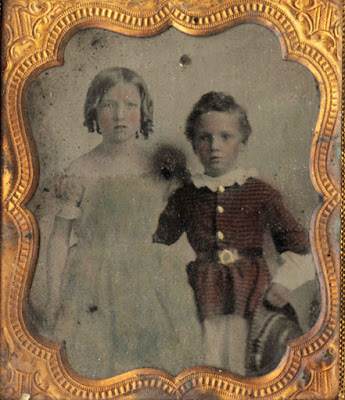 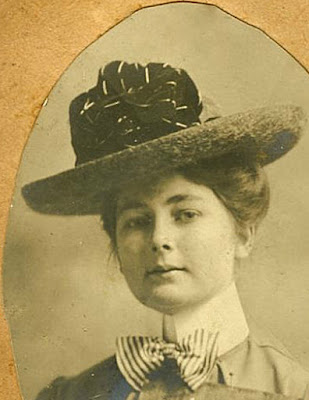 Catherine's quilt descended in her son Allard's family. Granddaughter Nina Graham Barnwell Heywood gave it to the Charleston Museum in 1948. 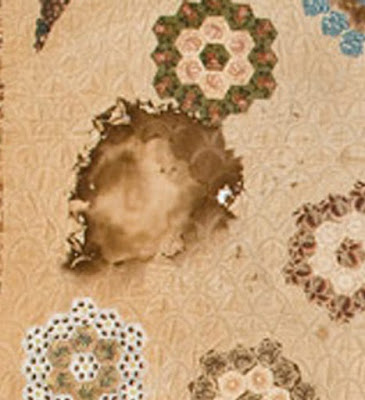 By the time of the gift the quilt was well worn with two burn holes and water stains. The detail shows the scallop/clamshell quilting pattern. The museum caption tells us the scallops are corded (outlined in corded lines) and there is no batting. The cording work is attributed to enslaved seamstresses. 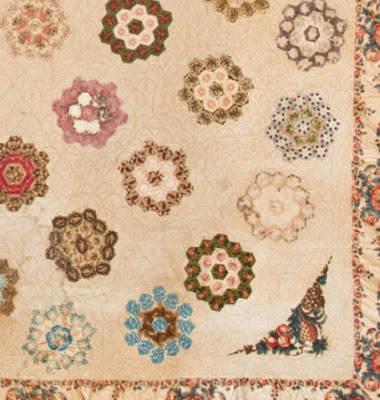 Southern quiltmakers typically used every scrap of the fruit panel.
Triangles in the corners are leftovers from trimming the center image.

Over the past year or so Merikay Waldvogel and I have been looking closely at quilts like Catherine's featuring panels. Our conclusion is that many of the Charleston-area examples were made by professional seamstresses working to a formula efficiently using chintz florals, stripes and panels, stitching bedcovers as luxury items for Carolina's wealthy elite. 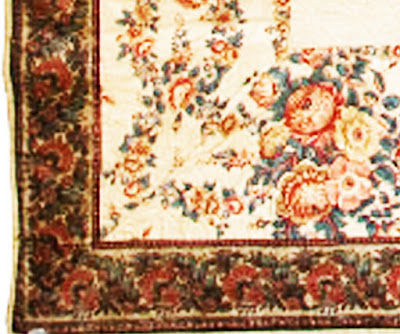 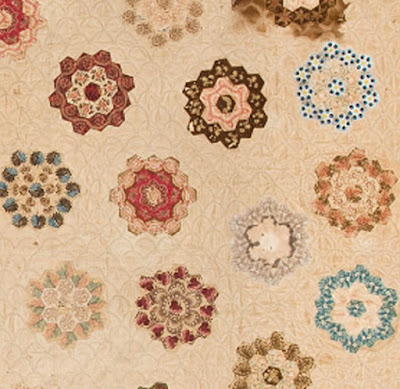 But Catherine's quilt is different. It's so labor intensive with its rings of concentric hexagons (over 75). No one could make money doing this kind of work. Catherine may have had help from friends and hired or slave seamstresses but the carefully cut, repetitive hexagons indicate the close supervision if not the handwork of one woman with a lot of leisure time (before the 12 children.) She may have made the top herself and then turned it over to enslaved quilters.

Next week we follow Catherine and her children into the Civil War.
Posted by Barbara Brackman at 6:00 AM

It is so fascinating that you can find so much information about the history of this quilt and the woman who made it (or had it made). I wish I could find out more about my ancestor quilt makers but they were just regular people who had to work for a living and didn't leave much of a paper trail. Thanks for sharing your research.