Buried With the Silver: Unintended Consequences 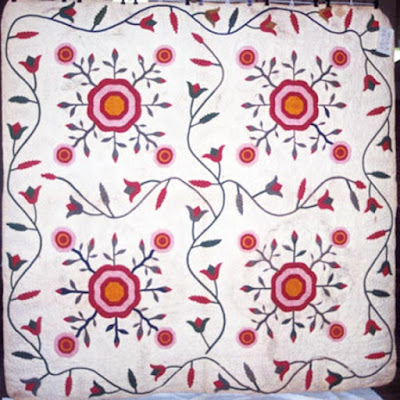 According to the family tale:


"This quilt is a family heirloom made by my grandmothers grandmother who lived in southern Alabama. During the Civil War the family silver and other valuables were wrapped in the quilt, placed in an iron pot and buried in the ground to keep the Yankee troops from plundering."


This week: variations on the central Rose of Sharon applique with family stories that they were saved from Yankee raiders by being buried outside the house.

But: According to the history of the 102nd Illinois Infantry, marching through Springfield, Georgia in December, 1864, removing valuables from the houses had unexpected consequences.

"A company...is guarding the houses of citizens. But alas, for those over prudent citizens! They buried their household goods in grounds adjoining their houses, and the soldiers have discovered them. An almost endless variety of articles have been exhumed. Some are bringing away clothing, other blankets, other fine dishes, silver spoons, etc. " 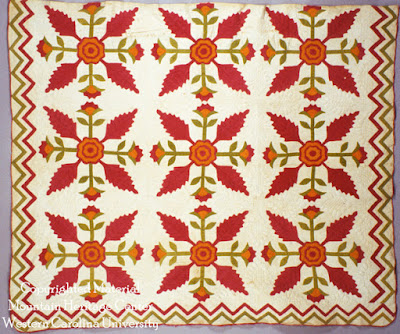 Quilt from the McClure family. Collection of the Mountain Heritage Center.

"The quilt supposedly was buried during the Civil War to keep it safe from Federal troops, probably stationed in east Tennessee. Another version has it that the family silver was wrapped in the quilt and buried to protect it from theft by the troops." 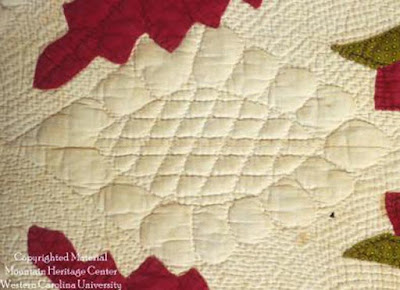 Stuffed quilting in the McClure quilt. 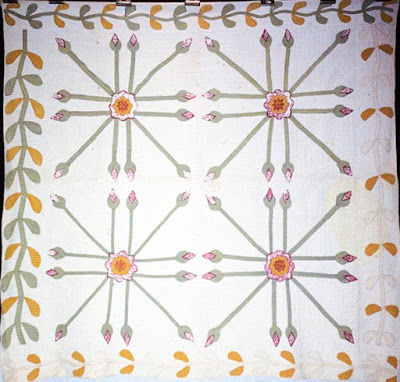 "Quilt made by the mother of Walter Jackson Vickers (born in 1889) Sweetland, WV. It was buried underground, along with silver, during the Civil War, so it would not be confiscated by soldiers." 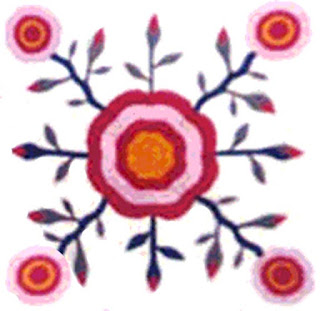 I always wonder what watertight and animal and insect proof container protected these buried quilts from water seepage, rot due to dampness, rodents and other damage. They couldn't just wrap the silver in a quilt and dig a hole, toss in the quilt and shovel dirt on it. Maybe the quilt and silver could have been buried in a large lidded pot or a wooden or metal chest for a short period of time, while the soldiers were present for example. They did not have sealable plastic bags.

Yes, Suzanne A, that's what I was thinking too.
A wooden chest or a large pot?
And It couldn't have been for long because of what you said,
water seepage and rot from dampness, etc.
Difficult decisions and times.