Quilts Buried With the Silver-Or Should Have Been 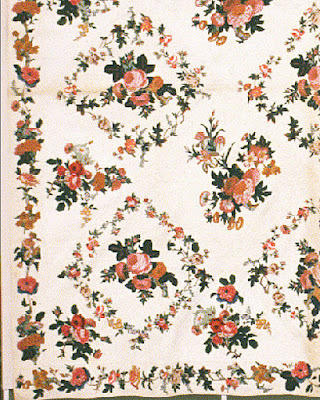 This chintz quilt's journey tells us a little about Virginia's Civil War. It's pictured in a website about the culture in the Upper Shenandoah Valley, exhibited at the Woodrow Wilson Birthplace and Museum in 1995.
http://valley.lib.virginia.edu/VoS/quilts/quilt.html 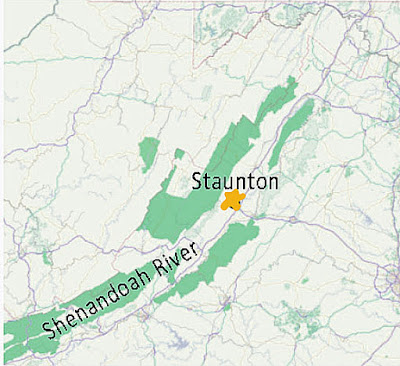 The quilt was loaned by the family who also kept the tale that it had been "stolen by federal soldiers during the Civil War, given to a black family, and purchased back by Jane's daughter."

I color corrected their pink photo by shifting it greener.
I think this would be more accurate.

Jane McCullough Mosby was born in Baltimore but spent most of her life in Staunton, (pronounced Stanton) Virginia in the Shenandoah Valley, Augusta County. Jenny McCullough married Armistead Mosby on March 29, 1809 or 1810 (depending on the source) when she was about 25 years old. 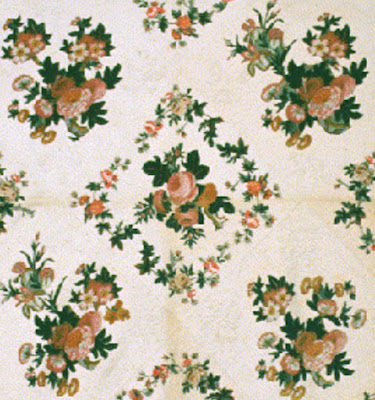 The block chintz quilt is a distinctive style, typical of the twenty years before the Civil War. If  made in 1850 Jenny Mosby would have been 65 years old when she stitched the quilt.

Staunton right before the war

Armistead M. Mosby (1787- 1861) is described as one of three merchants in Staunton who
"supplied, not only the home demand, but a portion of eastern Virginia, with saddlery, leather and tinware, making frequent trips to the south of James river, in wagons, to sell or barter the products of their shops." Jenny and Armistead had one daughter Sarah Elizabeth born in 1812. 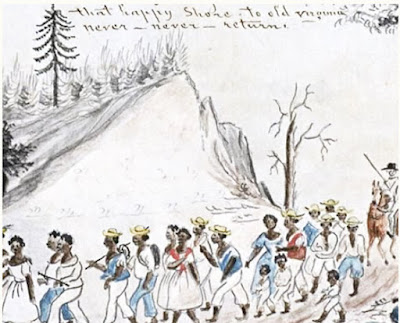 Lewis Miller's sketchbook of Virginia scenes includes
this one of Staunton slaves who've been sold
walking to Tennessee.

Merchants like Armistead in early 19th-century Virginia were slaveholders. Records from 1827 list six people---Albert, Anthony, Dick, Frank, Lucy and Maria---in indentures. (Perhaps Lucy and Maria worked on the quilt.) I actually wouldn't be surprised to find it to be Sarah's quilt rather than her mother's. And lately I have been looking at quilts with Broderie Perse blocks and wondering how many of them were purchased from professional quiltmakers.

See a post on Virginia quiltmakers who made quilts similar to this one:
http://womensworkquilts.blogspot.com/2018/04/the-boyle-sisters-professional.html 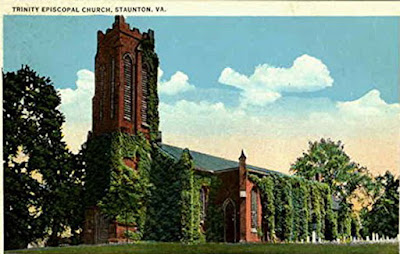 The Mosbys were members of the Trinity Episcopal Church in Staunton. This building erected in 1855 and enlarged in 1870 would have been familiar to the family. The Episcopal/Presbyterian congregation established the Virginia Female Institute in 1844 with Armistead on the board. Daughter Sarah may have been a teacher of drawing and painting there.

Sarah married Alexander Taylor, described in her obituary as a "prominent merchant of Staunton in his day. She leaves two children, Alexander Taylor of Gainesville, Fla., and Mrs. Margaret S. Weller of this city." 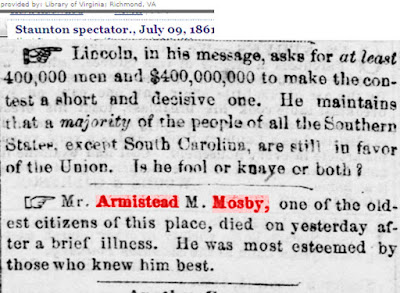 Jenny's husband died in his eighties
just as the Civil War began.

Staunton, the valley's major city, was primarily in Confederate hands during the war and in the midst of many Virginia battles. Sarah Mosby Taylor was recalled in her obituary as a "ministering angel" to Confederate soldiers in those years. Union troops occupied the town for a week in June,1864, setting fires and confiscating food and valuables, events repeated four months later and in the last weeks of the war in 1865.

Postwar history tells us of "widespread hunger and a severe shortage of hard currency." We can imagine the widowed Jenny, near 80, suffering the indignity of losing her quilt to Federal soldiers. During the battles a confiscated quilt might wind up warming a soldier in camp but the quilt may have been taken during Reconstruction days and given to one of the freedpeople, perhaps a Staunton resident or one of the new migrants who arrived looking for work in the city. Somehow daughter Sarah managed to find enough cash or barter to trade for the quilt's return. 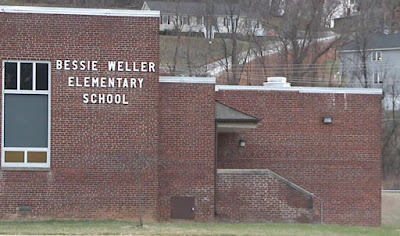 Another of Jenny Mosby's legacies is the Bessie Weller school
in Staunton, named for her great-granddaughter, a school nurse.

Edward L. Ayers has studied Augusta County and the Civil War, comparing it to adjacent Franklin County, Pennsylvania. In the Presence of Mine Enemies: War in the Heart of America, 1859-1863 expands our view of the culture in those years with particular attention to the lives of the African-Americans living there. 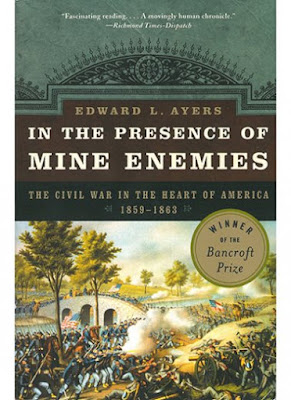 See a preview here of the prize-winning social history:
https://books.google.com/books?id=9lVTBAAAQBAJ&printsec=frontcover&source=gbs_ge_summary_r&cad=0#v=onepage&q&f=false

The Lewis Miller sketch is from his Sketchbook of Virginia Landscapes in the Abby Aldrich Rockefeller Museum of Folk Art---more insight into the area.
https://www.encyclopediavirginia.org/Lewis_Miller_s_Virginia_Slavery_Drawings
Posted by Barbara Brackman at 6:00 AM

Staunton, Virginia, is a lovely town. We enjoyed visiting a glassblowing shop, pottery studio and watching a Shakespearean play at Blackfriars Playhouse. The city's largest park, Gypsy Hill Park is actively used by its residents for cookouts, jogging and bicycling around Constitution Drive, and listening to music in the summer at their old=fashioned bandstand.

Beautiful quilt. I wonder if this Mosby family is related to Col. John Mosby of Mosby's Raiders fame?
The website link for other Shenandoah Valley quilts has more beauties as well. Thanks for the book link too. Much to be thankful for this Memorial Day weekend.