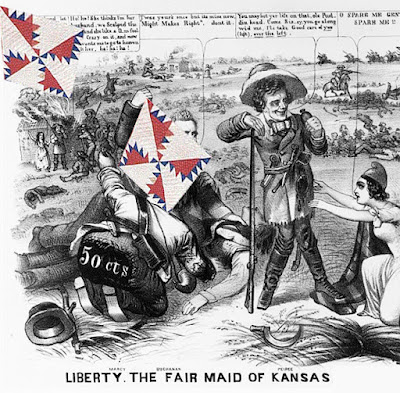 In the years before the Civil War a border war was fought in Kansas where free-state and slave-state emigrants came to vote on the territory's future status. Things got ugly as you can see by this testimony before a Congressional committee. 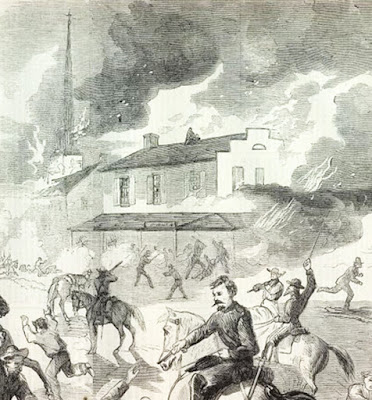 Elizabeth Thomas described an 1856 raid by Border Ruffians (primarily Missourians) who raided the homes of antislavery settlers, hoping to terrorize them into returning to the east. Mrs. Benjamin S. Hancock was one of the victims. They carried off her flour ("flour was very dear at that time,") her pots and kettles and a ham. She wailed to no avail.


John "Randolph, who commanded them, came up and ordered him to...pay no attention to the cries of those abolition women---that they would cry for everything. I know that there was a lot of quilt-blocks; they were blown and scattered over the prairie, having been nearly torn to pieces." 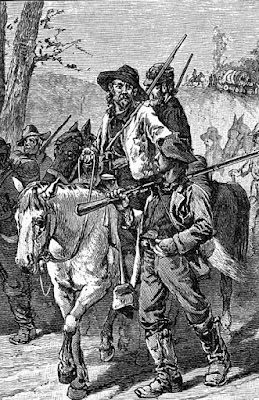 Now, that is mean.

Years ago I read a book by Jane Smiley called " The All True Travels and Adventures of Liddie Newton" It was a facinating fictional story of the part of this time in Kansas /Missouri history that you are refering to. Liddie was kind of a "tom boy" so I doubt she was into quilt making but it does capture the flavor of that crazy time.

I'm reminded by your post of my dad who would shake his head sadly and say, 'Man's inhumanity to man' when he heard of
any mistreatment of people by other people. It's a tendency we have to deny respect to people we disagree
with. Even though it's been years since that event, my heart goes out to her.