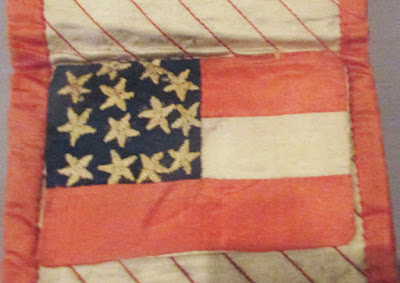 The first Confederate flag indicates this small sewing kit
or "housewife" was stitched early in the Civil War. 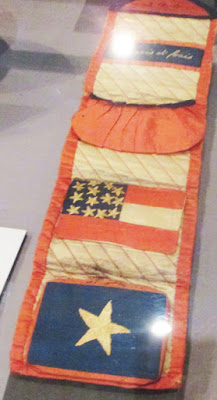 The roll-up is in the collection of the Fort Morgan Historical Site
at the mouth of Mobile Bay in Alabama. It was made
for Lieutenant Colonel James T. Gee, of Selma, Alabama. 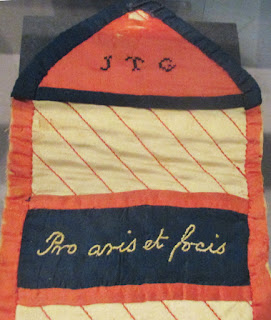 At the top Dr. Gee's initials.

"Pro aris et focis" embroidered below is Latin: "For altars and hearths" 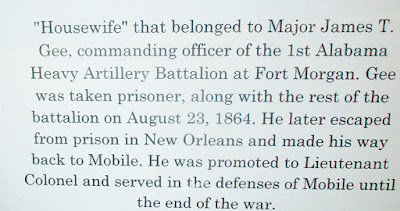 Gee was distantly related to the Gee family for whom Gee's Bend, Alabama was named. He and his mother Susan Binford Gee ran the St. James Hotel in Selma before the war. I couldn't find any mention of wife or children so Susan B. Gee may have made the gift.


"James T Gee of Selma Alabama married Mary Lacy on 27 Oct 1863, during the War obviously. They had a number of children and he died in 1891 at about age 70. So wife, and before October 27, 1863, probably girlfriend Mary Lacy could have made the housewife, just as likely as James Gee's mother."

It seems to have pockets for thread and some of the sections may have been pincushions or needlecases. 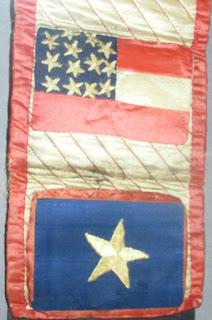 The white silk foundation, quilted in diagonals by machine may have been a coat lining re-purposed as a sewing kit. We couldn't see the other side in the display case. With this patriotic roll-up Gee would be able to patch any holes and replace lost buttons---very small problems in a very big war.

That is a wonderful piece and story behind it.

That's the most elaborate "housewife" I've ever seen. Great story with it.

This man was my great grand father