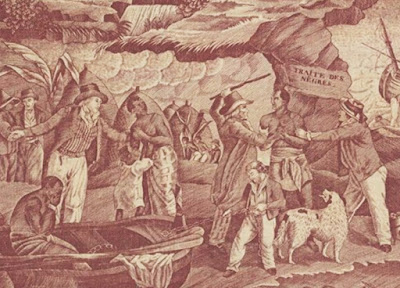 This roller-printed toile with scenes of the slave trade is rather rare. You can tell it is roller printed due to the shorter repeat of about 15-18" rather than the full meter or yard repeat you'd see in a copperplate print. 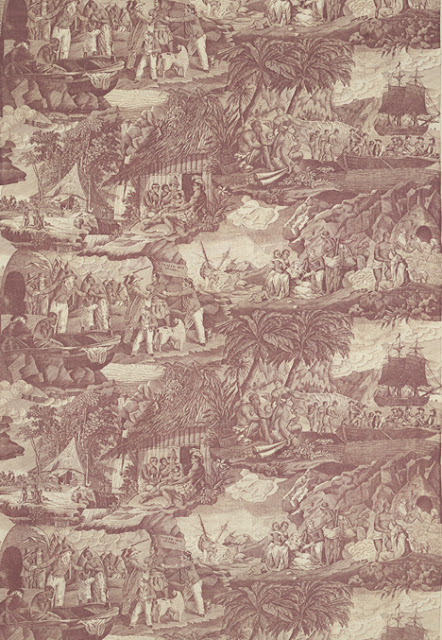 The Met's online catalog shows it the best I have seen it pictured.
The colorway might be described as plum or purple.


From the catalog at the Metropolitan Museum of Art


"Frederic Feldtrappe produced this textile in the early nineteenth century during a moment of intense debate in France over the viability and morality of the slave trade. Of the four narrative scenes, two reference earlier paintings by English artist George Moreland and contrast the brutality of European slave traders with the kindness of Africans who minister to a shipwrecked European family. The other two scenes, based on engravings by Frenchman Nicolas Colibert, juxtapose a happy African family with the appearance of European traders in Africa. Their cache of trade goods (including textiles) ominously foreshadows the horrors of the traffic in human beings."

Bed with brown hangings in the pattern.
at the History Museum in Nantes, France

And more about it in French
http://www.musees-haute-normandie.fr/IMG/pdf/traite_esclaves.pdf 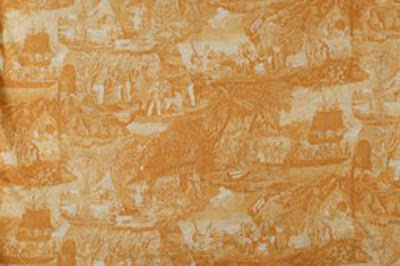 Here's a blurry example in a gold.

Wow. It would be unbearable to have that reminder on your bed everyday. I wonder how well it sold.

I guess if you were a slave owner this would be right up you ally.
But I admit my first thought was why would you even make fabric with this print, let along make something in this fabric.
However it is very interesting historically no matter how repulsive the subject.

It wasn't for slave owners, it was for abolitionists who hated slavery. They felt that everyone should be reminded all the time of slavery's injustice. They manufactured sugar bowls and dishes with the injustices of slavery pictured on them. This toile was a consciousness raiser for abolition. I imagine many coverlets were made and sold at Anti-Slavery fairs to raise money. I should have said that in the post.

I only looked for slave toile because an Asian told me Oriental Toile was offensive. I said Why? They said it's like pictures of slaves in fabric. I thought the Oriental toile was symbolic of daily life... Who were the Asians indentured to? The negro slave had no choice but to work for the slave master. If an Asian carried two baskets on a sktick over his shoulders it was ingenuity to get things moving. A slave with the bushel baskets wasn't working for himself.