Descendants of Caroline Boston
sent me pictures of this autograph quilt.

It's covered with names of veterans and their Civil War units but no date. 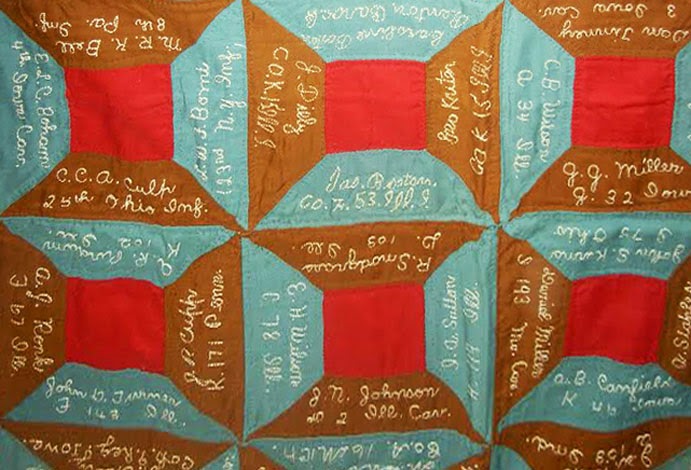 In the center square is their great-great grandmother's name... 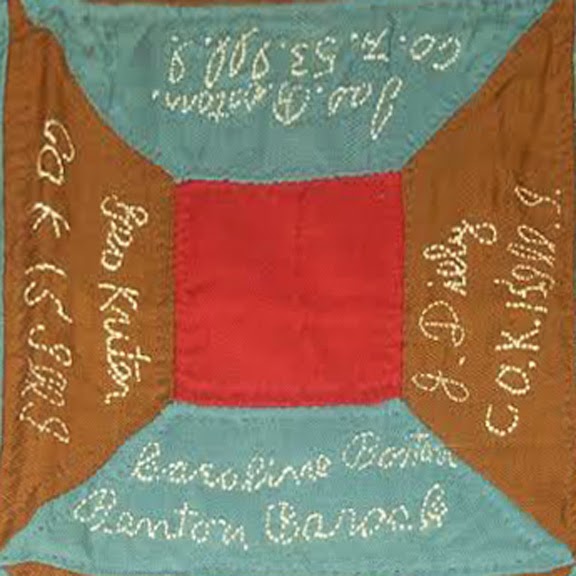 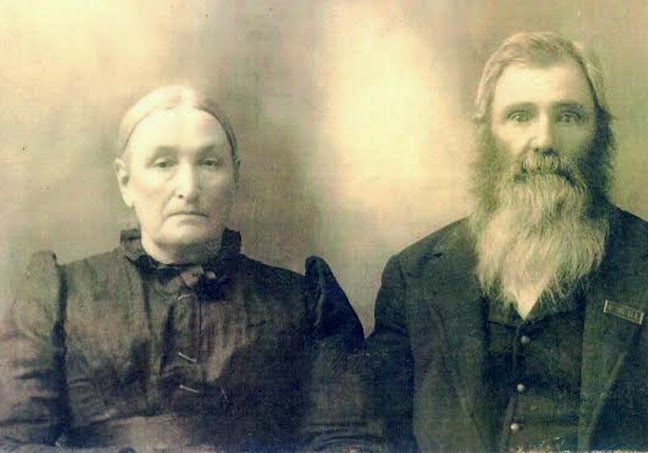 Caroline Gerlach Boston and James Boston, perhaps in the 1890s

Caroline's husband's name is opposite hers in the center block. The fabric is all solids--whether cotton or wool or a combination of fibers we haven't determined, although they think it may be all cotton.

The family has some clues to the meaning of this quilt. They are well aware that Caroline served as a Civil War nurse at St. Louis's Benton Barracks Hospital. 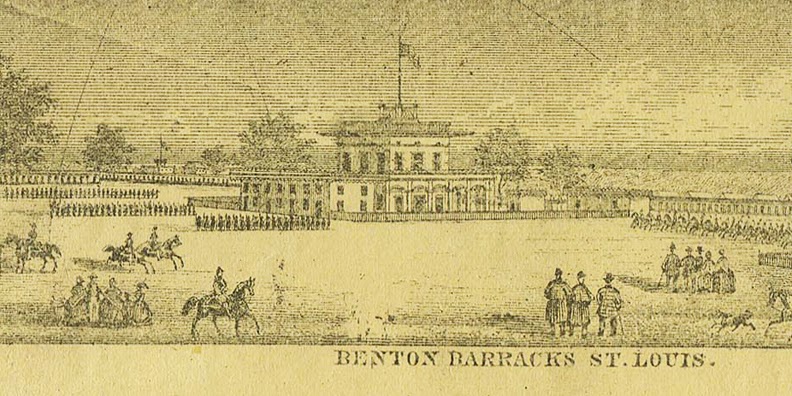 The Benton Barracks Hospital was the largest hospital in the west. 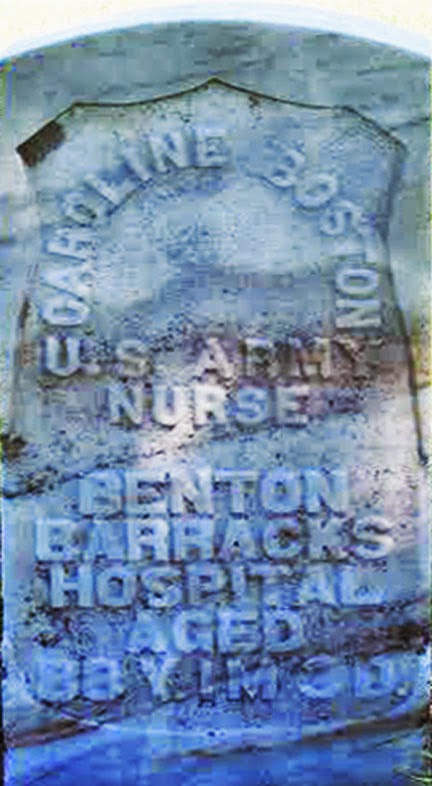 Her nursing service was important enough that she is remembered as a U.S. Army Nurse on
her tombstone, erected after her death in 1922.

Could the quilt have been made during the Civil War and signed by patients at the hospital?

My estimate based on the style, the quilt pattern, the embroidery etc. is: No, it's not a mid-19th-century quilt but a late-19th or early-20th century quilt.

The claret-colored back is very much like the type you see on
crazy quilts after 1885 or so. Perhaps a polished cotton in a new
synthetic red shade.

The linear embroidery is a good clue to after 1880. If it were 1860
there would be cross-stitching or inking for the names. 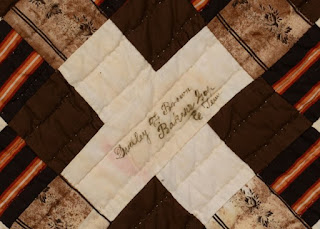 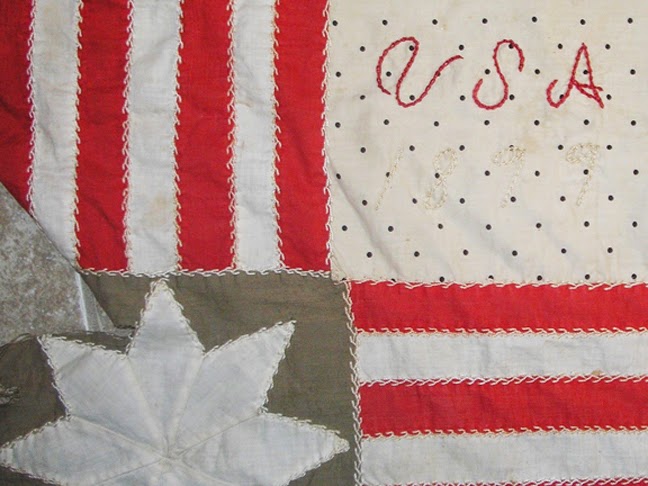 Quilt dated 1899 with linear embroidery.
The thread in the date has faded to white.

Embroidered lettering that traces handwriting is a post-1880 style. 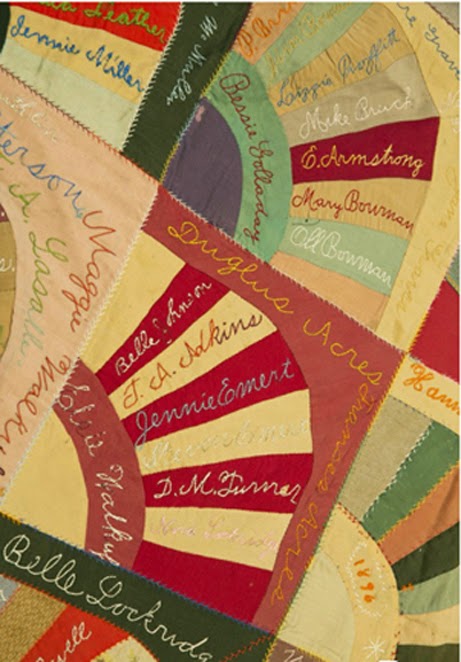 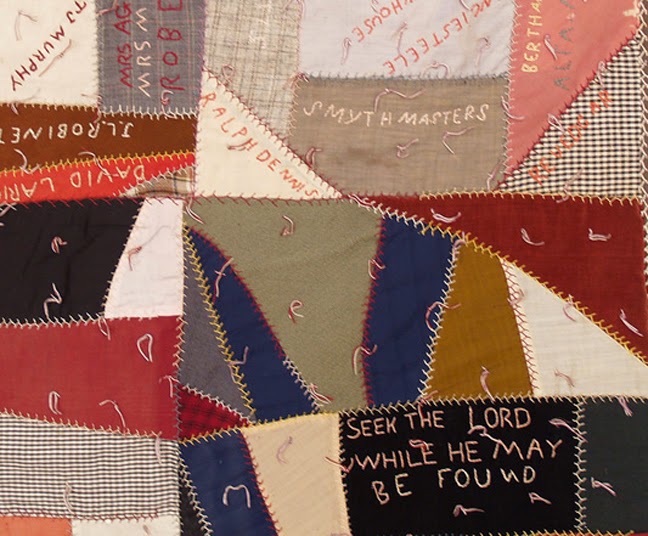 Quilt made of wools and cottons dated 1912

My first guess was that it was made and presented to Caroline and James Boston close to 1900,
perhaps at a hospital reunion. The men's units come from a variety of places so it's not just an Illinois reunion or a Missouri reunion.

The family history corrects me. Caroline made it to recall her patients and her service. Her great-great grandson writes:

"Caroline Boston served as a nurse in Ward E at Benton Barracks. We are currently researching some of the names on the quilt and, so far, it seems likely that they may have been patients at Benton Barracks. Caroline possibly kept records of her patients in Ward E and later in life made this quilt as a family project. It was passed down from mother to daughter, etc.
The time frame from post 1880 – pre 1920 seems entirely plausible....Her family resided in Smith Center, Kansas, during this time."


More on Caroline Boston and the nurses at the Benton Barracks next week.


See another quilt related to a reunion at this post:
http://civilwarquilts.blogspot.com/2014/08/civil-war-union-veterans-fundraiser.html

Barbara, my great great grandfather Emeric (sometimes Emerick) Chase died in service of the Union Army in that hospital in November 1864. He is buried in the hospital graveyard. Is there anyway I could find out if his name is on that quilt?

I look forward to your post every week. It is not only a learning opportunity about quilting but also about history. This particular post gave me pause because it was so personal. Thank you and that special family for sharing with us. :-)

Is there an existing listing of the soldiers and names on the quilt? Would love to see if my ancestor is on there. He served out of St Louis in the Civil War

Rockester - tell us the name you are looking for and I'll ask the family.

Was so excited to read about this. My son in law is a direct descendant of the Benton this camp is named for....they still have Civil War etc. uniforms in their family museum in TN. Since I am a bit of a mutt, I don't have a large knowledge of my family history and theirs is so very interesting. Thanks for bringing this to our attention.