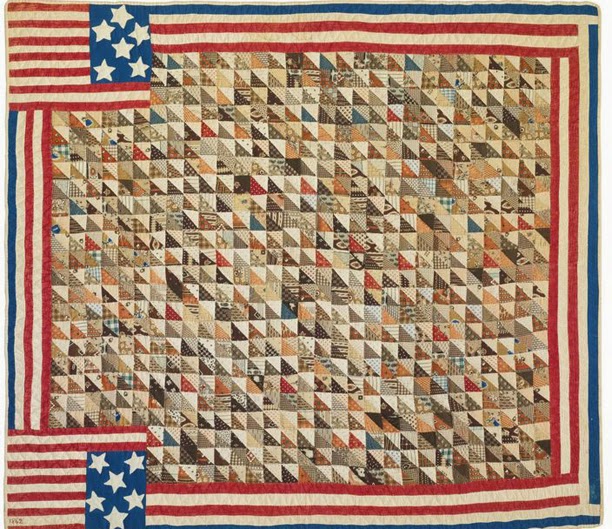 Last week I posted on my skepticism about the date inscribed on this crib quilt. 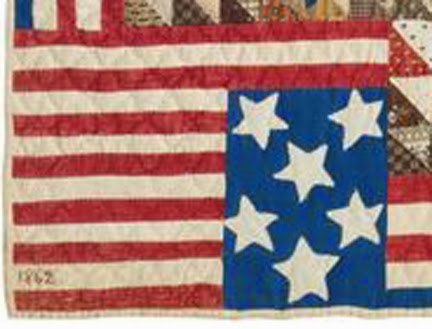 Could it be that a flag dated 1862 was used in a quilt made in the 1870s? Or that the date 1862 commemorated an event that happened a decade before the quilt was made?

Wendy suggested the possibility that the date might have been 1882 with some stitching missing. I doubt that in this case. That 2 is pretty clear above, but I have seen a crazy quilt dated 1693 where someone removed some of the stitching to make it look older.

The flags may indeed have been made in 1862. See a hand-made calico flag attributed to the Civil War years in this post:
http://civilwarquilts.blogspot.com/2015/03/palmyra-mitchells-patchwork-flag.html

The comments last week were helpful. Barbara Schaffer noted that the crib quilt was once part of textile historian Florence Peto's collection:

"Peto had originally purchased this quilt from a local [NJ] dealer and wrote about it in a letter to Elizabeth Richardson on June 12, 1949: '. . . woe is me, I fell for it. Cute. Entire center of tiny one-inch squares, diagonalled - half light, half dark; makes sparkling tile pattern. The border - red and white stripes which form an American Flag at two of the corners. The quiltmaker was able to squeeze in 6 white stars on the blue field - but - ? homespun backing but the date is 1862. The calicoes are same as those of the swatches that came in a carton I purchased recently from The Patchwork House (antiques) in Hightstown, NJ.' "

This week the defense gets an argument too. Or....

Why I may be wrong in being such a skeptic. 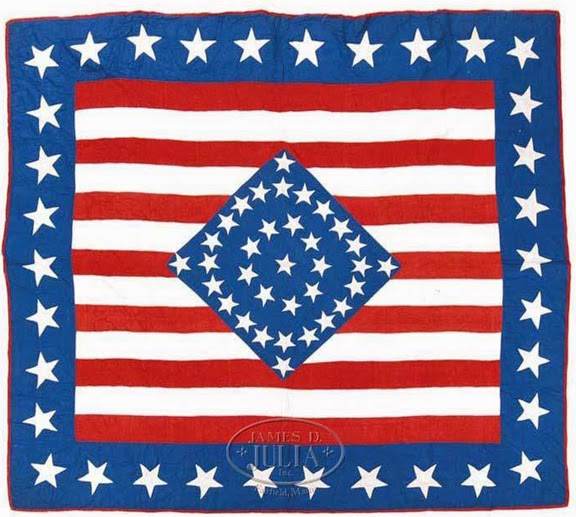 Quilt sold by James Julia auctions
The idea of using solid-color cottons to make a patriotic quilt
was popular during the Civil War. 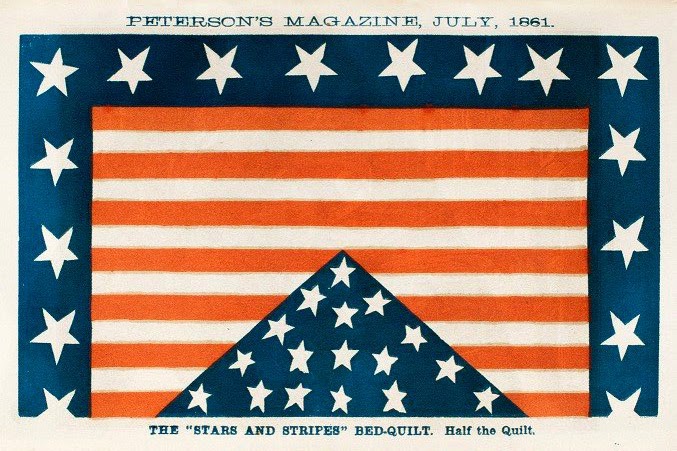 Inspired by this July 1861 pattern in Peterson's Magazine 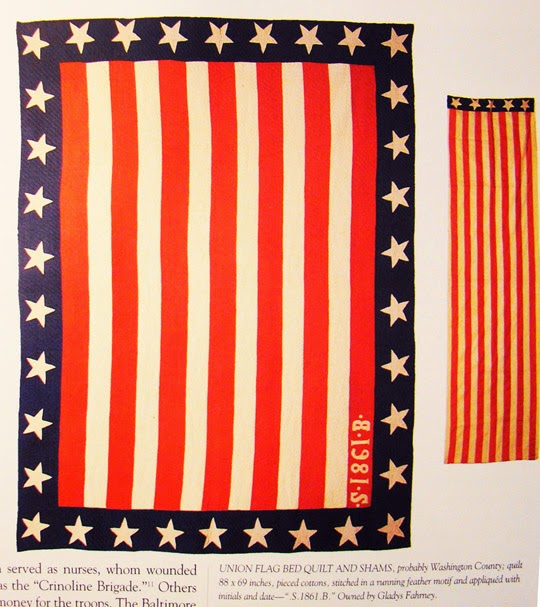 The striped border on the crib quilt dated 1862 is consistent with that style. 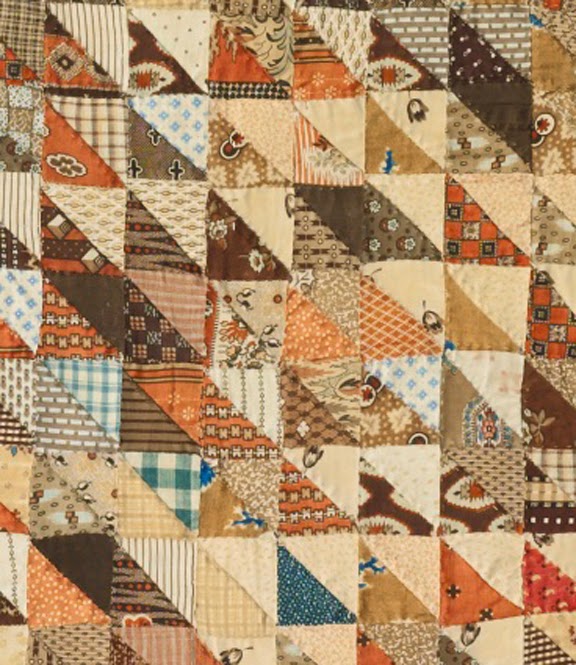 Detail of the triangles in the crib quilt dated 1862.

This may be the strongest argument for an actual 1862 date. I haven't seen the quilt in the cloth but one can see a lot of detail in the online photos. I was looking for particular prints that were quite popular in the 1870s and '80s but not typical of the 1860s. I found only negative evidence. 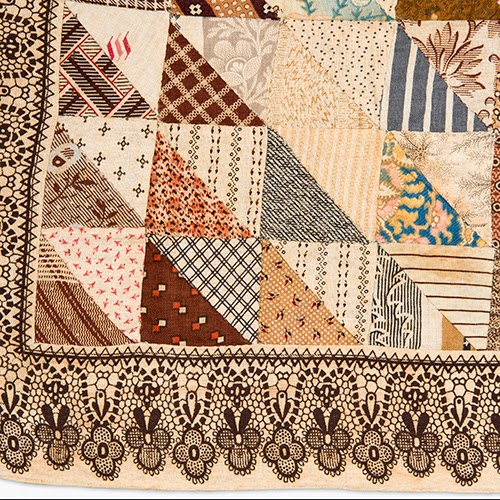 I was looking for date-specific styles like this lace print pictured above. Lace prints were a fad in the 1870s and '80s. But nothing specifically "1870s" jumped out at me in the flag quilt. 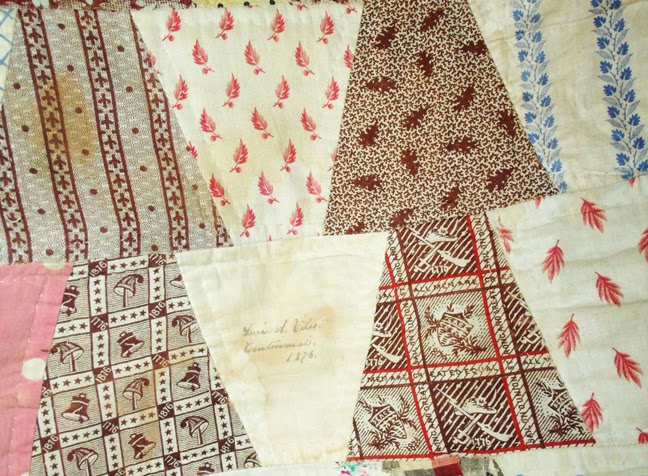 Even better evidence of a later date would have been one of these prints commemorating the nation's 1876 Centennial ( the two darker grid-set patches on either side of the date above.) 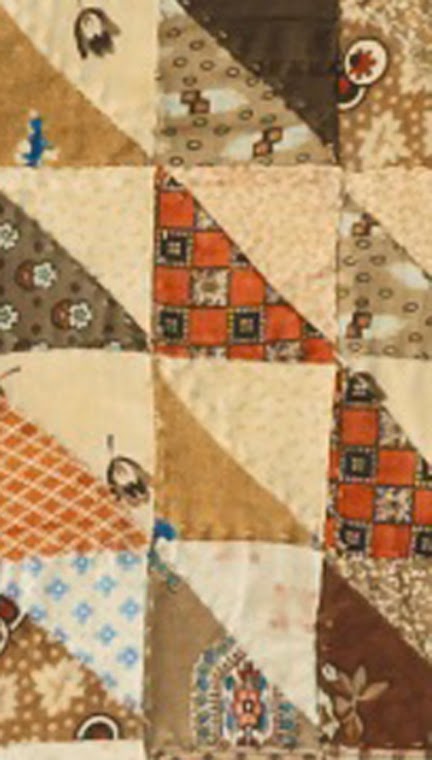 The crib quilt, which has a different brown cast
to it than the quilts made after 1870. It's a subtle clue.

Those triangles could very well be prints from the 1860s, making the case that this crib quilt was not only made during the Civil War, but it is the earliest date-inscribed charm quilt in my files.

It's a hung jury.
Posted by Barbara Brackman at 6:00 AM

Maybe it was started in 1862 by a mother or grandmother, and finished in the 70's by a descendant?

Your comment about the upside down flag is interesting. The aesthetics of achieving visual symmetry on the quilt prevailed over the conventional orientation of the flag. I'm not positive, but I think there's no way you can arrange the flags as mirror images without having one upside down. That's one of the things I like about this quilt.

Good point Suzanne. I may go too far in assigning meaning to the position of the flags.
BB

Thanks for your terrific post, I enjoyed seeing both sides of the argument and it's been a learning experience to see what you look for and how you look at these vintage pieces for the dating clues.

When I first saw your previous post I was struck by the limited range of dye colors, such as madder and Prussian blue, in contrast with your later examples with wider variety and brighter colors typical of the later period. I also collect antique quilts and it bears a striking resemblance to my apparently earlier ones. To me the colors tell the story of an earlier date, with perhaps the border and flags as a later addition.

When I click on the first picture (of the crib quilt) and it;s enlarged, to me, the stripes and flags just scream added at a later date.

Barbara, in what collection does this quilt live?

Ah, the mysteries of quilt dating. I'm voting for the theory that it is the oldest "charm" type quilt known to exist (until proven otherwise, of course). Thanks for continuing the discussion.

Hi Barbara, I have a question related an earlier blog from October 10, 2010. I am trying to match a blue green as featured in the example of the single process synthetic dye blue green used for the background/ back of the large star quilt. I am reproducing a quilt from 1883, & the green has faded to the dun colour you describe. The only example of it I have is left in the binding, & then it also is quite faded, but does seem to have blue in it. I have a sample of willow green, but I think it is too green. The closest I can find online is the kona everglade or emerald, but it is hard to tell . Any suggestions? Many thanks, Fiona