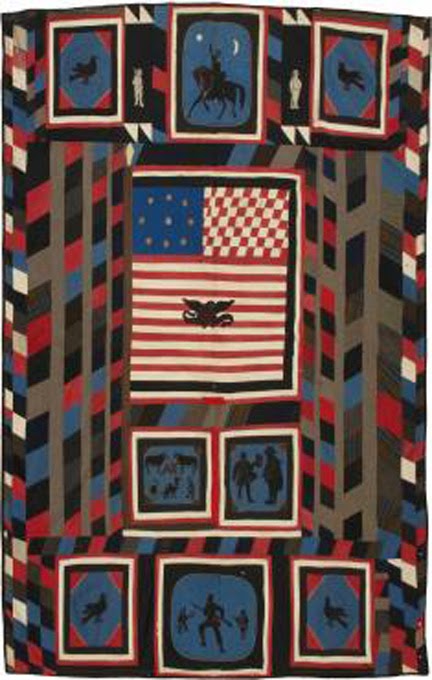 Made for “AK” in Pennsylvania by an unidentified quiltmaker, this textile from the Homefront and Battlefield exhibit illustrates the life of a Zouave soldier. It includes fabrics used by seamstresses at the Schuylkill Arsenal in Philadelphia to make Zouave uniforms. “AK” may have been Adam Keller or Albert Keen, both of whom served with the 88th Regiment, Pennsylvania Volunteers, which boasted two companies of Zouaves. Collection of Kelly Kinzle.

Homefront & Battlefield: Quilts & Context in the Civil War, the 2013 exhibit curated by Lynn Z. Bassett and Madelyn Shaw and organized by the American Textile History Museum,will travel to the New York Historical Society Museum and Library in New York City. 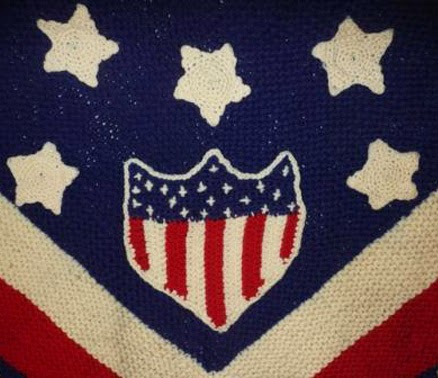 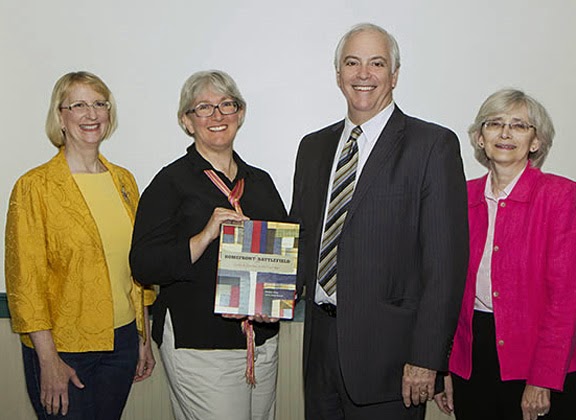 The American Textile History Museum (ATHM) was awarded a bronze medal in the 2013 Independent Publisher Book Awards for the U.S. History category for Homefront & Battlefield: Quilts & Context in the Civil War, the book that catalogs the show and examines how textiles were both an expression of and a motivating force behind American politics and culture during the Civil War.

I would love to go to the exhibits in New York. We have a new train station nearby so I need to see where it goes, would be fun to take a train to NY.

On your recommendation I looked up the book and requested it by interlibrary loan. The copy I received is from the Illinois State Museum -- I'm the first to check it out! (ISM got the book because there are quilts from their collection in the exhibit.) I'm on chapter two -- savoring the text and the pictures. I may have to buy it for myself. I wish the exhibit was going to be somewhere near me. (But, hey, I'm retiring! I'll have time to travel!)

I bet it's worth a drive to see.

I am wondering when the instructions for the boarders will be available? I received my fabric and want to start working on the boarder as I go. Thanks!

Thank you Barbara for promoting this, just went to the exhibit today. It was wonderful and I was floored to see that the Linda Ward - Honstain "Reconciliation Quilt" was there in the flesh (so to speak)!

People should also know that the museum store has actual antique quilts and quilt blocks for sale.