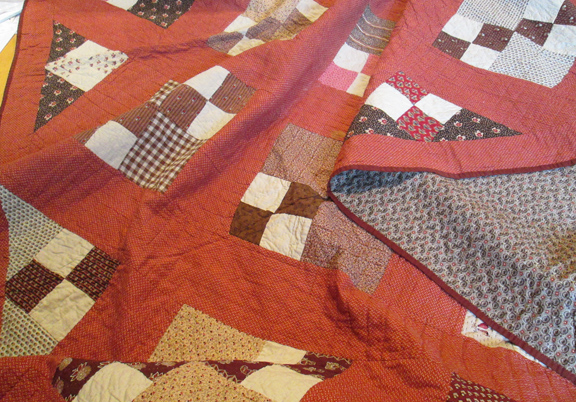 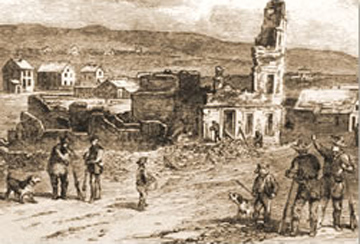 150 years ago this week a group of Confederate guerrillas from Missouri rode into my home town and killed about 200 people, a large proportion of the male civilians in the town.

All week we've been remembering with events as diverse as walking tours, Twitter feeds and souvenir bandanas. My personal sesquicentennial event was coming across this Civil-War-era quilt with a link to a family who survived the Lawrence Massacre. 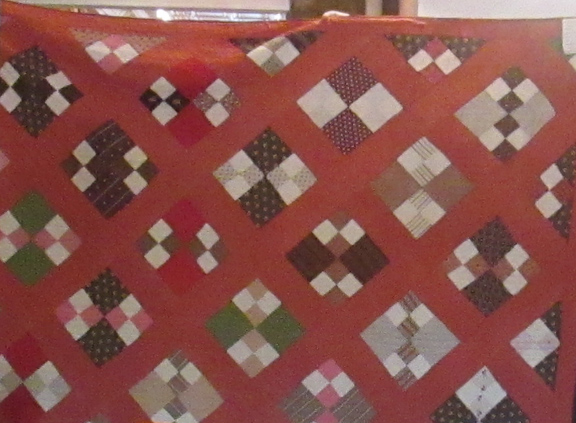 "This quilt was pieced---a complete surprise for my mother---when I was nine years old.
Almost every piece in it is from dresses of members of the family.
Alice L. Metcalf" 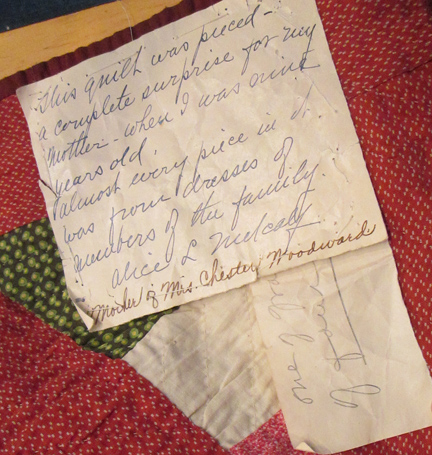 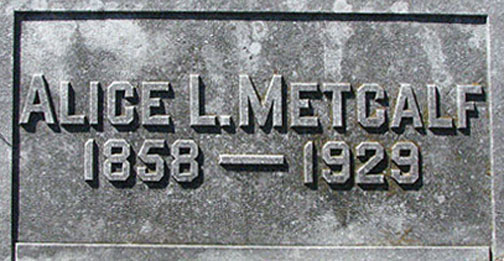 Alice made the blocks for this quilt about 1867 as a gift for her mother Catherine. The widowed Catherine and her daughters probably lived in Kentucky at the time. Alice's father Joseph Richardson Browne had died  in 1862, the same year Alice's sister Josephine was born. We can imagine Catherine's pleasure at seeing her daughter's neat four-patches and recognizing prints from the family scrapbag. 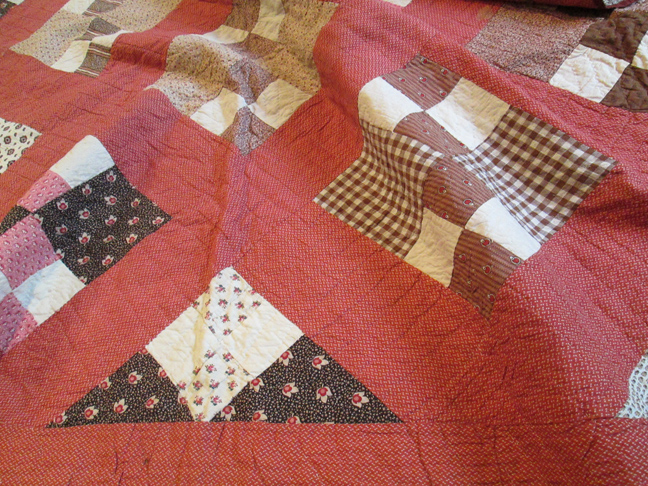 The quilt may have been set together later but the four-patches look to be of prints from an 1860s wardrobe....

...many madder-style browns, oranges and pinks
with a few Turkey red prints.

Bullene's is to the right of the big boot sign.
The photo from the late 1850s is from the collection
of the Kansas State Historical Society.

William came to Lawrence as a child with his parents in 1857. His father opened a dry goods store, which is still in business here as Weaver's Department Store.

On August 21, 1863 15-year-old William and his father were lucky enough to survive the Lawrence Massacre. William's father Lathrop Bullene was in New York on a buying trip. 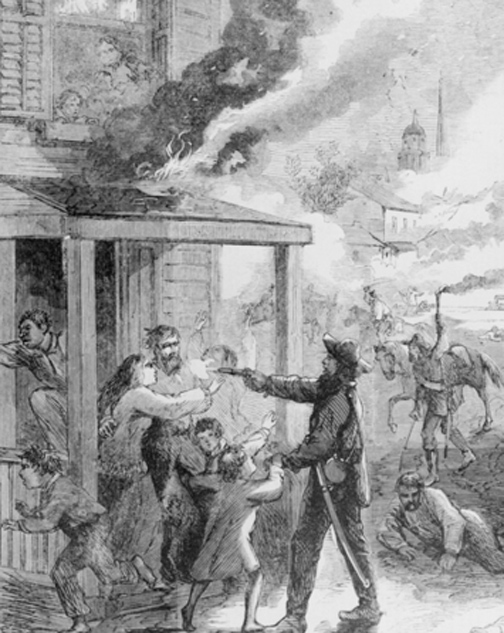 William somehow escaped the attention of Quantrill's raiders, who were inclined to shoot any adolescent boy they came across. William's stepmother Susan Read Bullene saved their house from burning by pleading that her elderly mother was too sick to be moved from her bed. She was forced to cook breakfast for the raiders. 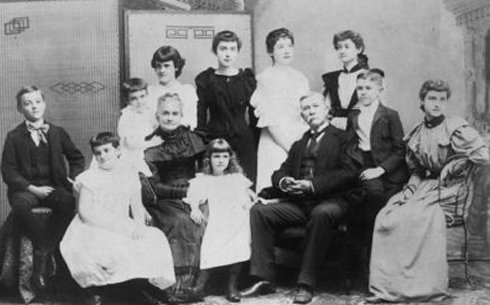 Susan Read Bullene and husband Lathrop about 1890 surrounded by
their grandchildren .
Collection of the Kansas State Historical Society 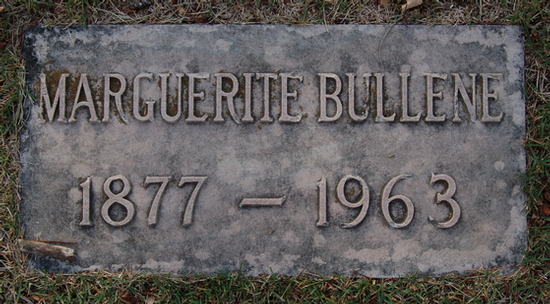 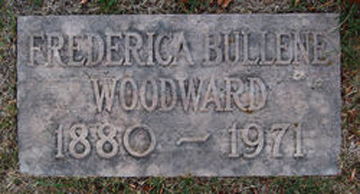 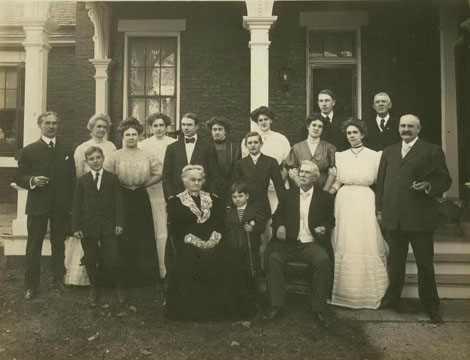 Susan and Lathrop with perhaps the same grandchildren a few years later.
Collection of the Watkins Museum.
Frederica is probably in both family pictures.

A gathering of survivors 100 years ago this week.
Library of Congress Collection.
William Bullene is likely to have attended the
reunion.

Frederica, the youngest, inherited the quilt with the note from her grandmother attached. Frederica's granddaughter Nancy Ann Woodward Myers has cared for the quilt into the 21st century. The fabrics are in excellent shape. 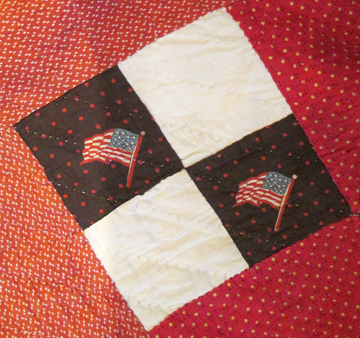 We might wonder if Alice's Kentucky family was Union or Confederate in a state divided by the Civil War. A flag print seems to tell us of Union loyalties. 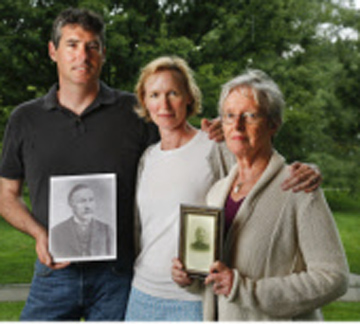 Mike with wife Nancy and her mother Pat.
All are descended from victims of the Lawrence Massacre.
Mike showed me the family quilt.
Photo from the Lawrence Journal World by Nick Krug.

Here are some links to our Civil War sesquicentennial, recalling the raid of 150 years ago:
http://www2.ljworld.com/news/2013/aug/18/lawhorns-lawrence-150-years-later-quantrills-raid-/ 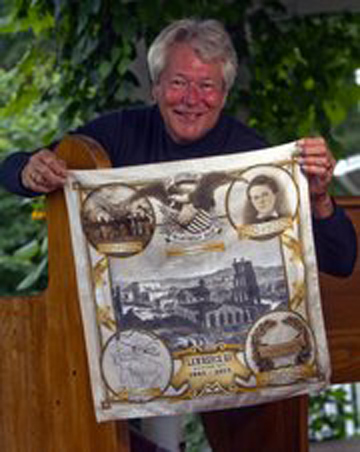 And here's a story about the commemorative bandana that might make a good center for a quilt:
http://www2.ljworld.com/news/2013/aug/07/longtime-lawrence-resident-creates-bandana-commemo/
Posted by Barbara Brackman at 6:00 AM

cannot believe a nine year old made that beautiful quilt. and was instinctive enough to leave the note or its heritage for all to follow...a great story

That is an amazing story and a beautiful quilt. It is wonderful that it was preserved so well and the story behind it.

Although we more often think of the Civil War battlegrounds in the East and South, perhaps those in Ken Burn's Civil War series, Kansas and Missouri, marked by mixed allegences and guerrilla warfare, might have been the worst places for residents to try to survive the War. When I was a child, Quantrill was routinely depicted on TV as a brave rebel hero and Texas ranger. A most unfortunate distortion of history. Psychopathic mass murderer seems more appropriate.

What a fascinating story!
This is a part of civil war history I didn't recall. Thank you!

What a wonderful Civil War era quilt with such a superb provenance. Kudos to the current caretakers.

I was glad to learn that you meant Lawrence, Kansas, because there is also a Lawrence, Massachusetts, too.

Both Lawrences named after the same family.