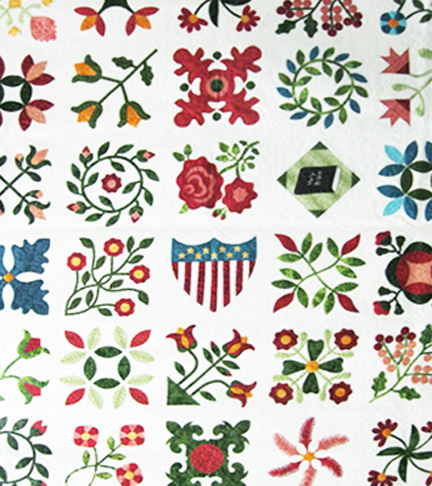 The Circuit Rider's Quilt
by Jenifer Dick, copy of a quilt in the collection of
The Art Institute of Chicago

Few quilt have the name recognition of the Circuit Rider's Quilt, an Ohio album, that has been romanticized over the past hundred years by the woman who donated it to the Art Institute and by several twentieth century quilt writers. Most recently it was a block-of-the-month in the Kansas City Star and a pattern book by Jenifer Dick---an excellent source for mid-19th century applique designs. 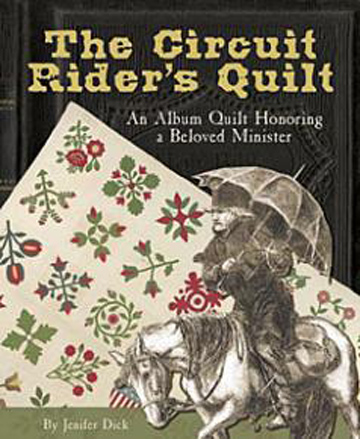 Although most of the history associated with the quilt has to do with the minister for whom it was made, I thought it might have some connection to the Civil War. Like many other samplers of the 1860s it features a Union shield in the center. 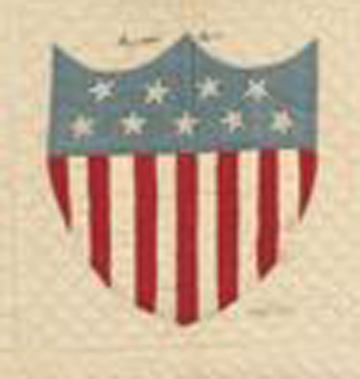 The shield from the original quilt.

Might we consider it a Civil War quilt or a commemorative?
I assume that there is no date actually inscribed on the quilt. The Art Institute caption and most writing dates it to 1862, which makes one think it would qualify as a Civil War quilt, but Susan Price Miller, who did an extensive study of the quilt for an American Quilt Study Group paper, dates it to 1867, based on genealogical information about the signers.

We can hypothesize that it's a Civil War commemorative quilt, however, because of the Union shield in the center. Above and below the shield are the names Augustus Troth and A.J. Troth.  Miller assumes this "symbolizes his status as a Civil War veteran." He was a private in the Ohio Infantry in the war.

The quilt was presented to George Warvel, a minister in the the Church of the United Brethren in Christ. Over the years it has come to be called The Circuit Rider's quilt, although Warvel was not a circuit rider. Miller discusses the mythmaking behind the quilt in her paper.

Miller found out more about Augustus Troth, most of it scandalous. It appears he had an affair with his wife's hired girl and left town abandoning both the wife Lizzie Troth, the servant Nancy and her child Orie. The women raised the child together. See some discussion of the scandal by descendants here:
http://archiver.rootsweb.ancestry.com/th/read/PREBLE_CO_OH/2005-03/1109803377 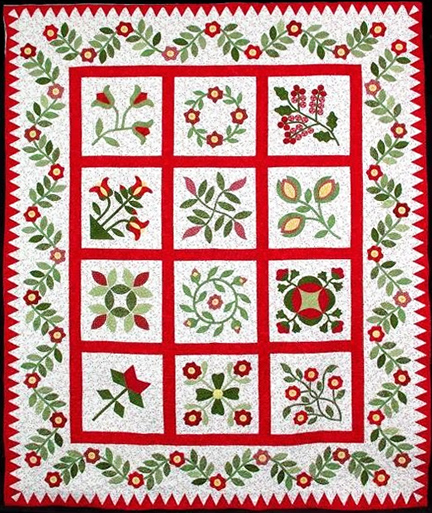 UPDATE
Jenifer Dick, author of the pattern book The Circuit Rider's Quilt added some information. She believes the quilt's name is correct as the minister for whom it was made did ride a circuit. In her book she outlines all the circuits, stations and missions he served at in his career –"All information," she says, that "I got directly from the United Brethren Church archives in Ohio. They consider him a circuit rider, so I never questioned that part of the story…
She adds:
"The reason the quilt is dated 1862 is because that’s when he left the Low Chapel where the congregation who made the quilt were. He left the appointment when he enlisted in the 167th Regiment of the Ohio Infantry , Company E. 100 days service (as a Chaplain). After his service, he did not return to Low Chapel and was onto another circuit. It would be highly unlikely that congregation would have waited 5 years to make him the quilt (not improbable though.) "

I say: Either date I think we can classify it as a Civil War quilt.


Here's the abstract describing the paper:
In 1919, the Art Institute of Chicago accessioned an appliquéd album quilt which had been donated by Emma Blanxius Hodge, called the “Circuit Rider's Quilt.” Accompanying information described it as having been presented to George C. Warvel, an Ohio minister. An article published in 1923 portrayed Warvel as an iconic circuit rider of the frontier, and this romanticized story was repeated in print media throughout the twentieth century. The disparity between the romance and the reality of the quilt's story serves as an illustration of the powerful influence of the Colonial Revival movement in twentieth-century America, the roles of collectors and magazine writers in perpetuating popular stories, and the important contributions possible through partnerships between committed quilt researchers and museum curators.

I think it's enough evidence to qualify the sampler as a Civil War commemorative. I added it to my Pinterest Page Quilt Civil War.
http://pinterest.com/materialculture/quilt-civil-war/

I always enjoy hearing the stories behind the quilts and how their quilts came about.

How nice that the myth was debunked!

I have happily appliqués the Circuit Ruder quilt shown in the last picture and enjoyed reading about the history of it on your blog. Thank you!