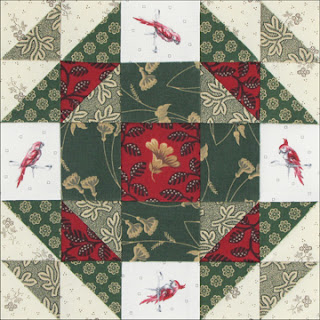 Christmas Star by Becky Brown
This modified nine-patch block with a wreath in the center can remind us of the first Christmas of the War. You'll find out why Becky put parrots in it below. 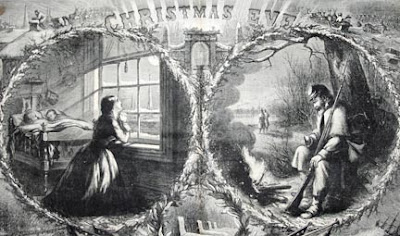 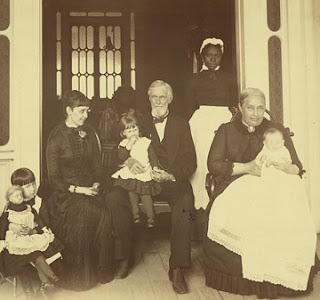 The Davises with daughter and grandchildren in 1885
In 1896 Varina Davis, first lady of  the Confederacy, wrote a memoir about Christmas in the Confederate White House. She told of her children repairing broken toys for the neighborhood orphans in Richmond during the War's last winter. 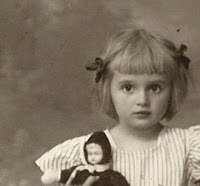 "While looking over the advertisements of the toys and everything else intended to make the children joyful in the columns of the city papers, I have been impressed with the contrast between the present time and the... Southern country thirty-one years ago....

"For as Christmas season was ushered in under the darkest clouds, everyone felt the cataclysm which impended, but the rosy, expectant faces of our little children were a constant reminder that self-sacrifice must be the personal offering of each member of the family. How to satisfy the children when nothing better could be done than the little makeshift attainable in the Confederacy was the problem of the older members of each household. 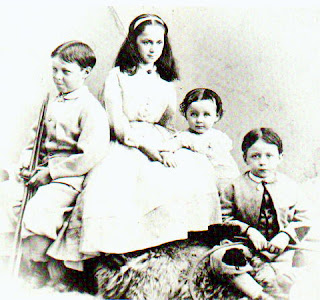 The Davis children early in the War.

"The ladies dispersed in anxious  squads  of  toy-hunters,  and  each  one turned over  the  store  of  her  children's treasures for a contribution to the orphans' tree,  my  little ones rushed over the great house looking up their treasure:  eyeless  dolls,  three-legged  horses, tops with  the  upper  peg  broken off, rubber tops, monkeys with all the squeak gone  silent  and  all  the ruck of children's toys that gather  in  a  nursery  closet. 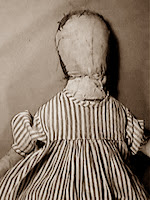 "Some  small  feathered chickens and  parrots  which  nodded their heads in obedience to a weight beneath them were  furnished  with  new  tail  feathers, lambs minus much of  their  wool  were supplied  with a cotton wool substitute, rag dolls  were  plumped out and recovered with clean cloth, and the young ladies  painted their  fat faces in bright colors and furnished them  with  beads for eyes." 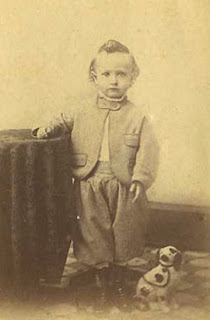 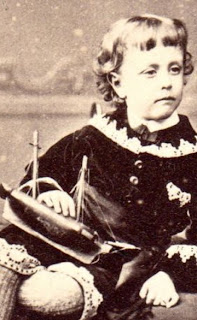 Boy with a toy boat, about 1880
The name Christmas Star was given to this block by the Oklahoma Farmer Stockman periodical, which had a quilt column in the late 1920s and '30s. The pattern (BlockBase #1806c) has other names and different shadings, among the names: Wedding Ring, Crown of Thorns and Memory Wreath. I modified it a bit so the grid based on 5 fit an 8" square better. 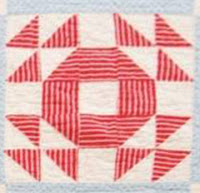 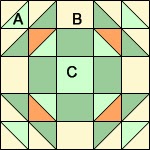 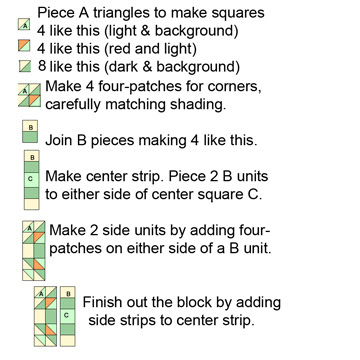 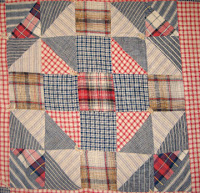 A block from about 1900---be careful how you turn your triangles. 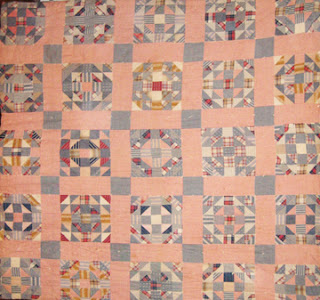 This block was one of the most popular in the early 20th century.
Posted by Barbara Brackman at 6:00 AM

Merry Christmas to all members..
so nice, that we are all here together and sew this wonderful blocks..thank you Barbara..

This block is a beauty, thank you Barbara.
Wishing you and yours a Happy Christmas -)

I have a special question:
who want this book:
The Civil war diary quilt from Rosemary Youngs..
I have this book twice..and made the quilt before some years,
if you are interssted please write me:
Claudia@hibi.eu

A perfect block for the end of the year.

How perfect is that for this Christmas Eve Saturday! Wonderful planning, wonderful post. Merry Christmas to you, Barbara, and all the stitchers!

Love this block and the Christmas story that goes with it. Funny how some things never change. Hopeful children and kind hearts. Thank you Barbara for a wonderful year! May your days be merry and bright. Merry Christmas.

Joyeux Noel à toutes ! I was happy to do this quilt and read all of you- thank you Barbara for this great gift you've offered us all the year along- Que la paix soit avec vous (peace on you) DomyR974 ile de la Réunion/France

Merry Christmas and a Happy New Year from Gemany!! And a big "THANK YOU" to you, Barbara, for all your efforts in sharing all these blocks with us! It was a very creative year and I'll miss tha Saturdays blocks...
Many many greetings and best wishes from Regina

Merry Christmas to all of you I have been sewing with this year. To Barbara B. thank you for all the work.

To everyone who posted the photos of their work on the Flicker page, thank you for showing possibilites and color schemes.

Can't wait to complete the two I have been making all year.

Bella and the peeps said...

Hi Barbara,
Thank you so much for such a wonderful gift. I know I am only 1 of many who will miss your posts on Saturday mornings. In this weeks post, do you have any more information or a link on the antique quilt at the bottom of the page? Warm holiday wishes to you and your family.

Thank you so very much for your weekly Civil War Quilt block pattern/background-story you gave to us through the year 2011. I watched weekly for your pattern emails, they gave me more consistancy than anything else I've ever been given.
Blessing to you & yours throughout 2012.

A wonderful story and block. I have completed my block and posted it on my blog along with a how-to.

Barbara,
Where did your cockade images come from (May 2011)?
Elizabeth