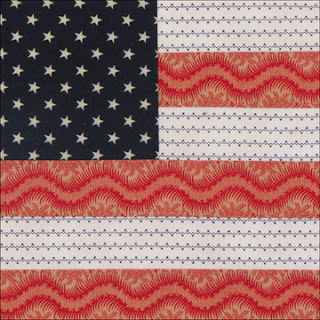 New York
This week's block can recall the ladies' fairs that raised funds for soldiers' aid. 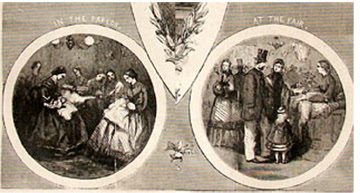 "In the Parlor: At the Fair"
By Thomas Nast
150 years ago December brought preparations for the annual ladies' fairs, the ancestors of our Christmas crafts bazaars. During the Civil War these charity events benefitted soldiers North and South. 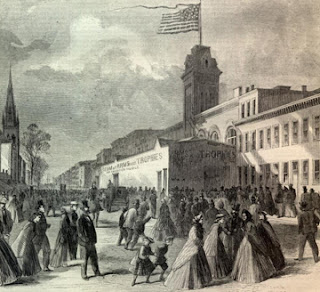 The largest of them all was the Great Metropolitan Fair, which took place in New York City in 1864. 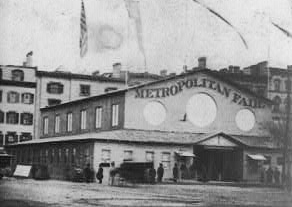 The fair to benefit the Sanitary Commission was held at Union Square (actually named because it was at the union of Broadway and the old Bowery Road, but an appropriate location, nevertheless.) 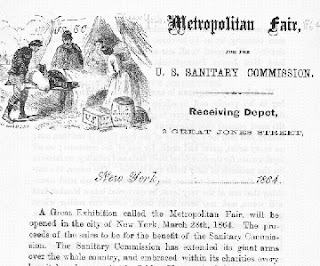 Fairs often sold needlework and crafts made by women, but this fair also was like an industrial exposition with states and cities showing off their manufacturing. It was resembled an antique show too with paintings, furniture and curiosities for sale. 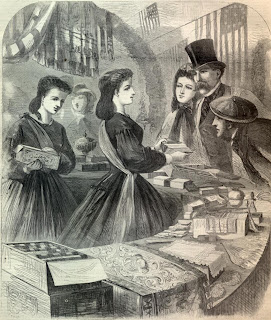 Women organized it and "manned" the booths. 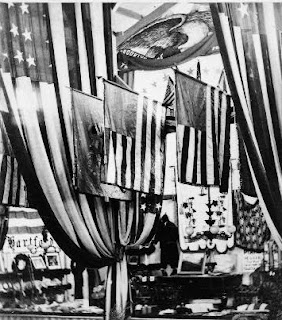 Here's a photo of the booth for the city of Hartford, Connecticut. 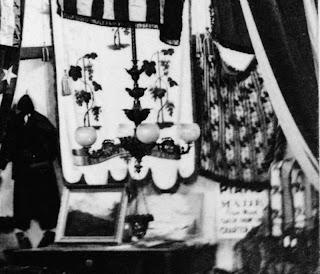 A blow-up of those items hanging next to a soldier's uniform indicate that one is an embroidered banner and the other possibly a four-patch strip quilt. Quilts were definitely part of the fairs.
The Fairs raised a good deal of money, although French visitor Ernest DuVergier seems to have begrudged the donations he made to the Philadelphia Fair ...

"Nothing is more ingenious than the way they get money from visitors. They have discovered an infinite number of different temptations and traps. I pay to get in, I pay to get out, I pay to see a museum where well-varnished examples of run-of-the-mill native painting shine by gaslight; I will pay if I want to take part in the vote which will award a silver vase to the most popular politicians...."

Hey, Ernest, it was all for a good cause. 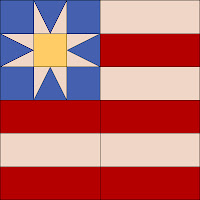 The block named New York was published in Hearth and Home magazine about 1910. The pattern featured a pieced star in the corner. This week's block is adapted for an 8" pattern with a star print in the field area. 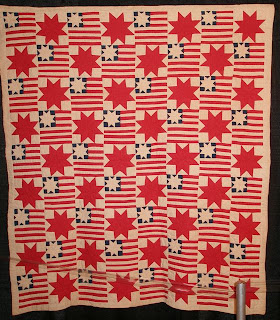 Last year at Quilt Market Cindy Rennels showed off her patriotic quilt that alternates a version of the New York block with a larger star. 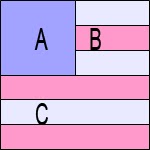 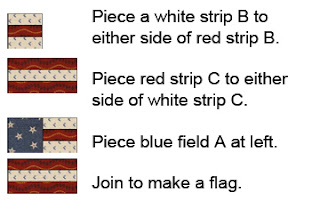 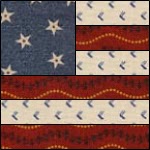 This easy block might make extras for the corners of your quilt. We're getting down to the end of the 53 blocks here and you are going to need 56. I'll give you another corner option at the end of the month.


Many of the Sanitary Commission fairs published newspapers every day they were open.
See The Canteen, the publication of the Albany fair by clicking here at Google Books:
http://books.google.com/books?pg=PA8&dq=canteen+albany+sanitary+commission&id=H2hUAAAAYAAJ#v=onepage&q=canteen%20albany%20sanitary%20commission&f=false
And The Drum Beat from the Brooklyn Fair by clicking here:
http://books.google.com/books?pg=PT23&dq=drum+beat+brooklyn&ei=9TMvTtSTCrC30AHWgv2tAQ&ct=result&id=qKk-AAAAYAAJ#v=onepage&q&f=false 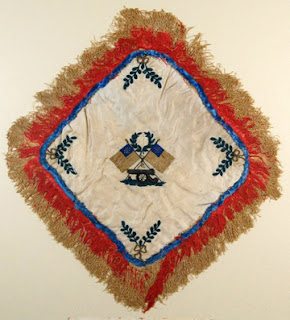 Embroidered silk pillow top with a history
that it was purchased at the Metropolitan Fair
﻿
Posted by Barbara Brackman at 6:00 AM

Dear Barb, THANK YOU for the weekly lesson on the Civil War and the accompanying blocks you chose to represent the historical events of that time. You obviously did a tremendous amount of research and I am thrilled you did! I have had fun sewing each block and look forward to "catching up" on the blocks I have yet to do :)

What an appropriate block, it is great having the soldiers coming home from Iraq. God bless our country.

A nice easy block. I have completed my block and have posted it along with a how-to on my blog.

dear barbra ,it was a very nice year of saturdays fo me, i am born on a saturday by the way,and i will miss it very much,thanks a lot for this inspiring journey in the past,yours susi from germany

Barbara thank you very very much for this great CW quiltyear, the blocks and stories were so wunderfull!
I put a picture of my top at the flickr photogroup (connysquilts). I enjoined making it! Thanks to you: another heirloomquilt! Kind greetings from the Nethrlands.

Thank you for a wonderful year of quilt blocks. I finished the last one today, and I have the fabric ready to put together the top. I have learned much, both about history and quilting in putting together the many blocks. Your blog initiated many conversations with my husband, and we even took a recent trip to Chicamauga to visit the battlefield. I have thoroughly enjoyed your blog each week.

Will all the blogs including the historical content be included in your book? I just found your blog with all the WONDERFUL info and would like to print it out - BUT, if it's all going to be in the book (published SOON, I HOPE) then I'll wait and just do the blocks as I can. Love all your books AND fabrics. Thank you SO MUCH!