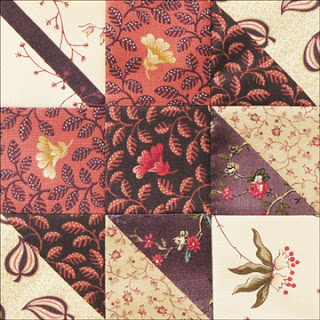 Tea Leaf by Becky Brown
The Tea Leaf block can remind us of Dixie and Confederate coffee substitutes during the blockade. 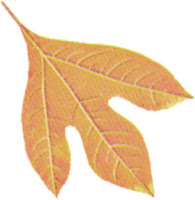 Sassafras Leaf
Mary Mapes Dodge in an 1888 story Two Little Confederates painted a picture of the limited treats her two main characters enjoyed during the war:
"There was no sugar nor coffee nor tea. These luxuries had been given up long before. An attempt was made to manufacture sugar out of the sorghum, or sugar-cane, which was now being cultivated as an experiment; but it proved unsuccessful, and molasses made from the cane was the only sweetening.... Sassafras-tea was tried as a substitute for tea, and a drink made out of parched corn and wheat, of burnt sweet-potato and other things, in the place of coffee; but none of them were fit to drink — at least so the boys thought." 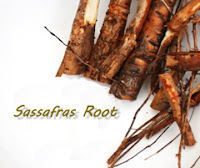 Sassafras tea made from roots and bark has long been a home-brewed beverage. It's the traditional flavor in root beer, and so much a Southern staple that a reference to "cinnamon seed" or sassafras tea is found in older versions of the song "Dixie", the unofficial Confederate anthem. 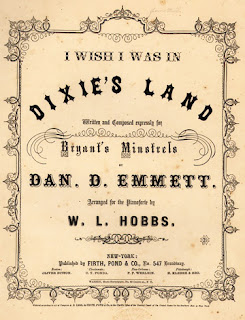 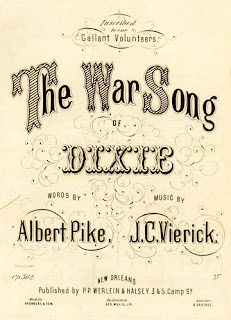 Soldiers on both sides invented numerous versions and as the word Dixie increasingly became a nickname for the South, patriotic versions were published, such as this 1861 “Dixie War Song.”
Southrons, hear your country call you,
Up, lest worse than death befall you!
To arms! To arms! To arms, in Dixie!
This week's block is #1735 in BlockBase, one of many variations on this nine patch. Pattern designers saw it as a tea leaf, a poplar leaf, a magnolia leaf and an a maple leaf, among other flora and fauna. 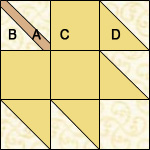 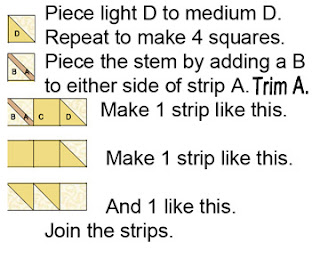 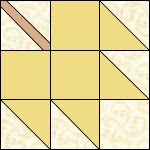 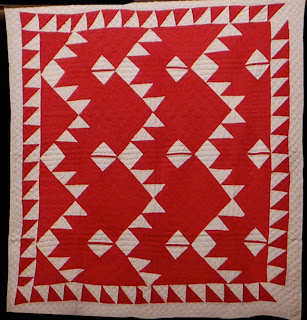 A tea leaf quilt from about 1880-1910
at the Red and White Quilt Show in
New York last spring.
Hear a 1916 version of the minstrel song "Dixie" by the Metropolitan Mixed Chorus on YouTube by clicking here: 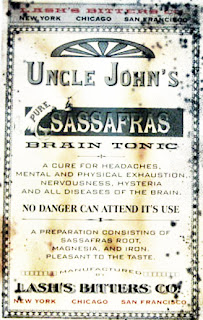 "A preparation consisting of sassafras root, magnesia and iron.
Pleasant to the Taste."
Root beer in the guise of patent medicine.
Posted by Barbara Brackman at 6:00 AM

The red and white tea leaf quilt looks very Navajo! Thank you for an interesting lesson and an interesting block. I never knew so many of these things! I'm going to miss the lessons when you are finished. I caught up 10 blocks this week! I'll be on 31 on Monday.

I came in late but I love this site. Thank you Barbara!! I've made 3 blocks so far almost finished with my fourth. Love your stories!!

This is an easy block and fun to do. I have completed my block and posted it on my blog along with a how-to.

Another great post. I always loved that tune and now I know the history behind it. The coffee and tea substitutes sound awful. Makes me appreciate my Lipton green tea and Folgers coffee all the more!

Another great block. While I was printing last weeks post,my husband who taught U.S.History in Junior High for 37 years asked me if you posted or had plans to post any blocks representing the major battles of the war. I told him I would ask. Dotty

I love Sassafras tea. I remember my Dad pulling the tree roots when I was a child living in PA. My grandma drank it & she said you shouldn't drink too much or it would thin your blood. I don't know if that was true.

Oh I like that red and white quilt. If you replaced the red squares with more leaves, but flipped around the other way you'd get a nice jaggedy zig-zag effect.

I love reading your posts and I am getting back into quilting after a 20 year lapse, (work). Lol.. Thank you so much!

Tasted like milk tea from hawker centers but with a citrus twist aftertaste. healthy tea melbourne

The Tea Leaf block can remind us of Dixie and Confederate coffee substitutes during the blockade. powder green tea perth