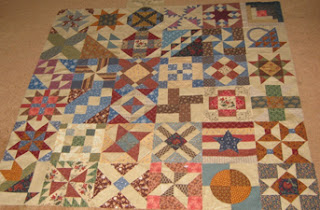 We are coming close to the end of the year and the end of the 53 blocks (there are 53 Saturdays in 2011.) I am so impressed with how many of you have kept up with the block a week.

It's time to think about setting. You could just put them side by side the way DorsetSpinner has them laid out on her floor above. I've gone through our Flickr group and found some setting ideas. 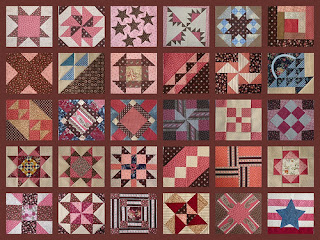 I'd suggested plain sashing strips between them the way 1000Scraps has them mocked up here. 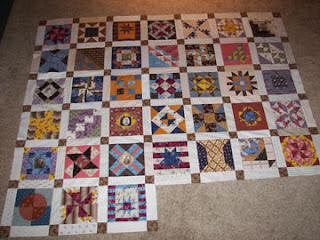 Rosemary has hers put together already using sashing with cornerstones. 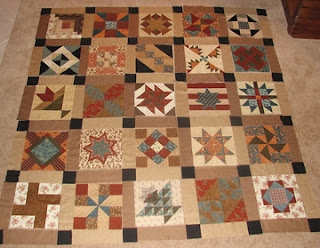 The same idea that Here's Lucy is contemplating on her design floor. 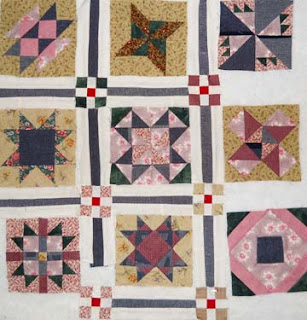 Dustin and Becky are using a triple sash with a cornerstone nine-patch. 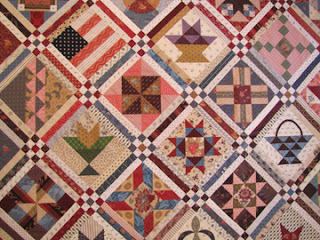 Becky who tested all the blocks has hers set,
quilted and bound, thank you very much. 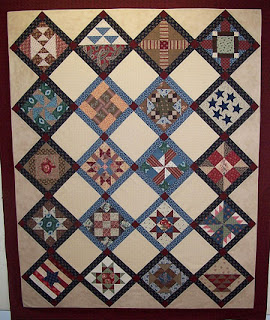 ImaquilterWis has finished her top, sashing the blocks
and using an alternate plain square. 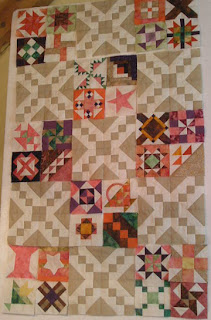 Atelier Arte Pink is grouping hers into fours 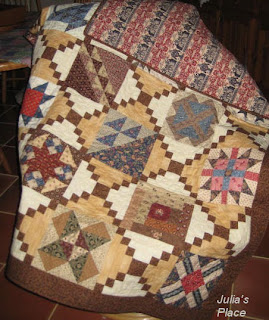 Ribbonwiz is also finished with a chain block alternating. 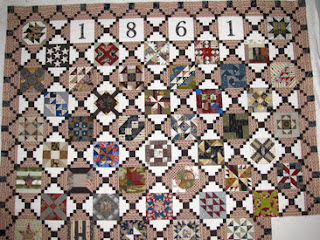 The same set that Elleninfil is using. 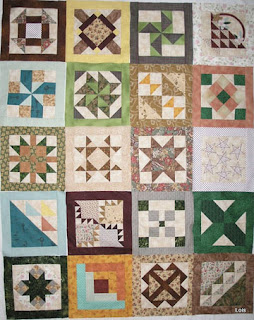 Lois is going to frame each block ---probably a good idea since some of them
are bound to be 7 7/8" and others 8 -1/4".
With a frame you can squares things up nicely at the end. 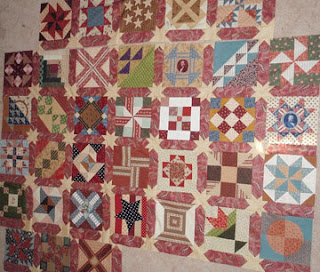 And QuiltingGammy plans a sash with a star in the corners.
Keep those good ideas coming!
Posted by Barbara Brackman at 6:00 AM

Love all the ideas, makes me want to finish those last blocks, the stars with sashings looks very patriotic and the nine patches with the tripple sashings are great too!

Great ideas...like the triple sashing to make the quilt just a tad larger and to use up scraps!

I think they all look fantastic! Just can't decide what I'd like to do. But I spy a flag and basket block in our future....

Terrific looking blocks for all...and the completed quilts are stunning! Sashing seems to be the direction I am headed in...so many choices.

It is amazing how quickly this year has gone by. I guess it's time to think about the sashing and I love the star idea. Everyone has done such a great job.

I so need to catch up on my blocks! Everything has gotten away from me the last few months. I haven't even thought about layouts yet!

Everyone's quilts are looking great. I've been following your blog but haven't actually made any blocks. I thoroughly enjoy the stories that go with the blocks.

I thought id stop by and post a comment since im checking out some new blogs. So greetings from the Amish settlement of Lebanon ,Pa. Richard from Amish Stories.

Will the blocks stay up for a while for those of us who discovered the blog long after January?

Thank you for posting the pictures of the quilts in progress, I absolute love everyone's ideas. I think it is going to be so interesting when so many people finish their beautiful quilts. I am really honored that you posted a picture of my quilt. We have all loved the Civil War history so much every Saturday morning.

Wonderful quilts ! I love these ideas ! Thanks a lot for sharing them with us.
I don't know yet how I'm going to finish mine... Great inspiration, here ! :-)

They all look great but I especially like the one with the "1861" on it by elleninfil. Now I am inspired!

ALL those quilts are absolutely STUNNING! I have kept up with the blog (not actually quilting) and have absolutely LOVED it!! I hope this 'end' with not be an end....;)

Would love to make this quilt but by the time I found this site back in May, I was already deep in making another civil war quilt. Can you tell me if once this is all done, will you keep the site up and running or maybe publish these in a separate book later. I am just afraid by the time I am ready to make them, It won't be there anymore! Love the history with the blocks!

Thanks for posting the quilts in progress. I like the lighter cream sashing with cornerstones. The light sashing frames each block to showcase it. No blocks are lost in the total quilt at all.

hi Barbara , have you see my layout from this blocks on Flickr?

So much to think about and i'm really grateful for all the inspiration. Must admit my fave is on point, however, i will also need to frame some of my blocks first.
Thank you again for generously giving us these wonderful BOW, i have learnt so much and been immensely inspired along the way!!

Thank you for the visual, lots to think about. We are almost finished, it's been a good year.

I've been reading and sewing all along the way (beginner quilt block maker here)... but first time to post. WOW, how much I have learned from you! Thank you!!!!

I am following Lois' idea, since I have no idea otherwise how to square them all up to the same size. Yes, some are 7 7/8", some are 8 1/8".
Thank you for the weekly history lessons, for turning me into an avid reader of Civil War history, and for teaching me some quilting ideas!

What is your next project for us? I can't wait!

I see my idea on quilting grammies, only my stars are in cheddar. Piecing the sashing as to keep the stitching chain going under my needle while piecing other things. I haven't sewn my blocks and sashing together, but it sure looks good. Thank you for a fabulous project.

Many thanks to everyone for showing their different ideas for putting the quilts together, as well as all the different ways each person has chosen individual fabrics for their squares. I love the quilt that has the year on the front. Maybe Barbara has a block in mind? It would be fun if everyone had access to a quilt label that Barbara designed for this special project. Many thanks to Becky for all of her creativity and beautiful sewing. When we get to the end, sniff...sniff, is there any chance we can see a photo showing all of Becky's quilt spread out in a flat surface? Barbara, many thanks for showing all the different layout ideas, as well as for your gift of this wonderful project.