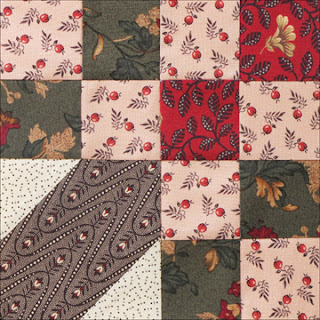 Apple Tree by Becky Brown
Apple Tree can remind us of a Union marching song about Jefferson Davis.
One hundred and fifty years ago this week  Jefferson Davis was formally elected President of the Confederate States of America for a six-year term. The candidate ran unopposed. And who could oppose him?  He personified the Confederacy and it's principles, whether one considered him hero or villain. 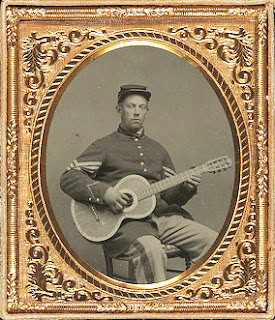 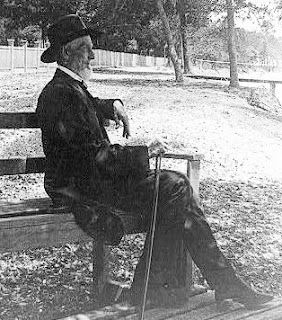 Jefferson Davis in retirement in 1885
Jeff Davis was not hanged. After the War he was released from federal prison in 1867 after serving two years. 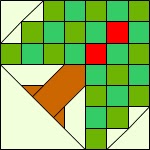 This week's apple tree block with red squares hanging in the green leaves was inspired by a block that Carrie Hall showed in her 1935 book The Romance of the Patchwork Quilt in America. The complex block is BlockBase #836. Hall called it Tree of Temptation, a version of the Biblical apple tree that tempted Eve. 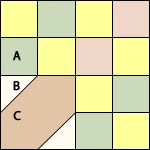 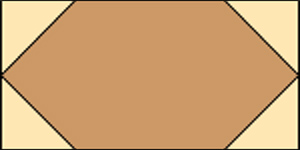 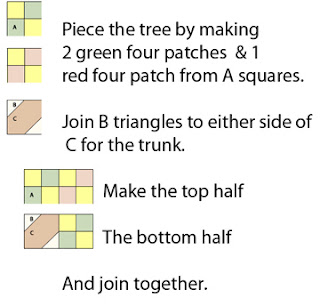 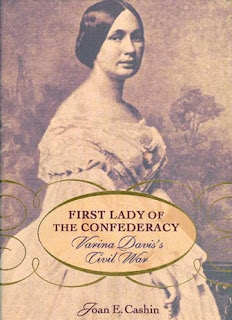 To read more about Jefferson Davis's wife see the First Lady of the Confederacy: Varina Davis's Civil War by Joan Cashin. On December 8, 2011 author Joan E. Cashin will discuss Varina Davis's struggle to reconcile her societal duties and expected allegiance to the South with her personal beliefs at the McConnell Center at the University of Lousiville. Information here:
http://www.facebook.com/event.php?eid=209220675800349
It's a wonderful biography.
Posted by Barbara Brackman at 6:00 AM

Think the blocks for the trunk isn't right in the piecing directions. It would be a 4-14/ inch square not a rectangle...right?

Thank you for another great block! This one will get done today, even though I'm catching up with 25 others. =) The sidebar is covering the post on my browser, so I'll come back later and read the story. I love those!

Instructions for the trunk are confusing me... At what degree or mark would I trim my corners? I'm new to quilting.

Not certain about the measurements, but, I think YankeeQuilter is on to something when she says use a square. It seems to me that you could make the square, sew the triangles onto opposing corners, and then trimming the base block and pressing out would accomplish your trunk block. Am I correct? Is this actually harder? (LOL! If it works is it cheating?) '-)

Note: Laying triangles on corner, mark base of triangle, flip and place on mark with with 1/4 seam allowance over/covering the mark.

This is a nice block. I have completed my block and posted it on my blog along with a how-to.

There is no cheating in quilting. There are many ways to do this. The finished trunk square is a square 4 - 1/4" (finishing to 4").
The brown piece should be a rectangle. You can trim it before or after you add the triangles. You could press a line in the brown piece right across the center and then press lines in the triangles in their centers and match up those lines.

3 friends in France gather weekly to sew a block from this amazing Sampler! Here are the latest news :
http://quilteuseforever.wordpress.com/2011/11/12/un-projet-commun-a-work-in-common-the-civil-war-quilt/

Barbara, each week is a delight thanks to you!

I've wasn't able to sew along this past year as you all have made this quilt but wanted to say that I have really enjoyed following along with the blocks and the history to go along with them. Thank you for all your hard work and sharing! I hope the blocks will be left up after the first of the year. Maybe I can start on then.....thanks again.

I love the apple fabric that Becky used. Do you think I can still find it in the stores? Becky does such a great job every week choosing her fabric.

Thank you, SueJean. The blocks are a joy to sew. Part of the fun is seeing everyone's fabric and I was attracted to this apple fabric in blocks made months ago. I ordered some and it arrived just in time for the apple tree! It is still available: Marcus Fabrics, "The Civil War Chronicles", by Judie Rothermel, design 2750. You can order it at fatquartershop.com

Finished my block today. What a fun project.

I am so sad! I just found your Blog! I feel like a parade just went by and I missed it. Barbara, will you do another quilt next year? How long will this blog be here. I'd like to make the quilt but don't want to get started and then have all the directions disappear.

I agree with Barbry, you wouldn't tear down a masterpiece like this would you? I too would love the opportunity to go back and create the rest of these wonderful blocks. There's all the history you've shared as well... It needs to stay! ~ Lynda
P.S. Will there be another quilt for next year? I sure hope so.