Confederate Rose
By Becky Brown
Nancy Cabot, quilt columnist at the Chicago Tribune in the 1930s, named several of the Civil War commemorative patterns in this series, most of which she designed herself. She gave us the Confederate Rose below, a complicated pieced design, which I have simplified here, giving the pattern for the center square. You may want to make it in shades of white, pink and rose, the colors of the Confederate Rose plant.
The original Cabot block is BlockBase #2651
if you want to make it just like Nancy's.
The Confederate Rose is a variety of hibiscus, unusual in that it puts out multicolored flowers. At the end of the 19th century people thought it might be a rose which began the morning with white flowers that turned red at night. Horticulturalists discussed it in their journals after a news story was published in 1884.

"The  'Confederate rose' is the name of a new flower which is white in the morning and red at night. Four of them have been planted around  the grave of Gen. Albert Sidney Johnson in the State cemetery at Austin."

Confederate General
Albert Sidney Johnson was killed at Shiloh in 1862.
A skeptical editor at the Gardeners' Monthly and Horticulturist wrote:

Ten years later a botanist identified it in Garden & Forest
"Hibiscus mutabilis, Cotton Rose, or Confederate Rose, is a small tree of rather open habit. I first noticed it in the gardens of New Orleans, and later at Mobile, Pensacola and Jacksonville. It is a fine plant when in bloom, bearing at the same time white and red flowers, and thus presenting a very striking appearance. The showy double flowers are white in the morning, changing to pink at noon, and to deep red at night. As the flowers last almost to the middle of the next day, the contrast of the white and red blossoms is very impressive. This plant is also known as the Mexican Rose; it is, however, a native of China and India, and thrives well on high Pine-land, but grows to perfection in rich hummock soil."

General Johnson's grave is a Victorian showpiece at the Texas State Cemetery.
He was originally buried in New Orleans; reburied in Austin in 1867.

Cutting an 8" Finished Block
A- Cut 2 dark squares 2-7/8". Cut each in half diagonally. You need 4 dark triangles.
B - Cut 4 light strips 6-7/8" x 1-7/8". Trim the corners at 45 degree angles or use the templates in the PDF file.
C- See the templates in the PDF file to cut 4 medium.
Click here: https://acrobat.com/app.html#d=ctFEwQNkH7bAhwqzvfhtKg

Read more about the Confederate Rose, a once-popular hibiscus at this site:
http://aggie-horticulture.tamu.edu/southerngarden/hibiscus.html

UPDATE MONDAY 9-12-11 for those having trouble printing the templates:

WARNING: Reading below this line may cause eyes to glaze over.
Here is a JPG with the template. Click on it. Print it so it comes out 8-1/2 x 11. We'll see if this works 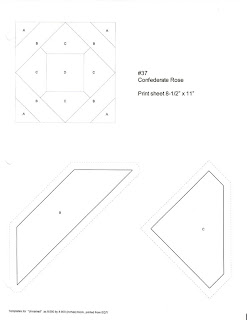 Later--I tried it and it did not print out the right size. Piece B should have printed out so the top dark line measured 2-7/8" (to match the long side of triangle A) but it printed out 2-1/8".
I need to enlarge it as it prints. By how much?

Well I have a tool, a proportion wheel, that I used to use in the old days of cut and paste layout. It  tells me that if I have a line that is 2-1/8" and I want it to be 2-7/8" I have to enlarge my print by 135%.
There has to be a digital proportion wheel. So I did a websearch for those words and found one
http://www.knightprinting.com/help/tools.php
I typed in the numbers-
first the current number 2.125.
Below that what I want it to be 2.875.
And then had it calculate. It says 133%. Close enough.
I then printed the JPG above by going to PRINT PREVIEW. At the top it says SHRINK TO FIT. I pulled down the menu to CUSTOM and typed in 133%. I see I cropped out some pattern pieces so I messed around on the sheet by going to full page view and adjusting the margins (little arrows) till I got it right in the frame. And I printed it. It's close.
It's probably easier to photocopy it at 133%
In any case, you might want to cut these shapes a little larger. Work out from the center and trim, is all I can say.
And I wonder why I never get any sewing done anymore. Computers are now my hobby. To put a happy face on it we can say we are learning math skills and printing skills. I'm bookmarking that digital proportion tool. It could be useful.
Posted by Barbara Brackman at 6:00 AM

I can't print it out to use as usual..pieces B and C. It says "you need to use the print menu item from INSIDE the Acrobat.com application". Well I don't have acrobat. Computer challenged. The content won't print out correctly.

If you are having printing problems, try saving the document first, then opening and printing it. It worked for me.

Now, I am off to make my block!

Thank you, Barbara, for a great quilt along. I can't decide which I like most, the sewing or the history.

Sorry about the more difficult template printing now. If you don't have Adobe Reader do a web search for the words download adobe reader. It's free and only takes a minute.

Have Adobe but apparrently the site is having some difficulties this am.

THANKS for the PDF! That helps so MUCH!

I too, am unable to print this template page. I did try saving the document as Deanna suggested, but I am unable to open it even after saving it.

I do not use Acrobat and do not wish to, although I do have another PDF program that allows me to save and print everything else to date.

Is it possible to save and print this document using a different PDF program other than Acrobat? I really would like to have this template page.

Your blog is a work of art! Awesome.

What a pretty block. I love the way Becky fussy cut the vine.

It's not the way the PDF is saved it's the way it's distributed, the cloud it is hung on. Those of you who can't access that cloud will have to wait while I work on other ways (besides PDFs) to get the templates embedded in the blog.

I, too had problems printing the templates initially, but was able to print it after saving it as a document to my computer. I DO have Adobe Acrobat, but could not print directly from Acrobat.com. When attempting to, only portions of the page would print, and then they were not sized correctly.

an american friend send me this link:
perhaps it is interessting for our members:

I solved this Adobe printing probem by saving the picture of the block on your blog as a bitmap file. Opening this file allowed me to independently adjust the size of the image to reach a perfect 8-inch square "finished" block image. I will now cut out each piece as a separate template (with appropriate seam allowances) and proceed to assemble the block.

This is a beautiful block. I have completed the block and posted it on my blog along with a how-to.

The picture of the good old proportion wheel made me laugh - in this day of high-tech everything we can always rely on the tried and true way.

Thanks for the digital link!

I just discovered another helpful tool:

Happy drafting and sewing to all.

I can't print out the templates either. Do you have a better way? Thanks!

I used graph paper and drew out the block starting with a 3" square in the center of an 8" block, and following the measurements given by Barbara in her Confederate Rose block instructions. I am loving the weekly challenge of these blocks!

I still have (and use!) my proportion wheel! It's much easier than the computer version for me because it uses proper fractions instead of converting everything over to decimal bits of an inch.