Kentucky Crossroads
By Becky Brown
Kentucky Crossroads can remind us of the importance of the rivers to winning the War. Western Kentucky, where the Ohio River joins the Mississippi, was an important crossroads of waterways. Many of the skirmishes in late summer, 1861, were fought  by gunboats in the area. 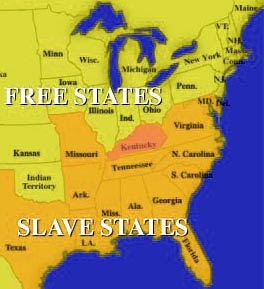 Kentucky (in orange in the middle of this map)
was a border state
that remained in the Union
Kentucky began the War as officially neutral but it was a slave state with split loyalties. Neutrality was often impossible to maintain. As Union sympathizers gained political strength during the summer of 1861, Confederate troops went  in to secure the Mississippi River for the South, taking over the town of Columbus and the river below that. On September 6, 1861 General Ulysses S. Grant's Union Army occupied the town of Paducah at the junction of the Ohio and Tennessee Rivers, ensuring that the North controlled the Ohio River. 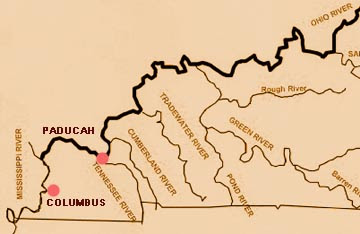 Western Kentucky
Paducah remained under Union occupation for the duration and Kentucky remained a Union state, although the Confederacy held on to Columbus and the lower Mississippi for several years.

Mr. F. Beard sketched the town for Harper's Weekly six weeks after Grant's takeover. He described occupied Paducah as a

"beautiful little city, full of respectable and often elegant residences. It now wears, however, a deserted and melancholy appearance. Whole streets of tenantless buildings stretch from the landing to the intrenchments; and the few inhabitants who remain, although entirely unmolested and secure, look guilty and sullen. Some of our boys left the steamer Sunday, and, wandering about the town, took possession of the deserted choir of a secesh church, and one of our number being a good organist, and most of us having assisted before on such occasions, we did our best to convince those within hearing that, although belonging to the 'Northern rabble,' we were not altogether heathen and benighted."

The pattern Kentucky Crossroads was given the name in an early 20th century magazine. My source is just a clipping in a scrapbook; it may have been Comfort or Hearth & Home magazine. We know the pattern best as an album block. (BlockBase #2881). 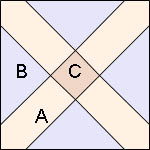 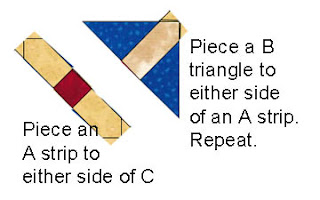 Sew the corner strips to the center strips.
Trim the corners.
This album block (or Kentucky Crossroads) is an authentic pre-Civil-War pattern.
The detail below contains blocks dated 1847. 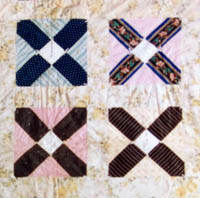 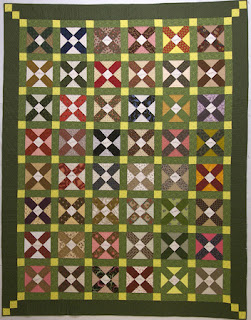 Another great block with nice historical information. I am making them as 10 inch blocks and plan 2 5x6 block quilts with 4 corner star blocks. Hope they will be finished by April to enter in a local show. My quilt guild the
"Hampden Quilting Sisters" made a soldiers cot quilt reproduction using the uneven 9 patch block and authentic reproduction fabrics when possible. It will be displayed and then donated to the The Noble & Cooley Center for Historic Preservation (NCCHP) museum at the drum factory in Granville, MA. Civil war drums were made in this building and reproductions are still made here.

One of my favorite blocks! I love the two examples you put at the bottom, too.

I love how this block makes up into a full quilt. Very nice.
Great post. Thanks for all your hard work giving us this info.
Deborah

Cool block, like many I only knew it by being an album block.
My parents lived in Marion, Kentucky for about 3 years back in the late 80's in large 2 story home built by a riverboat captain 5years before the start of the civil war.It was always referred to in town as the boat house. That is were our families love of all things Civil War started.
I think I will have to make this as a tribute quilt to my Great, Great Grandfather Jared Cobb that fought for the Union as a young man throughout the entire war.

Quilts along with a little history, well done. Richard

Great block and history lesson. I have completed my block and posted it on my blog along with a how-to.

I just found your blog and would love to make these blocks!! Is there anyway I could get the emails?? I know it would be a pain and am really sorry!! I did subscribe to follow the rest of them, but is there any way I can get all of them?? Thanks!!!

Hi! Greetings from Finland! Your Blog is FANTASTIC! Very happy to find a question about an icon. My profession was an iconpaiter, but I am sorry I can't answer. I haven't paint this icon. Now I am also a quilter. My mother is quilter.

Are you going to paint this icon or made a quilt. I am very interested! I have to come to see your Blog again!!! Please, go to see my mother's blog!

I will be your frequent visitor, that's for sure. pain relief Read a useful article about tramadol tramadol