Jessie Benton Frémont
Their marriage was a political partnership, an idea ahead of its time. Jessie's father was an important Senator, so she had many influential friends and relatives. John was known for his western explorations, for his Presidential run as the first Republican candidate in 1856 and for his arrogance in the face of authority.
Frémont was a western explorer and
a founder of the state of California
During the summer of 1861 General Frémont  became commander of the Union Army in Missouri, a difficult job in a state torn by conflicting loyalties. On August 30th he declared martial law, describing Missouri as disorganized and infested by murderers and marauders under a helpless civil authority,  He stated that armed rebels would be court-martialed, shot and their property confiscated. Furthermore, their slaves "are hereby declared freemen." 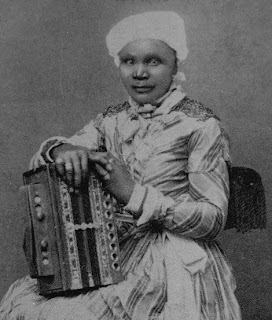 Most Missouri slaves like Winnie, whose portrait was recorded
during the WPA projects, remained in slavery throughout the war.
Frémont 's Missouri emancipation proclamation displeased President Lincoln. The Commander-in-Chief sent a letter by special messenger on September 2nd, warning Frémont that "liberating slaves of traitorous owners will alarm our Southern Union friends and turn them against us." The idea of confiscated slaves as "contraband" was one thing, confiscated slaves as free men another.

Frémont  publicly refused to rescind his order. Jessie went to Washington to argue their case for emancipation with Lincoln. She later wrote of their encounter, recounting her argument that Frémont's move would win the Union international friends.


"The President said 'You are quite a female politician.' I felt the sneering tone and saw there was a foregone decision against all listening. Then the President spoke more rapidly and unrestrainedly: 'The General ought not to have done it... the General should never have dragged the negro into the war. It is a war for a great national object and the negro has nothing to do with it.' "

Lincoln recalled the testy meeting for his secretary.

“She sought an audience with me at midnight and taxed me so violently with many things that I had to exercise all the awkward tact I have to avoid quarreling with her."

Jessie was remarkably out of place, a wife deputized to discuss policy with the President. The meeting went badly and so did Frémont's subsequent career. Lincoln removed him from the Missouri command in November. The War remained an official fight for the Union, not a fight against slavery....for the time being.

In this cartoon a pouting John C. Frémont holding an African-American doll sports a head wound inscribed "Lincoln."  The Doctor tells a worried Mrs. Columbia that it's only "a case of Sore Head."

Star of the West (#1128 in BlockBase) is an old block with many other names, among them Clay's Choice and Harry's Star. Both names, according to Ruth Finley in her 1929 book, were tributes to Henry Clay, an earlier politician who also ran unsuccessfully for President.
Cutting an 8" Finished Block
A Cut 8 background squares 2-1/2".
B Cut 4 medium, 2 dark and 2  background squares 2-7/8". Cut each in half diagonally
.

You need 8 medium, 4 dark and 4 background triangles.
The Frémonts returned to California where
Jessie was photographed on her porch
at Fort Mason in San Francisco.
Read more about the Frémonts and events of the summer and fall of 1861 at this blog post:
http://www.mrlincolnswhitehouse.org/inside.asp?ID=714&subjectID=2

Love the history. I'm assuming that Fremont California was probably named that in honor of the General! Very pretty block.

Charming story, lovely post. Thanks for the history lesson!

Fascinating story. Can't wait to make this block and share the history. Thank you!

All of these stories are just fascinating!

Great story - very pretty block. I completed my block and have posted it along with a how-to on my blog.

Beautiful blog. I just discovered it and look forward to exploring it further. The mixture of material culture, historic photographs and historical narrative is captivating.

Maybe you will want to add a facebook button to your blog. I just marked down the site, however I must complete this manually. Simply my $.02 :)

That's not the only place Fremont stuck his neck out. He's a character.

What a great story! Thank you.
I love this block.