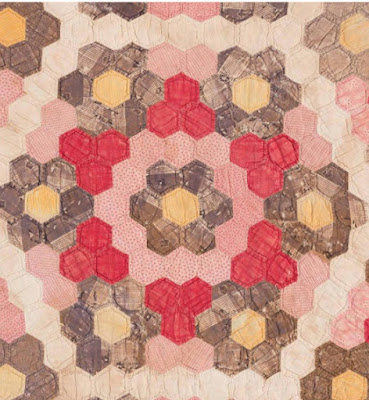 Quilt begun when Sarah Winifred Cobb Phelps (1842-1917)
was about 8 years old in 1850, Kentucky.
Colonial Williamsburg is showing this recent acquisition in a new exhibit The Art of the Quilter in their Abby Aldrich Rockefeller Folk Art Museum, a 3-year rotation of 12 quilts each year from the collection.
https://www.colonialwilliamsburg.org/explore/art-museums/current-exhibitions/art-of-the-quilter/ 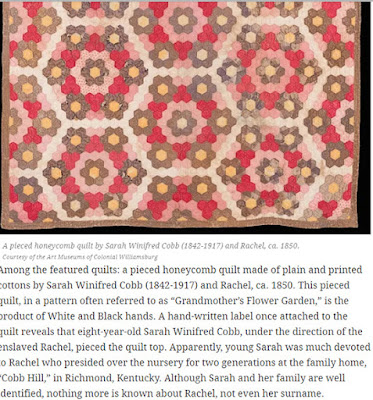 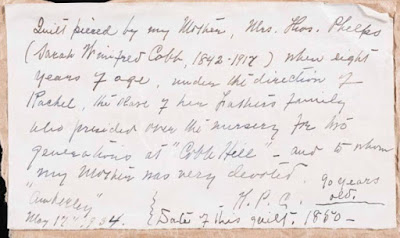 "Quilt pieced by my Mother, Mrs. Thos. Phelps (Sarah Winifred Cobb, 1842-1917) when eight years of age, under the direction of Rachel, the slave of her father's family who presided over the nursery for two generations at 'Cobb Hill' - and to whom my mother was very devoted. 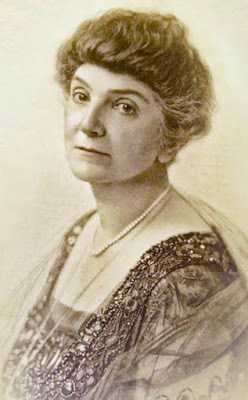 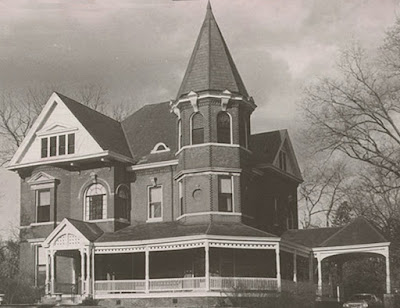 Amberley, Katherine's last Richmond home, still stands on Main Street.
Sarah Cobb Phelps's memory of Rachel was recorded by Katherine on "March 29, 1917 in her room at 'Blair Park', age 74 years and 3 months...when reminiscing as elderly people are want to do."

"Among the slaves inherited by my father was Aunt Rachel, who had been brought out from North Carolina by Jesse Cobb, Sr., having belonged to his family there. Aunt Rachel nursed all of the children of Jesse Cobb and his wife, Edith Oldham, including my father Richard Cobb, Sr., the youngest. She kept house for my father at Cobb Hill from the death of his father and mother in 1836, until his marriage in 1842, and lived to nurse all of his children, except the last." 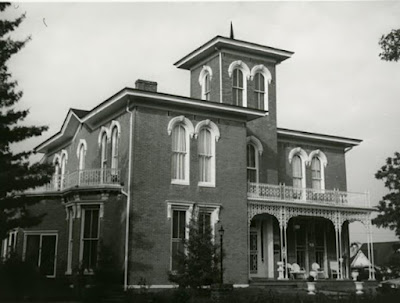 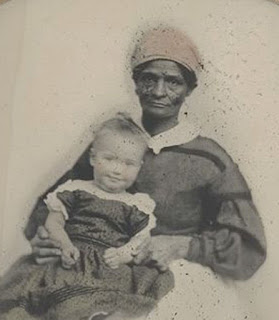 Did Rachel ever pose with one of her charges
like this anonymous woman? 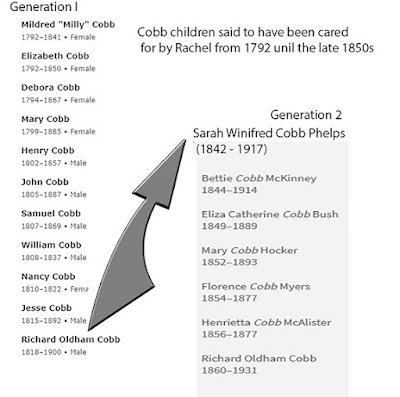 That last child, the one who missed out on Rachel's care, must be Richard Oldham Cobb II born in 1860. Seventy years of child care! Enslaved girls were often set to caring for children when they were children themselves. We might guess she began with twins (?) Milly & Elizabeth born in 1792 so Rachel could have been born about 1780 and died in the late 1850s when Sarah was an adolescent and the last girl Henrietta a baby. 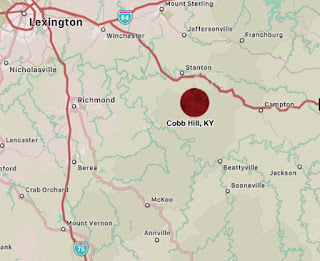 Rachel also was recalled as housekeeper in the 1830s and '40s at Cobb Hill while the the senior Richard Cobb's orphaned children were growing, going out on their own and raising their own children at Cobb Hill. As Rachel aged she went to live with a daughter in Estill County after the house was sold. She died at her daughter's, probably in the 1850s. 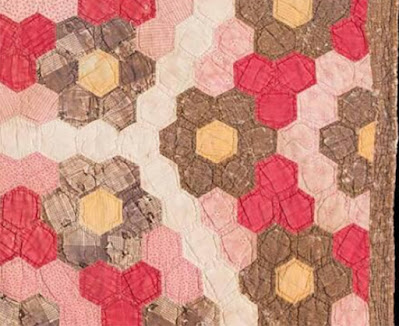 The well-worn quilt is pieced of several cottons an 8-year-old girl like Sarah
might have worn in the 1840s' and '50s. Was that brownish plaid once a pretty lilac? 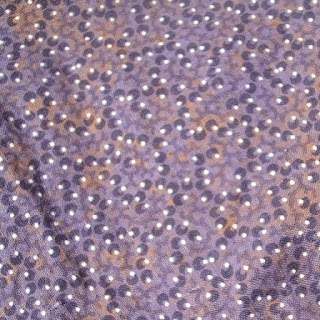 Those inexpensive purples were prone to turn tan over time.
Posted by Barbara Brackman at 6:00 AM

In my reading I have seen that slaves often took the master's sir name when they were freed. I have no clue how many of them percentage wise were actually also the master's children through rape of various female slaves.