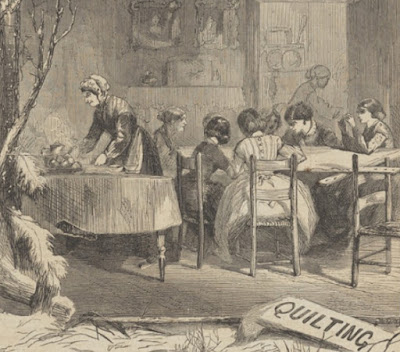 Soon after the Civil War began the women of Franklin, Massachusetts had a three-day quilting party at the town hall to supply 56 bedquilts for soldiers.

Main Street
The news about 75 women participating in a marathon quilting made it to New York. 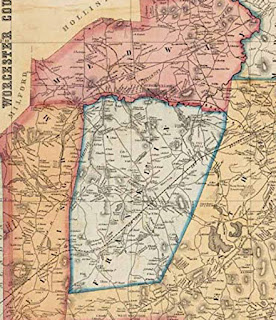 Franklin in Norfolk County
Franklin seems a rather unassuming town, after the war home to many industries.

Franklin in 1888
Franklin's marathon was not the only patriotic quilting bee in the first months of the war. Louisa May Alcott wrote of a larger event on May 1, 1861 in Concord, Massachusetts. In her journal summarizing events in the first month of the war:

"Spent our May-day working for our men, three hundred women all sewing together at the hall for two days." 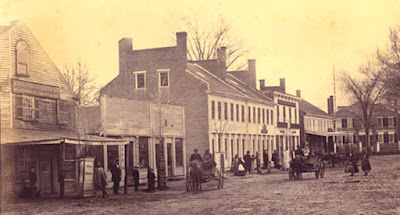 Concord in 1865
She did not say what they were sewing but we can assume the women stitched clothing with maybe a quilting frame or two set up.
Posted by Barbara Brackman at 6:00 AM

Kindred spirits.. I would one of them.

It would be wonderful if they had one of those new fangled sewing machines or two to help.