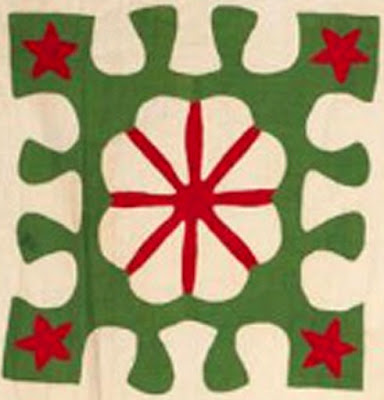 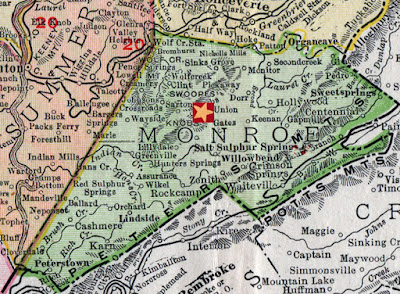 Did Harriet's five-pointed stars indicate a sentiment for the Union? After all she lived
in the town of Union, Virginia all her life (Well, without her actually packing a thing she relocated to West Virginia in 1863---whether she liked it or not.) 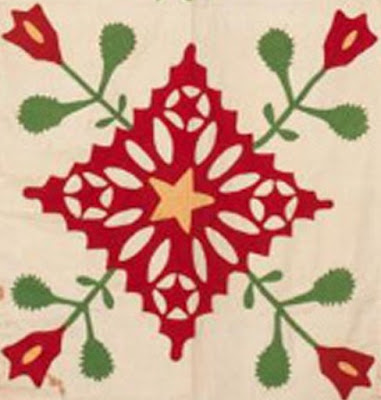 Chrome orange areas are revealed through reverse applique.
(See more at this post last week )
https://civilwarquilts.blogspot.com/2020/11/harriet-alexander-capertons-sampler-1.html
To examine Harriet's quilt and her life we have to begin with West Virginia's political history. When she was about 40 years old the Civil War broke out and the state of Virginia seceded to become a Confederate state. 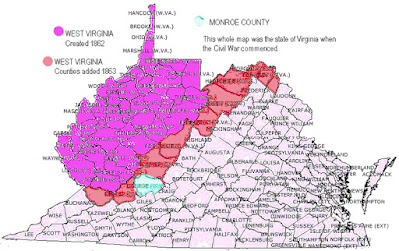 Virginia had once been much larger extending from the Atlantic on the east into the western Appalachian mountains, but generations of ceding territory to form other states had created this strange 1860 shape, home to many different cultures. The purple counties in the northwest were far more loyal to the Union than the eastern and southern counties in pink. And then there was the mixed strip in red in the center. Harriet lived in the blue county on the line between some strong opinions. In 1863 western Virginia split off from the "Old Dominion" to become the 35th state, a Union state. 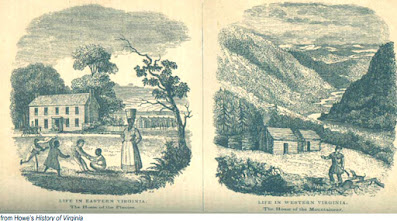 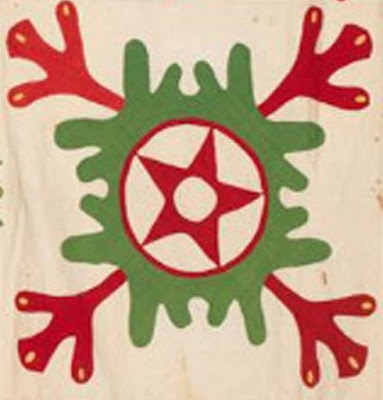 We do not know Harriet's opinions but my first reading of her album sampler was probably wrong. I looked at all these five-pointed stars, her town named Union and it's location in the break-away county as evidence of Union sympathies. I've changed my mind. First of all: Harriet's immediate family was anything but the stereotype of  "Mountaineer," although her grandfather James Alexander (1750-1814) could be viewed as a pioneer of the Revolutionary War era. 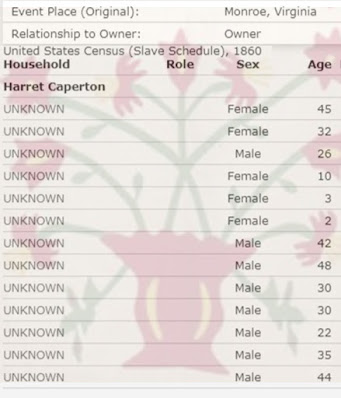 About the time of Harriet's applique she is listed
as owning 13 slaves in the 1860 census. Twenty percent of
the people in Monroe County were listed as enslaved that year.
It's doubtful Harriet had any Union sympathies.
A 1911 regional history tells us that James and wife Isabella Erskine Alexander's families intermarried with "other leading families of Monroe [County], the Alexander connection has been very prominent in local annals [Descendants became Senators, U.S. Representatives, Governors, etc and some quite wealthy.] Mother Isabella (1748-1834) was from Cecil County, Maryland; James from eastern Virginia, perhaps near Roanoke.
James Alexander and Isabella, in their twenties, were the first [non-Native people] to settle in Monroe County, created in 1799 from Greenbrier County. They'd been in Greenbrier prior to the Revolution's end and built that proverbial "first house" on a hill east of Union, a cabin soon burned in a battle with the native people. They rebuilt on what would become the town's main street and apparently James and Isabella ran a tavern and mapped a town.

Militia musters were important social events.
The name Union was chosen six decades before the Civil War to honor a mustering place of the neighborhood militias, The Union Militia.
Son Henry, Harriet's father, was the sixth of their 7 children. Harriet's mother Elizabeth Carthrae Alexander (1782-1829) was remembered in a local history as a gardener, raising the first geraniums and fuchsias ever seen in Union. 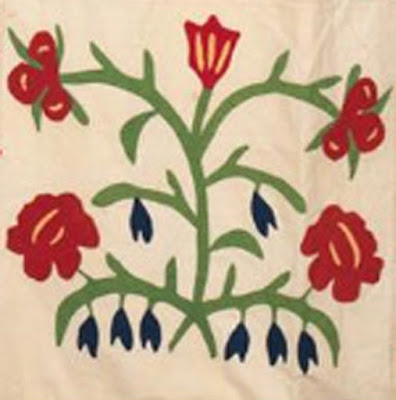 Harriet was born in 1820. Her mother died when she was nine. Perhaps she grew into one of the girls who shocked neighbor Anne Royall. Royall left observations about Monroe County in her 1826 book. She was unimpressed by Union: "This is a poor little village, remarkable for nothing but a very elegant brick court-house." 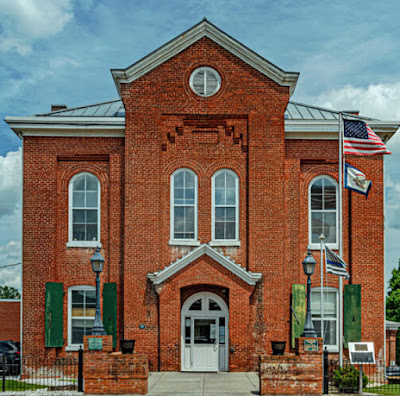 The brick courthouse in Union today is the third, built in the 1880s.
Royall noticed the wildness of the females who thought nothing of riding for miles around the country "sometimes attended only by another of their own age and sex! So much for the ladies of Monroe." 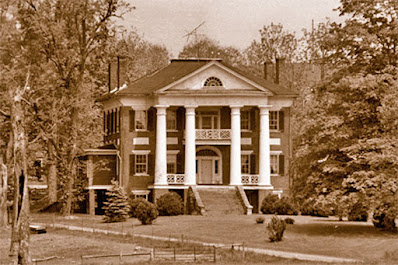 Elmwood Plantation survives in Union, on the National Register
of Historic Places
Early property owners thrived in the years before the Civil War, among them the Alexanders, who built increasingly grander homes that have not survived. Neighbor Hugh Caperton (1781-1847) is recalled as a Union resident who "became wealthy in land and the mercantile business [and] figured prominently in political affairs...."Elmwood. the Caperton family mansion, was built in Union in 1835.
Anne Royall thought Hugh Caperton remarkable although she did not mention him by name. "C___Esq. [has] amassed great wealth" as a merchant and speculator.

"An American, a Kentuckian (I think.)  He is descended from a respectable family...he is one of your finest looking men, of elegant address, and very handsome....Those who are so unfortunate as to fall in their debt, receive no mercy....The taste those people have for foreign finery, and foreign luxuries, roused them to industry....Meanwhile their children are springing up, already practice the arts of cunning and speculation." 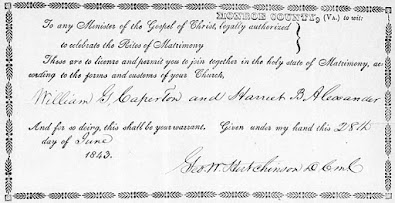 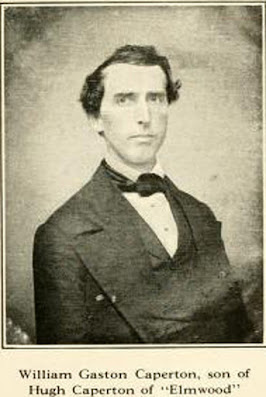 William Gaston Caperton (1815- 1852)
Gaston graduated from Yale in 1837,
married Harriette at 28. He was named
for Judge William Gaston of New Bern,
North Carolina.
Harriet was in her early 20s when she married in 1843. Her husband was probably called Gaston as were many of his descendant named for him. After perhaps a year spent practicing law in Staunton, Virginia the family returned to Union, due to his "failing health." 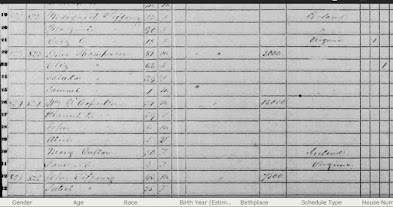 The 1850 census is hard to read. Harriette 29 is living with William G., three children and a 30 year-old Irish woman named Mary Cullan, perhaps in charge of the children. Gaston is worth $12,000 in land. By then Gaston was indeed in bad health. He dropped dead in front of Harriette at 37, leaving her with four surviving children aged 8 down to six-month old Isabelle. 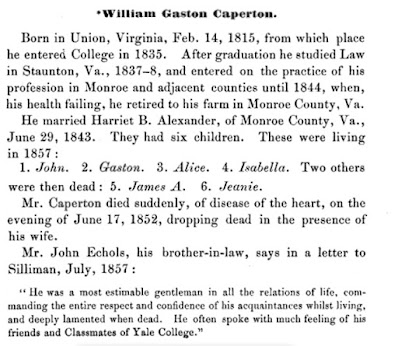 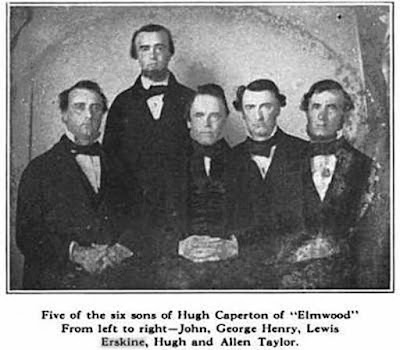 We have little more information about Gaston; he doesn't seem to have accomplished much in his 37 years. His prominent brothers are pictured here without him. Allen Taylor Caperton on the right was a post-Civil-War U.S. Senator. Gaston at this point may already have died but he always seems just out of the picture. "Failing health" and dropping dead are often indications of alcoholism, rarely acknowledged. 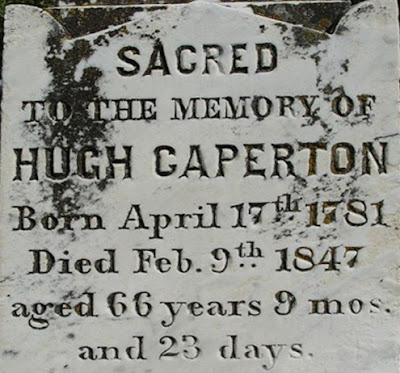 When Hugh Caperton died in 1847 he  left an elaborate will bequeathing much money, real estate and many enslaved people to his children. Harriette's husband did not receive what the others did: The enslaved Tuckwiller family and three other slaves listed by name, two horses and a cow. Gaston, married four years to Harriette, seems to have been much in debt to this father who enumerated, "advancements heretofore made to him, in all making about twenty thousand dollars."

Washington newspaper the Daily Republic printed an obituary,
not too accurate but heartfelt.
And that seems to be the end of Harriette's husband.

The 1860 census shows Harriet at 40 as head of her own household with her four children each worth more than she was (wealth probably measured in human beings).  Right before the Civil War eldest son John was 16. 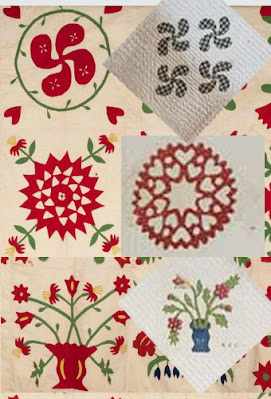 Harriet's blocks (on the left) have much in common with other antebellum applique quilts. On the right
blocks from a quilt dated 1848 made by the Robinson and Cather families, near Winchester, Virginia,
Collection of the Museum of the Shenandoah Valley. Harriet's on the left are similar but a little more high-spirited.
Next week the Caperton family during the war.
See Anne Royall's biting observations about her neighbors in Monroe County:  Sketches of History, Life and Manners in the United States.
https://www.google.com/books/edition/Sketches_of_History_Life_and_Manners_in/yERh6NxHR1sC?hl=en&gbpv=1&dq=Sketches+of+History,+Life+and+Manners+in+the+United+States.&printsec=frontcover
Posted by Barbara Brackman at 6:00 AM