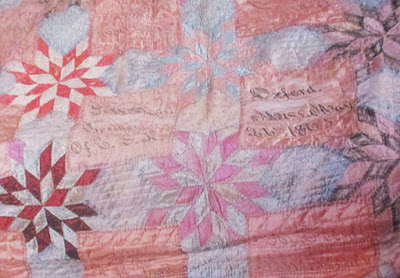 An unusual quilt, a star of silk satins with inscriptions: 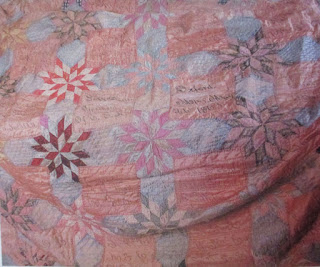 Forty-eight names are inscribed, many of them female members of the James Elihu Eades family. James Eades (born 1815) was a merchant in Oxford before the Civil War. 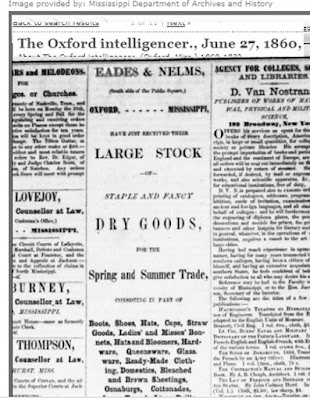 The Eades family was in the dry goods business,
Eades & Nelms being situated on Oxford's town square,
according to this 1860 ad. 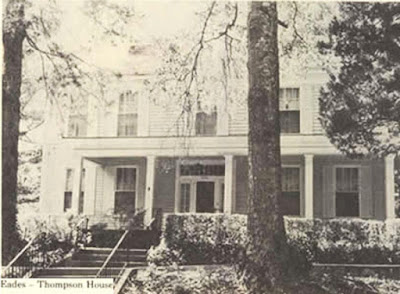 In 1858 James built this house that remains in Oxford at 1106 S. Lamar Boulevard

The quilt does fit typical fundraiser style with numerous names. Fundraisers are often raffled off. The Eades family wound up with the quilt, so may have won it or bought it. 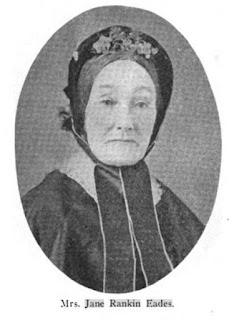 Jane Rankin Eades (1817-1906) from her D.A.R. obituary
Her father fought in the revolution so she was a "True Daughter"


In 1836 James E. Eades married Jane Rankin who was from Guilford, North Carolina, daughter of Robert Rankin and Mary Cusick Mebane. The Eades had twelve children, most of them girls, and many of them named on the quilt.

A. J.E. Eades of Mississippi is listed as a Confederate soldier, which may be father James who was 45 or so when the war began. James's fate is unknown as he is not listed as buried with the rest of the family in Oxford.

Mary Lohrenz, Curator of Stories Unfolded: Mississippi Quilts was kind enough to add some genealogical information in the comments:

*This son, James Oscar “Oscar” Eades, a clerk in his father’s store, served in the 11th MS Infantry, Co. G, Lamar Rifles, and was killed at the Battle of the Wilderness near Fredericksburg, VA, on May 6, 1864. I am not sure of exact death date of the husband of Jane Rankin Eades, but by 1870 census, she is widowed and 3 daughters and 2 sons are living with her in Oxford." 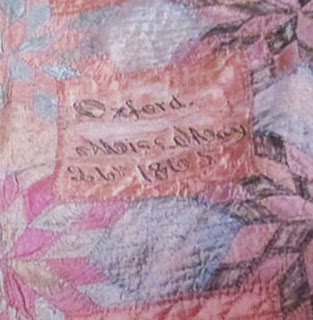 The date on the quilt is May 26, 1865 and one might assume that was the date the quilt was made, but May saw the closing weeks of the war. Lee had surrendered his armies. Davis was in jail. Oxford had burned six months earlier and one would guess all that silk would have been unobtainable. What was the significance of May 26, 1865 then? 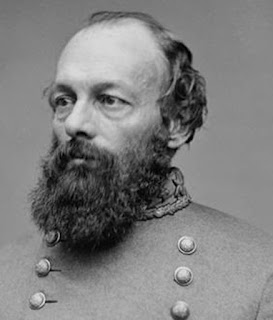 That was the date that Edmund Kirby Smith surrendered his Texas army of Confederates. Perhaps this last surrender was the true end of the war in the minds of the Oxford quiltmakers. Whatever the meaning it's unlikely to be the date the quilt was made. Although the style is atypical, one would guess it to have been made after 1870 and into the end of the century. The graphic style of the lettering is much more typical of the 1880s than the 1860s. The Eades girls named on the quilt, particularly Laura born in 1859 (about 6 in 1865), would have been more of an age to participate. Few of those girls married so their names remained the same and we get no clue to date there. 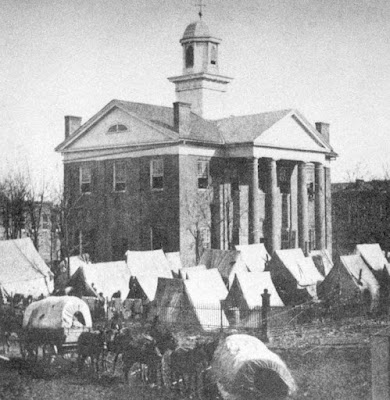 Grant's Army occupying Oxford in 1863 before the town and the
old courthouse burned.

The Eadeses seem to have lost their business, their home and their marital chances in the war. A measure of how far they'd fallen is a 1908 petition to Congress for a pension for Jane Rankin Eades, a public declaration of need that must have rankled.

Thank you, Barbara, for your informative post on this quilt! It is in the Museum Division collection of the Mississippi Department of Archives and History (accession #1997.26.1) and was included in the exhibit, “Stories Unfolded: Mississippi Quilts,” at the MDAH Two Mississippi Museums, Jackson, MS, Dec 2017 – Oct 2018. According to family tradition, this quilt, donated by Mr. and Mrs. William R. Eades, Jr. of Memphis, was made by Eades family members at their Oxford, MS home to honor Jefferson Davis and MS Confederate soldiers and may have been a fundraiser for Confederate veterans. I agree that this quilt was probably made in years after the Civil War and that the significance of its date of “May 26, 1865” is, according to the National Park Service Civil War timeline, when “General Simon Bolivar Buckner enters into terms of surrender of the Army of the Trans-Mississippi, which are agreed to on June 2, 1865. The Civil War officially ends.”
Kentucky native James E. Eades (b.1816) and North Carolina native Jane Rankin Eades (1817-1906) were married in 1836 in TN and settled in Oxford, Lafayette Co., MS. Oxford dry goods merchant, James Eades and wife, Jane, are listed in the 1860 census with 10 children as follows: 6 daughters, Mary (22), Sarah (18), Louisa (16), Hannah (15), Martha (12), Laura (1), and 4 sons, Oscar (20)*, Finis (9), Robert (7), and William (5). *This son, James Oscar “Oscar” Eades, a clerk in his father’s store, served in the 11th MS Infantry, Co. G, Lamar Rifles, and was killed at the Battle of the Wilderness near Fredericksburg, VA, on May 6, 1864. I am not sure of exact death date of the husband of Jane Rankin Eades, but by 1870 census, she is widowed and 3 daughters and 2 sons are living with her in Oxford. Jane Rankin Eades died August 11, 1906, in Oxford, and the Daughters of the American Revolution published a tribute to her in the April 1907 issue of “The American Monthly Magazine,” mourning the loss of one of their “Real Daughters.” Jane’s father, Robert Rankin (1756-1840), had served with North Carolina troops during the American Revolution. Her father’s Revolutionary War service and her financial need were no doubt the reasons a pension was requested on her behalf, via a private bill, in February 1905 (U.S. Congressional Record, 1905). Jane Rankin Eades and some, but not all, Eades family members are buried at Oxford Memorial Cemetery, Oxford, MS.
Mary Lohrenz, curator, Stories Unfolded: Mississippi Quilts

Thanks, Mary. I added the information. It is certainly an interesting quilt and the date is a puzzle that was fun to explore.