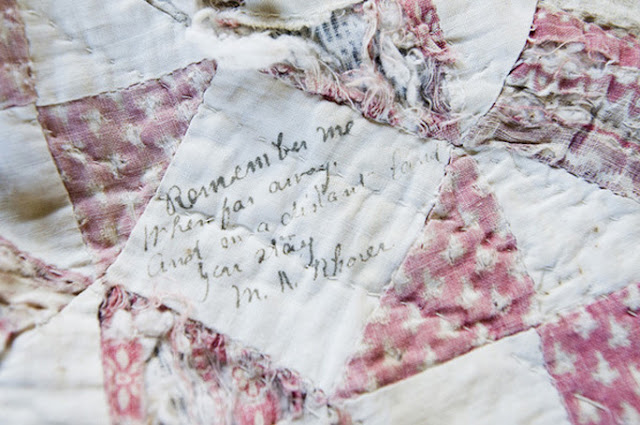 "Remember Me
When far away.
And in a distant land
You Stay
M.A. Rhorer" 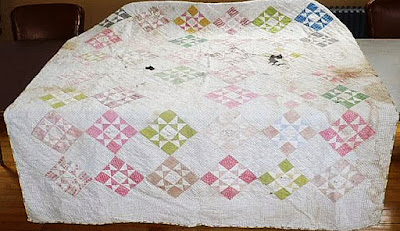 The quilt is thought to have been made about 1873-1874 when Elizabeth and Philip Pry moved from Keedysville in Washington County, Maryland to Tennessee in hopes of a new and more prosperous life. 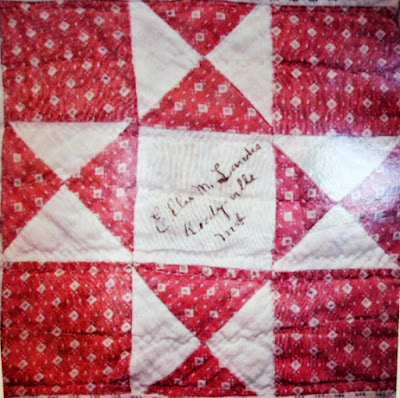 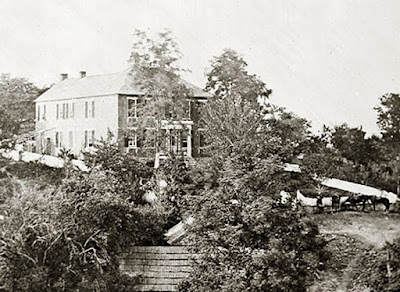 The Pry brothers married to the Cost sisters were once quite prosperous with Philip farming and and his brother Samuel operating a substantial grist mill where Little Antietam Creek met the Antietam. In September, 1862 a nightmare descended upon them in the form of opposing armies led by Generals George McClellan and Robert E. Lee. The Battle of Sharpsburg or Antietam was the single most murderous day during the war. 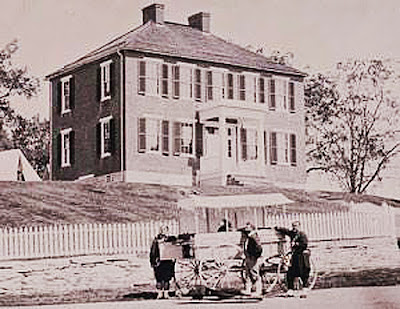 The Union Army commandeered their beautiful home for McCelland's headquarters and an officer's hospital under Dr. Jonathan Letterman, Medical Director of the Army of the Potomac. Enlisted men were treated in the barn.

"The whole town was a hospital," remembered a local woman:

"Some one suggested that yellow was the hospital color, and immediately everybody who could lay hands upon a yellow rag hoisted it over the house. ...and the fantastic little strips were soon flaunting their ineffectual remonstrance from every roof-tree and chimney." 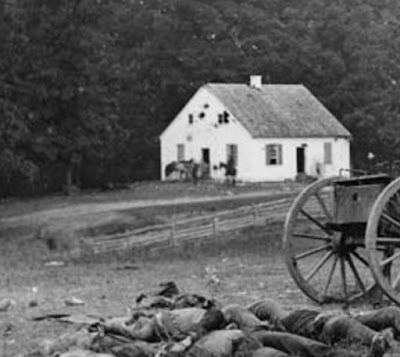 The Prys were members of the German Reformed Church, known
as the Dunker Church in the Gardner Photos. Bodies in the yard,
shell damage in the walls. 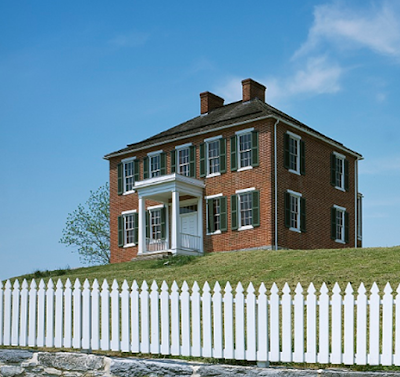 Photo by Carol Highsmith at the Library of Congress

Their house was saved although it was emptied of their belongings. It's now the
Pry House Field Hospital Museum near the Antietam Battlefield. 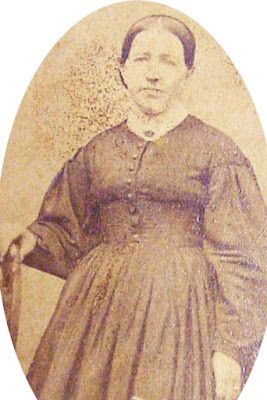 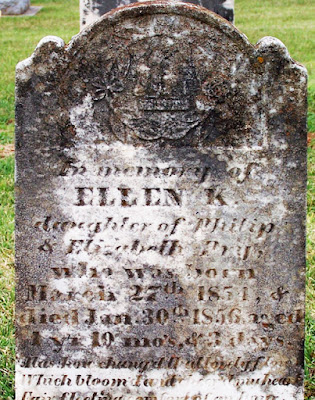 Daughter Ellen had died before her second birthday in 1856

An account of the damage from the National Museum of Civil War Medicine:


"The entire Second Corps camped on or near the property while General McClellan and his staff occupied the house. The army depleted the Pry’s food stores, slaughtered their livestock, burned their fences for fuel, used their hay and fodder and stole or damaged the family’s personal possessions. In addition, the Pry Barn housed between 400 and 700 injured soldiers from the Bloody Lane. Philip filed several claims for compensation from the government totaling over $9,000. He had to wait until November 27, 1865 for the first claim to be paid in the amount of $2,662.50. Two other claims were paid out seven years later in 1872, a full decade after the Battle of Antietam. In the end, the Prys received a total of $4,243.53. Unfortunately, the government deemed part of this to be overpayment and Philip Pry was forced to repay $1,209.38." 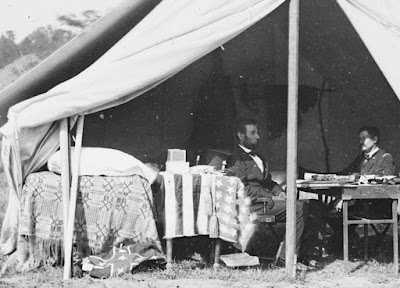 Lincoln visiting McClellan in his tent
On the up side--- the President came to visit wounded officers in their home.

The Prys never recovered financially. It must have been heart-wrenching to leave for Tennessee ten years later. Elizabeth's friends and relatives consoled as they could with the quilt blocks. 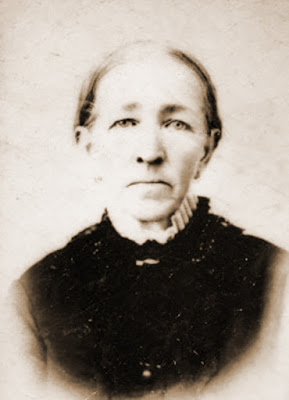 She lived in Tennessee for about ten years and when she died in 1884 she asked to be buried in the Fairview Cemetery back in Keedyville with her family.

Her star quilt's meaning seems to have been forgotten by a family who used it and used it up. 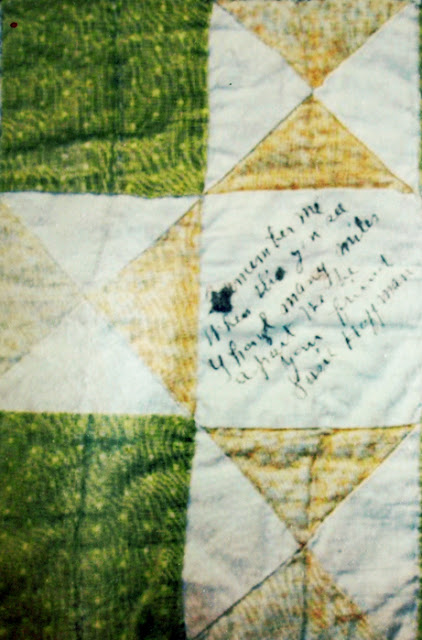 "Remember me
When this you see
Though many miles
Apart we be,
Your Friend
Susie Hoffman" 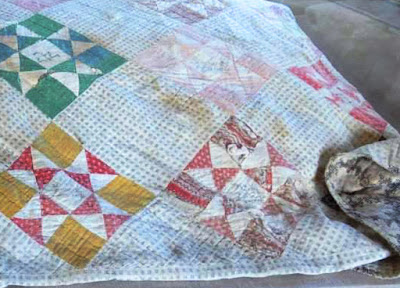 Baby Annie, born in 1861 inherited the quilt and it eventually wound up with relatives in Plainfield, New Jersey who sold the tattered thing at a garage sale to Maggy Sluyter. She determined to find out who signed the quilt.

Maggy learned the quilt's story and donated it to the Keedysville Historical Society in 1999. The quilt is occasionally shown at the Antietam Battlefield Museum in the Pry's house.

Susan Yano decided to make a reproduction of the worn quilt. She photographed each block, found accurate fabrics and pieced the top. 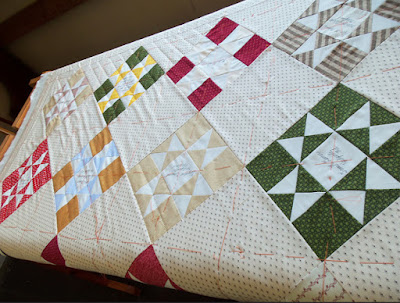 They sell a pattern for the replica to benefit the museum.

Hi Barbara. I'm Gladi Porsche and plan to join the HS quilt along. I just got the paper pattern. I asked to join the group on Facebook, but I don't have my own Facebook page so I have to do it through my husband's (Al) page. So when you see the request from Al Porsche to join the group I hope you will allow it!!! Thank you. I'm looking forward to this. Gladi

This was wonderful to read, thank you. So sad that the most memorable history is often the most boldies. You brought the human side to history. Thank you.

wow what a story,I love the civl war era, i can't imagine they sold this family quilt, i wish i had a family quilt. that is why i learned to quilt, self taught over 30 years ago.

A beautiful quilt to lighten the hardest of times. So sad, but a happy ending for the quilt itself - to be admired by so many.
My Aunt Becky's book arrived yesterday - about 2 weeks earlier than expected. I got a little excited! :D

My great grandfather fought in that battle. I may have to buy the pattern. A great story. Thank you!