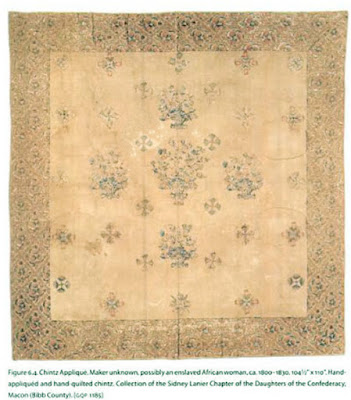 The Georgia project in their book Georgia Quilts published a photo of this chintz applique quilt
"Maker unknown, possibly an enlsaved African woman, ca 1800-1830 (104-1/2" x 110". Hand appliqued and hand quilted chintz. Collection of the Sidney Lanier Chapter of the Daughters of the Confederacy Macon (Bibb County)."

The photograph is indistinct but we can see it is a classic Southern-style chintz applique with a central vase surrounded by four smaller floral vases, a few appliqued motifs and a wide chintz border. 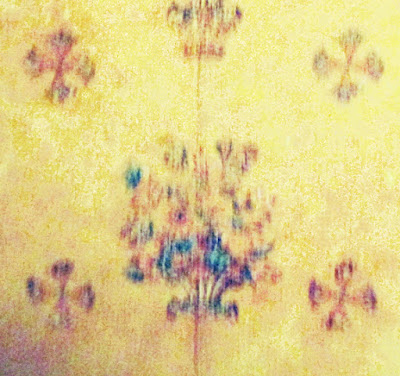 The smaller vases look to have been cut from a piece of chintz
rather than constructed. 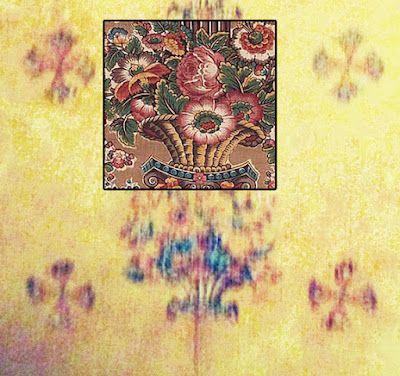 Perhaps this pillar print with a basket-like capital.... 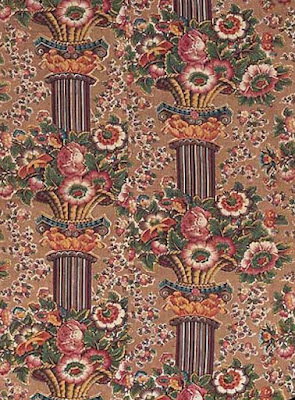 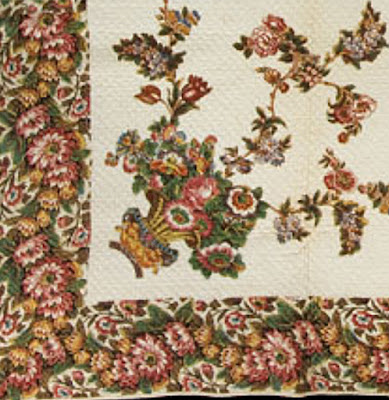 ...used as a floral container in the corners of a chintz
quilt in the collection of the International Quilt Study Center & Museum.
https://www.quiltstudy.org/quilt/20080400006 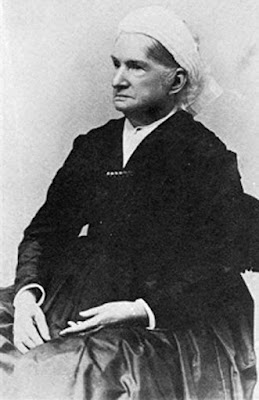 The quilt was passed on in Rebecca Wadley's family. Her genealogy is a bit confused as she was raised by a couple who may have been an aunt and uncle or a great aunt and uncle, Sarah and John Weber Barnard Everingham. John Everingham was a ship captain, a privateer during the War of 1812 whose ship the Saucy Jack sailed out of Charleston, South Carolina. They apparently also lived in Savannah, Georgia.

Anita Zaleski Weinraub in Georgia Quilts tells of a label stitched to the quilt's reverse, which indicates that Everingham bought an African woman in Charleston (probably before transporting Africans to the U.S. was outlawed in 1807.)  This unnamed woman became the household's skilled seamstress and she is thought to have stitched the quilt. It is thought of as a Georgia quilt. 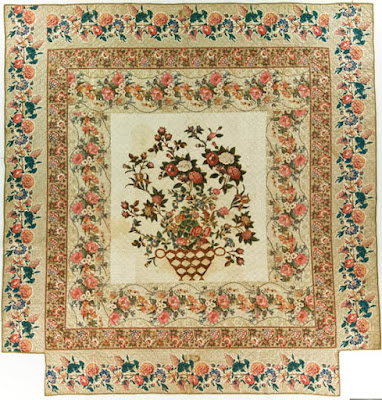 Quilt dated 1837 attributed to Susan Pritchard Kirkwood,
Charleston, South Carolina. IQSCM collection.
The majority of the date-inscribed chintz quilts in our files are from after 1830.

But newer thinking about these Charleston chintz quilts is that they tend to be from 1820 to 1850, which doesn't eliminate Sally, but we have seen so many similar Carolina quilts that we doubt the story of a home-made quilt. Families tend to think a talented great-grandmother stitched the chintz bedcovers or a family slave made them under her mistress's supervision. In our research into panel quilts from the Carolinas, Merikay Waldvogel and I have come to the conclusion that rather than being the product of individual families, the quilts were a luxury purchase, bought or commissioned at one or more workshops.

See our blog on just one topic here:
https://chintzpanelquilt.blogspot.com/ 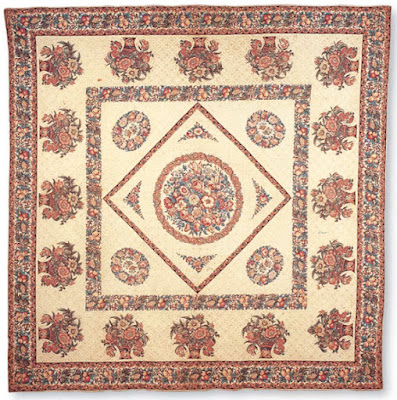 The source of the Wadley family quilt is open to argument but there is ample evidence it became the property of Rebecca Everingham Wadley, wife of post-Civil War railroad magnate William M. Wadley.

The label on the quilt's back goes on to say the elder Rebecca Everingham "gave the quilt to her great-niece Rebecca Wadley who gave it to her daughter Tracy Wadley in 1905."

Rebecca Wadley who died in 1905 had nine children, none of them named Tracy, but her son George Dole Wadley (1857-1930) married a woman named Georgia Eliza Tracy in 1883. They had two children: Sarah Lois Wadley (named for her aunt) and Edward Dorr Tracy Wadley. It's likely through this family that the quilt passed to Macon's Daughters of the Confederacy organization. Sarah L. Wadley Burt lived in Bolingbroke, Georgia near Macon on the family estate Great Hill Place. In 1947 she gave her aunt Sarah's papers to the University of North Carolina (the diary referred to in the last post.)

That Georgia estate, named for William M. Wadley's New Hampshire birthplace, was bought in 1873 as his retirement home, although he never seems to have retired. He was enormously successful in the railroad business and he also built and ran steamships as part of his Southern transportation network. 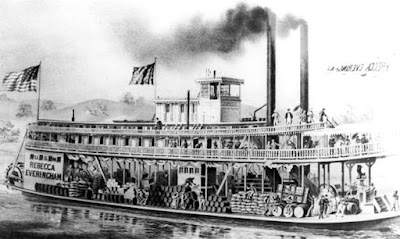 In 1880 he launched the Rebecca Everingham, named for his wife. 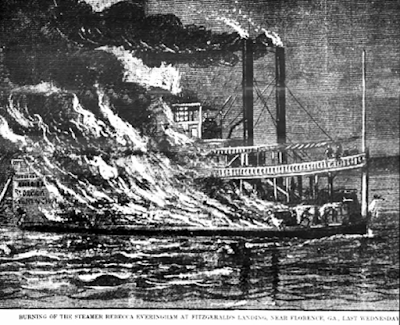 The Rebecca Everingham came to a sad end, blowing up near Florence, Alabama in 1884, killing many passengers and crew.

The real Rebecca Everingham lived a long life into the 20th century. We know her through daughter Sarah's diary but Rebecca kept one of her own, passed through her daughter Mary Milen Wadley Raoul to Emory University, which contains "a manuscript diary kept by Rebecca Barnard Everingham Wadley (Feb. 6, 1878 - May 4, 1881)." A diary by a rich Georgia woman about 60 years old may not be as eventful as daughter Sarah's Civil War diary but we can hope she kept up quilting and that she mentioned it.

The Everingham/Wadleys are certainly an interesting Southern family.
Posted by Barbara Brackman at 6:00 AM