Memorial Quilt for an Ohio Soldier 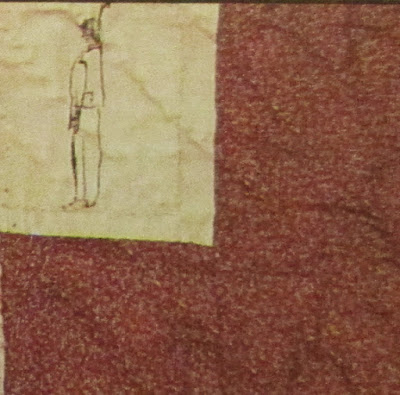 The Ohio quilt project documented a memorial quilt from
1869 with two mourning blocks lamenting the death
of Lewis A. Hulse. 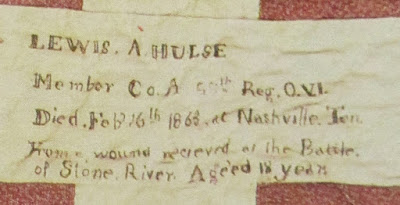 Lewis's older sister Loretta Emeline Hulse Ayers, known as Emme, is said to have pieced and inked the family record quilt. It seems she copied the text from his tombstone in Rose Hill Cemetery in Mason, Ohio. 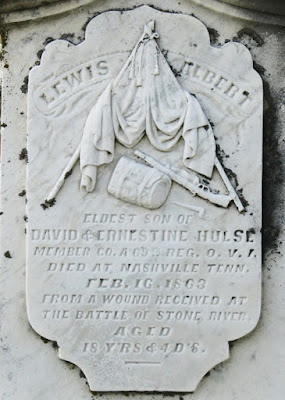 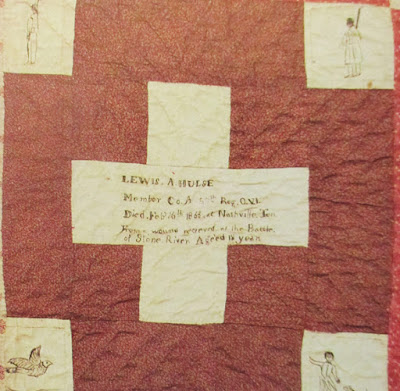 The quilt is discussed on pages 118 and 119 in the book
Quilts in Community: Ohio's Traditions 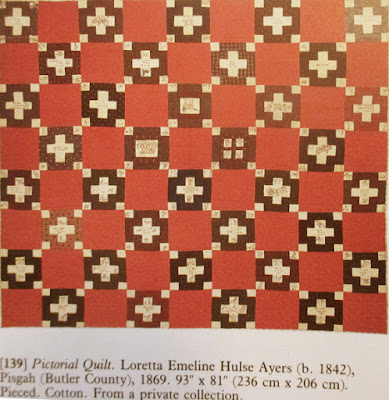 The Hulse family lived in Butler County, north of Cincinnati, Ohio on a farm near Pisgah.


A local history tells us about Lewis who was "born Feb 12, 1845. Energetic and patriotic, he enlisted Sep 1862, in the 69th Ohio Volunteer Infantry. At the battle of Stone River, the first battle he had an opportunity to be in, he was acting as a scout. On the morning of Dec 31 he was shot down, although living until Feb 16, 1863."

The Battle of Stones River [the current Tennessee spelling] is also known as the Second Battle of Murfreesboro and took place between December 31, 1862 and January 2, 1863. 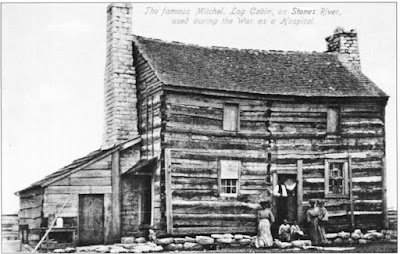 Lewis appears to have been wounded in his leg, probably cared for in a makeshift hospital like this one pictured in a postcard from about 1910.

"During the late war, Pisgah furnished a score of men for the army, out of which a full dozen either were killed outright, died in hospital, or from the effects of the hardships and exposures of camp life soon after returning home. Lewis A. HULSE, son of David HULSE, was a mere lad when he shouldered his musket for the army. He was wounded at the battle of Stone River, and died in camp."

Loretta Emeline Hulse was born September 7, 1842. She is buried in the same graveyard (with a misspelled record on Find-A-Grave.) She married James Ayers and had at least one son, dying at 51 years old in 1893. Her quilt is a memorial to her and her brother.

Such a sad story. What a good sister.

Such sacrifice of a young life - multiplied by thousands. . .

So young. I reproduced this quilt...like you are always telling us....in 2010. I saw it in a book but the story was not with it. Need to add to the label...if I only knew which kid had it! Thanks for the additional information.

That's a wonderful story.
A brave young man and a loving sister.
We're all family aren't we?