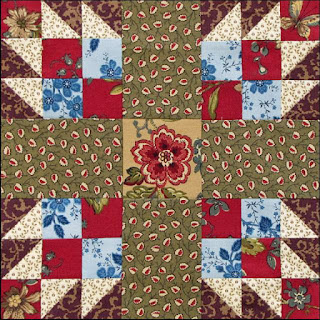 This month's block for our Westering Women sampler is a version of the traditional Bear’s Paw, chosen to remember trail landmarks Soda Springs and the Bear River. 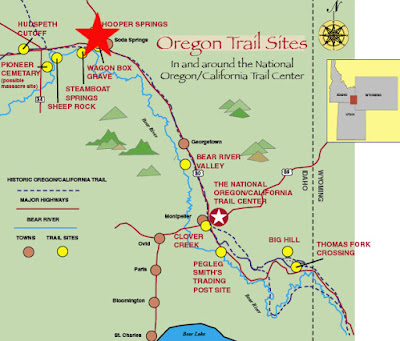 The red star is near Soda Springs in what is now Idaho.
Map: National Oregon/California Trail Center
http://www.oregontrailcenter.org/images/HiRes/Ore-Trail-in-and-aro.jpg

“ July 3, 1851. Travelled 20 miles. Had tolerable level road....Came to soda springs which are along the bank of the river. The water boils up from the bottom. Sparkles and tastes just as a glass of soda will, pure and cold. I never saw anything so splendid in all my life....It is thrown up by means of gass or something of the kind in the earth....There is a trading establishment here...was a chance to send letters to Fort Leavenworth on the [Missouri River]."  Amelia Hadley 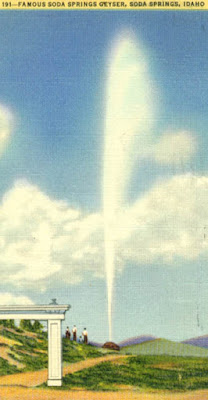 Geyser at Soda Springs,
mid-20th-century postcard
The geyser was accidentally created by drilling in 1937.
The springs used to bubble up in calmer fashion.

The mineral hot springs spewed saleratus, which could be used to leaven biscuits by producing gas in the dough like baking soda does. There’s a preserved soda spring 1-1/2 miles north of Soda Springs, Idaho.

"July, 1850
Reached the far-famed Soda Springs and Steamboat Spring at the big bend of the Bear River….[They] boil up from the ground in many places, forming mounds of earth with a little cup or hollow on the top…I dipped a cupful without leaving my seat in the wagon. Its taste was that of ordinary soda water. I learned afterwards from those who had used it that it made very light biscuit. We had no chance to give it a trial in this way."     Margaret Frink

Harriet Booth Griswold camped a day on the Bear River in August, 1859: "Did not travel today. Staid to shoe [horses] and recruit stock [probably purchase fresh horses or oxen from the traders there.] Been washing, picking over berries & steamed a nice dumpling for supper." 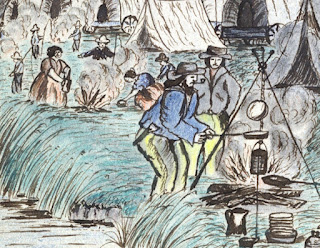 Detail of cooking on a riverside by Daniel Jenks, 1859

Rivers soon became scarce for the California bound who followed the Humboldt River until it disappeared into the desert and then on to the Truckee and American Rivers and the end of the trail. Those headed for Oregon followed the Snake River northwest. 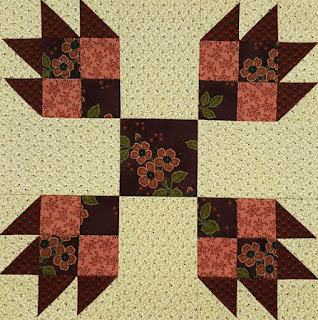 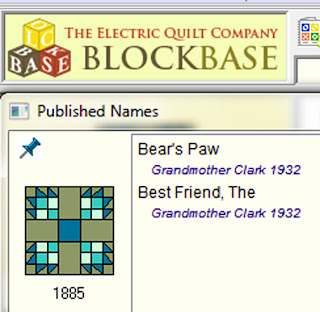 This Bear’s Paw with a Four Patch  (BlockBase #1885) is from the Grandmother Clark pattern catalog in 1932. She called it Bear's Paw or The Best Friend. The block can recall the geothermal sights along the Bear River. 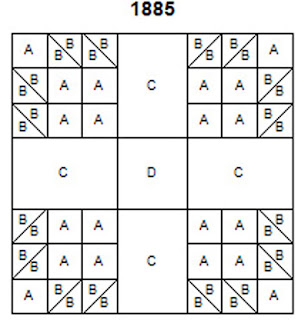 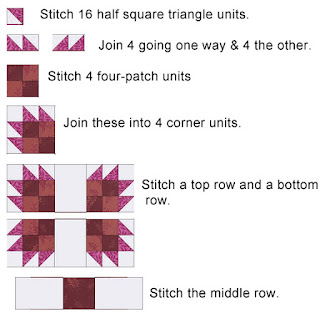 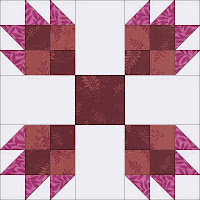 Becky, who lives in the Virginia countryside, made her block during a week with a Virginia bear encounter:


"The timing is perfect, because we had a bear in our back yard last night. We had thunder and lightning and I stepped out on the back porch to see if it was raining - and noticed that we'd had an intruder - the bear kind, 20 feet from our patio. Our bird feeder pole is completely down and twisted over and the bird feeder full of sunflower seeds was about 12 feet away. I'm pretty sure my stepping outside scared it away, since the feeder hadn't been smashed yet. I checked the trail camera this morning. . .wishful thinking on my part, but there is no video of him."


See Harriet Booth Griswold's diary in a preview of Covered Wagon Women, Volume 7: Diaries and Letters from the Western Trails, 1854-1860:

Amelia Hadley's 1851 diary is in Volume 3 of Covered Wagon Women. Read a preview here:
https://books.google.com/books?id=9W3ZSrJb1_8C&source=gbs_navlinks_s
Posted by Barbara Brackman at 6:00 AM

I live in the community of Big Bear Lake, so bear's paw blocks and bears are big here :)

Enjoyed seeing the difference between the two blocks color value wise. Realize I prefer the darker background. Yet I always piece with light backgrounds. Hmmmmm

I have always wanted to make a Bear's Paw block. Yes, the lighter and the darker backgrounds are both stunning. Now to decide which to do...

Love this block! Now I'm 3 months behind. Hope to catch up over the next month.

Another beautiful block and history behind it!
I'm going to piece the fabrics and assemble it! I opted for the one with lighter background.