Caroline Boston After the Civil War 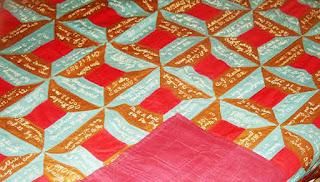 You may recall this signature quilt featuring the name of
Caroline Boston. 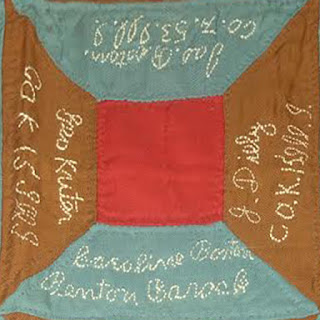 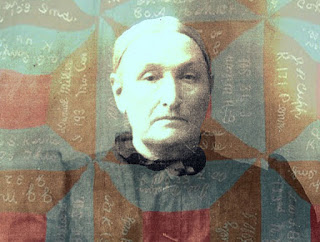 Her post-War story gives us a little insight into American life after the Civil War, a personal story illuminating a national history. The information here is gathered from her family's research and my own with help from Suzanne Antippas.

In the summer of 1864 James and Caroline Boston joined thousands of other Civil War veterans in homesteading land west of the Missouri River. They arrived in Pawnee County, Nebraska Territory, about a year after Abraham Lincoln signed the Homestead Act, which offered 160 acres to farmers who would settle on the land for five years. 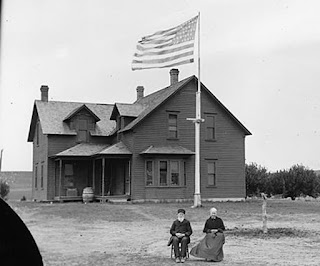 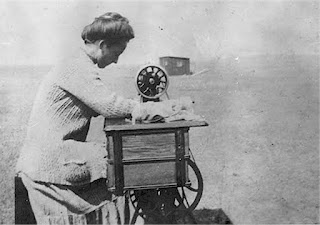 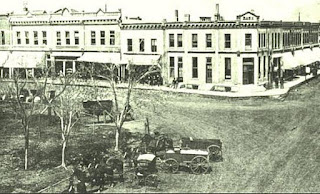 Pawnee City, Nebraska
The Bostons farmed near Pawnee City in eastern Nebraska for about thirty years.

Nebraskan Charles H. Morrill remembered the weather disasters in 1893 and 1894:

"Crops in Nebraska were almost totally destroyed by drought and hot winds.... Farmers were obliged to ship in grain and even hay to feed their stock; many sacrificed their live stock by selling at very low prices.....the entire state was almost in the grip of actual famine." 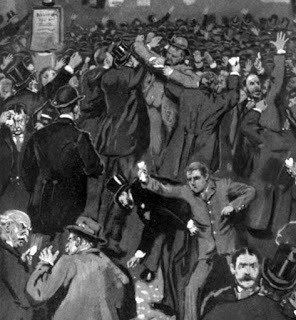 New York Stock Exchange in a panic in 1893...
a familiar scenario

As in the Depression of the 1930s, terrible weather and financial panics combined to create misery.

"In Lincoln [Nebraska] all banks with the exception of three went out of business or failed. Farmers could not pay interest on their mortgages; land could not be sold at any price; foreclosure of mortgages was the general order...the price of land fell to almost nothing....No one desired to purchase while almost everyone wished to sell."

The Bostons were early victims of the 1893 depression. Their farm was foreclosed and sold to pay their debts. The couple, each about 60 years old, moved west with their 8-year-old granddaughter Samantha Buswell to Smith County, Kansas in 1894. Several of their seven children were Kansas farmers in the area. 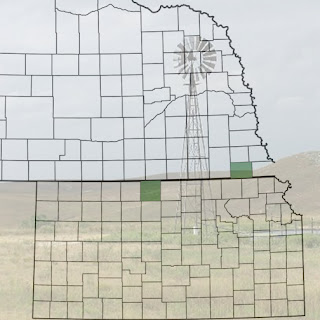 Smith County is the green square on the left, Pawnee County, the
rectangle on the right along the Kansas/Nebraska border.
The Bostons bought a farm in the Dewey community.

The financial and climate cycles of the 1890s inspired a good deal of social change. One was the passage of a Civil War veteran's pension for the disabled, signed by President Benjamin Harrison in 1890. The GAR had been lobbying for this pension for years. 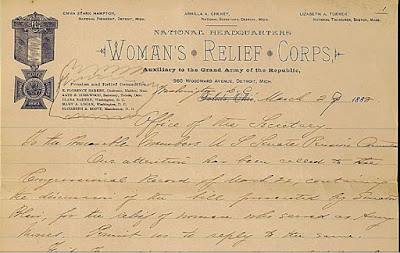 1888 Petition from the WRC requesting a pension for
Army nurses. Collection of the National Archives

The GAR's women's auxiliary, the Woman's Relief Corps, lobbied for a similar pension for army nurses, authorized in 1892.

As a former nurse experiencing financial need Caroline Boston soon applied for a pension. Her request was refused because of a lack of records. Six years later she re-applied, citing a clerical error in the first form and was awarded $12 a month. The money was paid retroactively from her first application which must have been a boon to the family.

The pension application required that Caroline attest that she was disabled and that she provide some record of her service. Her disability was cited as rheumatism and advanced age. Her husband was also disabled, having lost sight and hearing.

Her family still has an 1899 letter attesting to her service. George W. Knapp, a Justice of the Peace in Brook, Indiana, who'd been a Lieutenant in the 68th USCI, wrote:

"I became acquainted with Mrs. Boston, not intimately, about July or August 1863. As Ward Master she and others came under my immediate supervision and for this reason I cannot be mist(aken?)... for I entered Ward E as a very sick man in April 1863 and did not leave the ward until sometime in Feby. or March 1864 as already stated. My duties as Ward Master kept me busy all the time, and my relations with the Nurses were such that I can never forget them. They were very kind and attentive to the Patients always ready to perform their whole duty. To be more specific, I should Judge that Mrs Boston is now near sixty five years old." 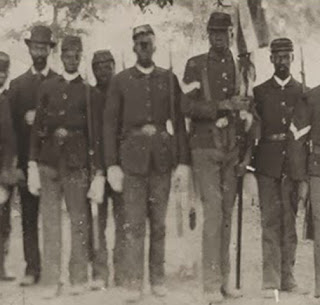 A reunion of the 57th Colored Infantry after the war.

The USCI was the United States Colored Infantry, founded at the Benton Barracks in the winter of 1863-4. 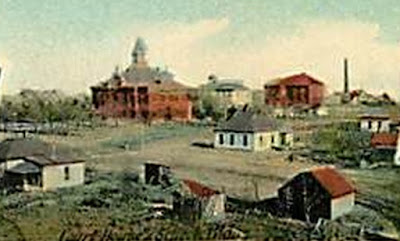 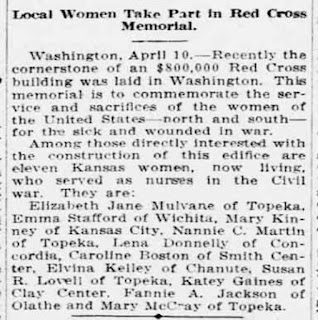 In 1915 veteran Caroline Boston of Smith Center was invited to attend the laying of the cornerstone of the Red Cross building in Washington. The Red Cross succeeded the Sanitary Commission as aides to military troops. 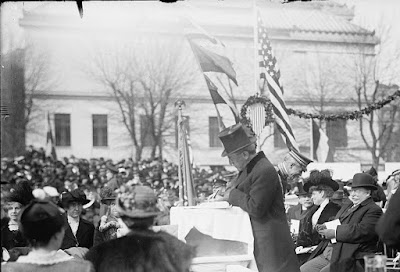 President Woodrow Wilson speaking at the ceremony in Washington.
Ex-President Taft sits at the right. Caroline Boston is somewhere in the crowd,
perhaps in an honored spot for Sanitary Commission nurses. 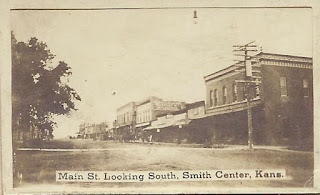 The Bostons remained in Smith County for the rest of their lives. Caroline Gerlach Boston died on February 3, 1922.  James Boston died in October 2, 1924. From his obituary:

"Uncle Jim Boston, for nearly a third of a century a highly respected and universally liked resident near Dewey, passed away, Thursday, at the advanced age of nearly ninety-one years. He was indeed a grand old man, always full of courage, optimism and love for his family and friends....Besides his children there are left to mourn seventeen grandchildren and twenty-four great grandchildren..."

Both James and Caroline are buried in Fairview Cemetery. 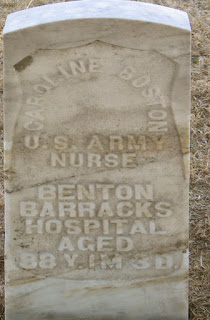 Another benefit that Nurse Boston qualified for
was a regulation army tombstone similar to her husband's. 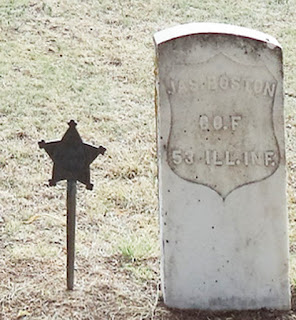 The family has a larger stone with a portrait of the couple
and a chip that tells their story to your phone. 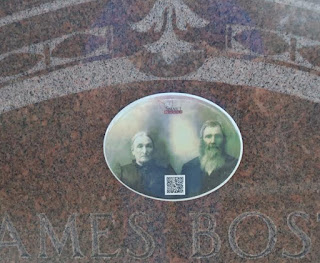 What a steadfast woman, and her husband. Thank you for posting this beautiful information.

Being from the South, we have heard so many life stories of people's lives after the Civil War. The courage to live in that era is beyond anything I can imagine.

Once again Barbara, thank you for your postings.
Smiles
JulieinTN

Thank you so very much for all you interesting research and writing! I so enjoy getting a glimpse of the past thru your work! Always look forward to your articles!
Kim in Virginia

This is fascinating! Where were you when I had to take history in school.