Bed-quilt Blank: A Bounder in Butternut 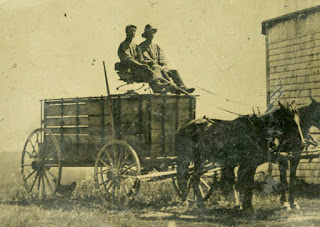 Here's a story that was published several times around 1900 about quilts and blankets being stolen during the Civil War,

"A citizen of Fayetteville, Ark., soon after the war, pointed out to a visitor on the public square, a man seated in a wagon drawn by a horse and a mule, accompanied by a woman who delivered the produce he had for sale. The man wore a brown jeans homespun coat, and the woman a homemade worsted skirt. 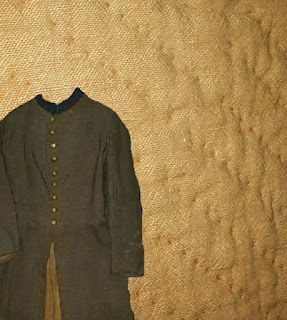 A brown jeans homespun coat might be any shade of brown
but probably a twill weave. The brown was often obtained
with white walnut dyes, called butternut.

"You see those people?" he asked of the visitor. "I used to think they were the salt of the earth; and their homemade woolens had a sanctity in my eyes as true emblems of honesty and innocence.

You can't judge a book by its cover,
or an honest family by its homespun.

"But during the war that man manifested his true nature, and but for the general amnesty, could be indicted for a dozen murders, for robbery, arson and larceny. He used to ride through the country and strip the beds of the poor women in these hills, until he piled quilts in his lap so high he could not see his horses' ears. They say the women shot at him, but the quilts proved a protection against their bullets. He is known as 'Bed-quilt Blank.' ''

Well it's too bad we don't know old Bed-quilt's real last name. What a scoundrel.

Read the book here at Google Books:
http://books.google.com/books?id=VZ9YAAAAMAAJ&pg=RA1-PA169&dq=confederate+quilt&hl=en&sa=X&ei=RA1eVJCTBenksAScqoLoAw&ved=0CDUQ6AEwAQ#v=onepage&q=confederate%20quilt&f=false
Posted by Barbara Brackman at 6:00 AM

Yet another use for my quilts. Who would have thought!

Well how interesting. Who would have thought of quilts being involved in committing crimes? Thank you for this bit of history :)

What was he going to do with the wagon load of quilts?

Looks like she used one of them for the bottom of her skirt.
Meanwhile I'll have to remember to keep a stack of my quilts handy next time I'm being shot at.

What a story! It makes me wonder all kinds of things! Like what did he do with so many quilts? Especially the ones with bullet holes in them!