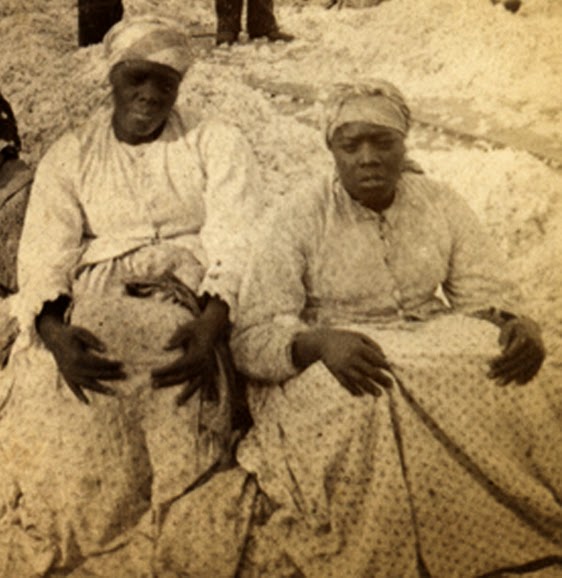 Enslaved women about 1861, detail.
Photo from the Robin Stanford collection, Library of Congress

The Library of Congress has recently acquired a collection of Civil War photos from collector Robin G. Stanford of Houston. The new Stanford Collection includes 540 images, many of which are rare stereograph photos showing the world of the slaves. The women above in their cotton print skirts have been cropped out of the corner of one photo picturing cotton workers. 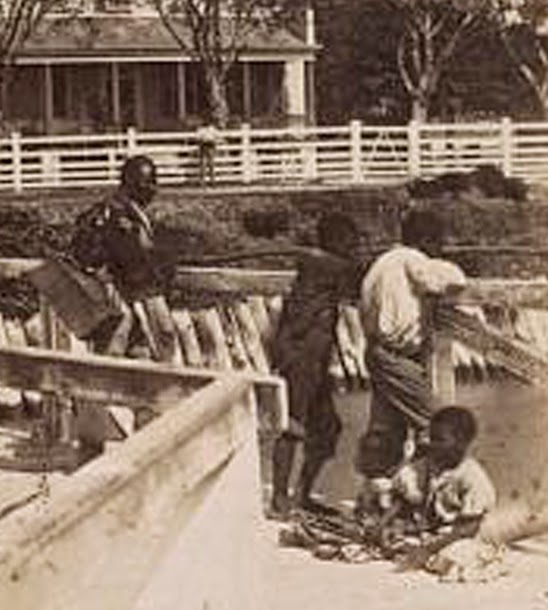 Detail of another photo of children

As of April 4th, 77 of the photos have been scanned and are available at this webpage:
http://www.loc.gov/pictures/search/?q=robin+stanford+collection&st=gallery
More scans will be available as work continues on the project. 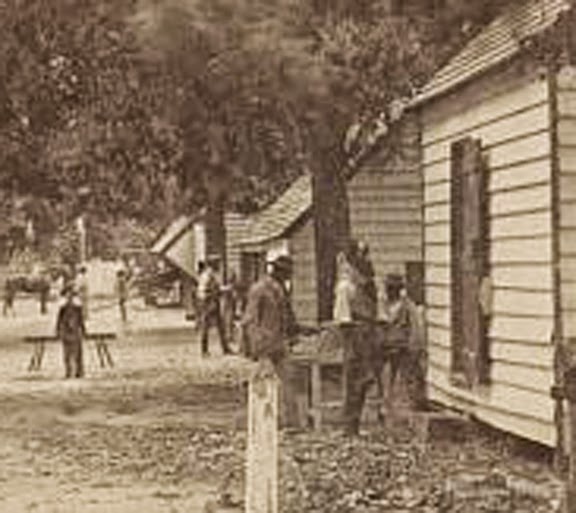 " 'I’m delighted that the Library of Congress has agreed to acquire my collection," said Stanford. "I feel that the Library is the perfect home for the images, an ultra-safe and secure place where they will be fully accessible, not only now, but for future generations to come.' " 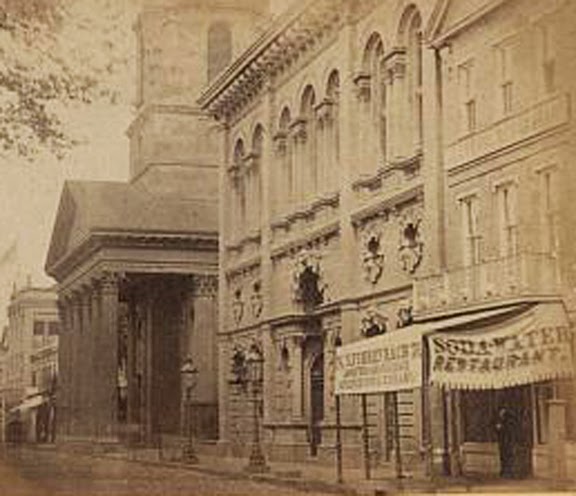 A view of Charleston during the war

The good news is that these photos will add immeasurably to our visual memory of the era.

The bad news is that the  Washington Post story announcing the purchase/gift is ridiculously sexist.
The headline:

The news story goes on to tells us "A Houston housewife, who quietly collected rare Civil War images for 50 years, sold more than 500 early photographs to the Library of Congress."

Until you read the last paragraph here you didn't know that Robin G. Stanford is a woman, and an older woman, a self-proclaimed "old lady." This is not important. What is important that she was a shrewd and knowledgeable collector.

To some degree we can fault reporter Michael E. Ruane for this old-fashioned, aw-shucks spin on the story. He included the line :

"On Friday, Stanford, wearing a blue cardigan sweater, black necklace and gold earrings, visited the library to show some of her pictures."

More guilt can be apportioned to the headline writer who characterized Stanford as a grandmother rather than an important collector. The caption writer who describes her as a Houston housewife should share in the blame. Where the heck was the editor?

Well, don't get me started but the next time I read a story about Mitt Romney in the Washington Post I want it headlined "Grandfather Gives Republicans Advice" and I want a line about what he's wearing.

I'll remind the Post:
Equal treatment is all we women want. 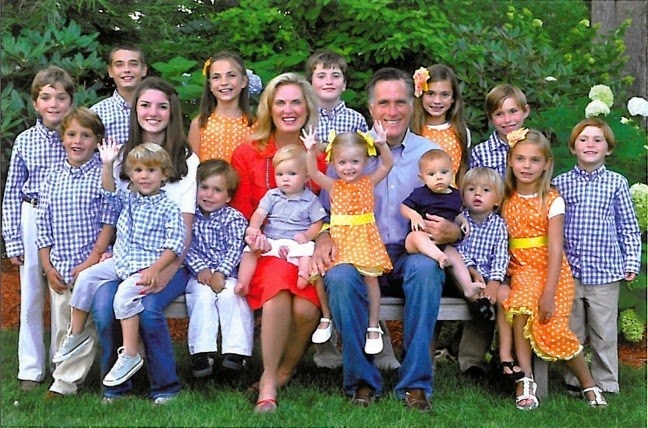 Mitt Romney, grandfather, was wearing a blue oxford cloth shirt
and a pair of blue jeans
when photographed with his family.

The Good News
Read a press release from the Library of Congress, which includes an interview with Sanford by clicking here:
http://www.loc.gov/today/pr/2015/15-051.html

Great post, Barbara!!!! The photos are definitely a treasure for all of us... Thank you Robin Stanford for preserving a piece of our history. Perhaps we should say "aging, gray-haired, grandfather Mitt Romney!

Thank you very much! A simple "she" would have sufficed by the author of this article.

Yes! I so agree! She was lucky they didnt also throw elderly in. That is a word that drives me crazy when describing age and not condition.

I wonder how it would have been written if she was younger, lol. Makes it sound like she did this to pass them on before she dies.

I am with you on this. Mitt Romney, in blue shirt... HAHAHA

Were the pictures stored in Mason jars behind the butter churn? Absolutely absurd take on the situation by the Post. Katherine Graham must be spinning in her grave. Disgraceful. I hope you communicated your thoughts to them directly.

Thanks so much for your wonderfully expressed 'bad news'. Straight to the point!

I thoroughly enjoy reading your posts about Civil War quilts. I've learned a great deal. This post, however, was brilliant! I also hope you've sent a note to the Post. Thank you for sharing this.

I look forward to your posts every week but normally don't chuckle. Love this one. I always wonder the same thing when someone 60+ has a car accident, they are always labeled a grandmother or grandfather. But, someone between 20-60 has no age specific adjective. Age discrimination towards those over 60? Well, it depends upon which side of 60 you are on I'm thinking. :-)

Thank you, thank you! The demeaning slights to women are ubiquitous still in contemporary writing. Your sharp satire of Romney is right on target.

Bravo! I agree wholeheartedly with you. It's 2015 already, can we stop this nonsense!

You are so spot on with your observations! This attitude is so pervasive that it even slips by us women at times.

Why did you choose the Romney family picture as an example? According to a recent Pew pole, the Washington Post, the source of the article you are criticizing, is a left of center, liberal publication, whereas Romeny is usually described as a conservative.

I think she did it just to show clothing comments..no politics intended.....!

Goodness gracious, me oh my, ya'll need to chill out a bit! I didn't see anything wrong with calling Mrs Stanford a grandmother!Her family and grandchildren were part of this story. Good writing skills call for descriptive information. It adds human interest to the story.I did not find the article "sexist" in the least. And bringing Mitt Romney into it....really?? Seems to me some folks are getting prickly over the wrong things.

Your caption on the Romney photo made me smile, because Mitt would be completely okay with that label and depiction. I completely understand what you are saying. Sexism is alive in America today. As I was reading your post, before I got to your comment at the bottom, I, too, thought, "When's the last time a man in a suit was described as wearing a pinstripe outfit complimented by a yellow shirt and red and white striped power tie." Or, "He was dressed in a business suit with gold and ebony cufflinks and a matching tie tack." LOL I suspect the truth is the reporter just didn't know what to do with Stanford because she didn't fit a mold he recognized. Yay for mold breakers!

I enjoyed reading your post. Perhaps the "grandmother" label was apropos since Mrs Stanford said she sold the stereographs to help pay for her grandchild's education. To me this made it relevant to the story. Sexism, ageism, racism and so many other isms are rampant in our society, it's true, but do we need to have a knee jerk reaction to every perceived slight?

Yup! One step forward, two steps back. Thanks for sharing!

Enjoyed your post much, and the comments almost as much. Keep on Barbara!

Barbara, thank you for your post. Right on point.

To those who protest Barbara's post is a picky knee jerk reaction I say that if no one points out such antiquated thinking, nothing ever changes. Protest is an honored and honorable fully American form effecting change.

To the young reporter who wrote the story I compare his attitude to that of S.Johnson: "Sir, a woman's preaching is like a dog's walking on his hind legs. It is not done well; but you are surprised to find it done at all." More than time that attitude saw the dust bin.

The age and sex matter because of how the person created the collection and WHY.

I agree with some of fusses about what she was wearing but I WANT to know that it was a woman and what age she was, the same as if it was a man and how old he was.

What they wore - not important. But who they are - yes, important to know.
A 25 year old woman who had such a collection would almost be suspect - where did it come from? An elderly woman tells me she is of my generation or older and would be interested and would have collected it over her lifetime. This tells me it was meaningful to her and she carefully entrusted it to the LOC.

Why did I chose Mitt Romney? Don't read too much into it. I was looking for a public figure who was a grandfather. He's the first recent national political figure who came up.