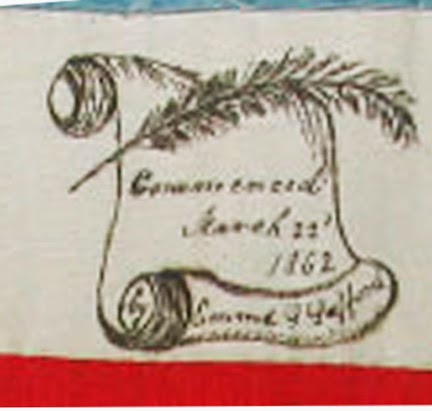 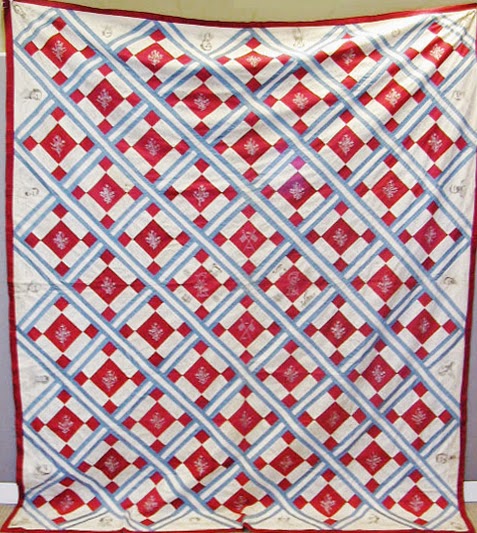 The great-great grandniece of Emma Safford inherited this quilt (it looks like an unquilted, bound coverlet) and has shown it in the past decade or so. 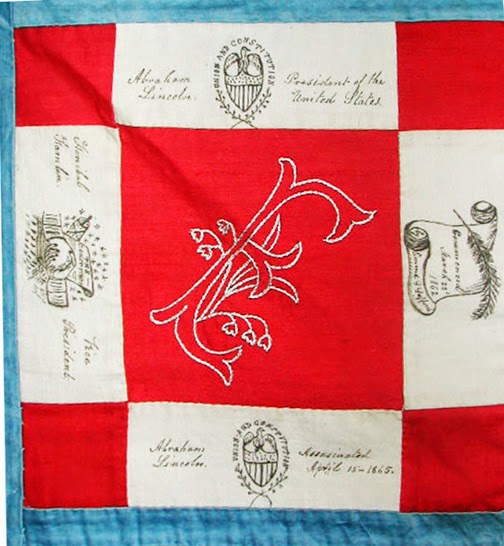 Each of the Turkey red and white blocks is inscribed
with an outline-embroidered initial E or S, or a pair of crossed flags.
In the white strips are inked inscriptions and drawings.
This block commemorates Abraham Lincoln and announces
the quilt was "Commenced March 22, 1862."

Articles about the quilt say that the inscriptions contain portraits of the first 16 (or more accurately---22) Presidents of the U.S. in the edge triangles. The quilt was probably finished before 1889 when 23rd President Benjamin Harrison took office. The 22nd and 24th President was Grover Cleveland. Each portrait is accompanied by the politician's birthday and date of election.

Other inscriptions recall major Civil War battles and items such as the 1862 national debt of $491 million dollars.

The quilt seems to have been begun during the Civil War, or at least the inked inscriptions on the white cotton were commenced in 1862. One can guess that Emma continued inking for decades. The fact that her initial E is embroidered in  flowery, outline fashion is a clue to a post-1880 date, however. This type of embroidery and patterns for such monograms tend to be after 1880. 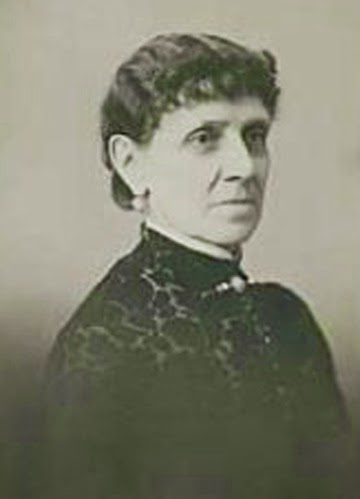 Photo of Emma Safford passed down with the quilt.

The family knew little about her. I found two possible candidates as quiltmaker.

And one from Illinois:
Emma Safford Pettit (1853-1928) born in Marengo Illinois, married in 1876 to Daniel Barton Pettit Jr. and buried in Belvidere Cemetery, Boone County, Illinois. She died at the home of her son in Columbia Falls, Montana.
http://files.usgwarchives.net/il/boone/cemeteries/bel0012s.txt

I'm betting on the Massachusetts woman, about 24 in 1862, rather than the Illinois Emma who was only 9 then.

http://www.sfgate.com/bayarea/article/Civil-War-history-unfolds-Family-s-heirloom-2825975.php#photo-2217934
Posted by Barbara Brackman at 6:00 AM

That photo looks like 1880-90's in style and the woman looks more like her age is in the 60 's rather than the 40's. Of course there could be more Emma Staffords out there. I also would find it odd for the quiltmaker not to use the "P" as an initial when making the quilt if she was married in 1876. Emma Stafford Petit would be low on my list of candidates for maker. If you are in contact with family, try building a family tree backwards from their known relatives. Include aunts as well as direct descendants. Just coming up with geographical locations between 1862 and 1900 would help. This post today might turn up something!

This is so lovely. Would love to inherit a quilt, any kind would be so nice. Thanks for sharing.