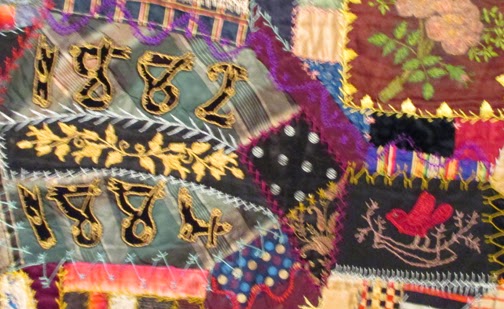 Dealer Julie Silber had an exceptional crazy quilt for
sale last week at the American Quilt Study Group meeting
in Milwaukee. It's dated 1882-1884. 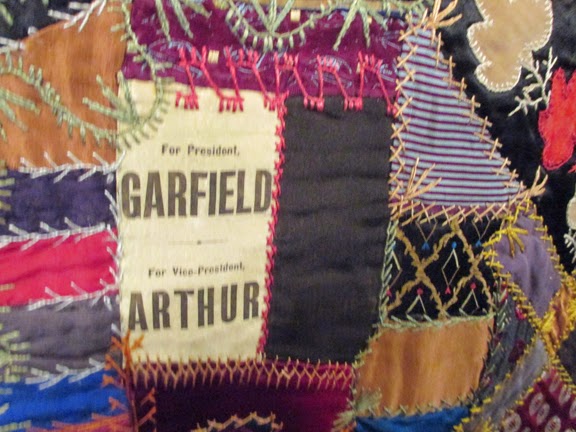 The seamstress included several political ribbons
such as a Garfield/Arthur ribbon from 1880.
By 1882 Arthur was President; Garfield had
died, a victim of a gunshot wound. 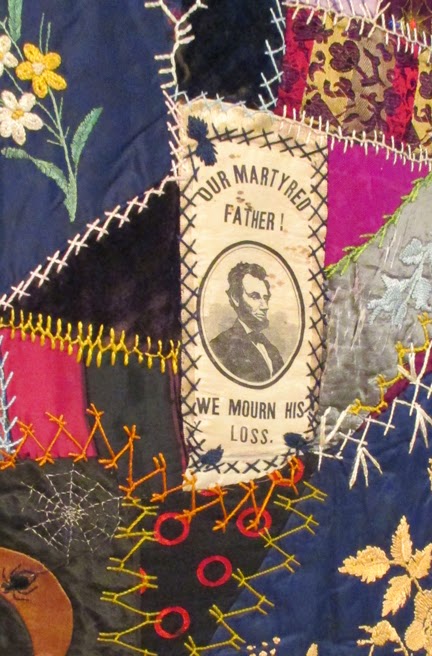 Another indication of mourning:
a ribbon with a portrait of President
Lincoln, "Our Martyred Father! We
Mourn His Loss." This looks like
silk but the only example I can find online
was paper. 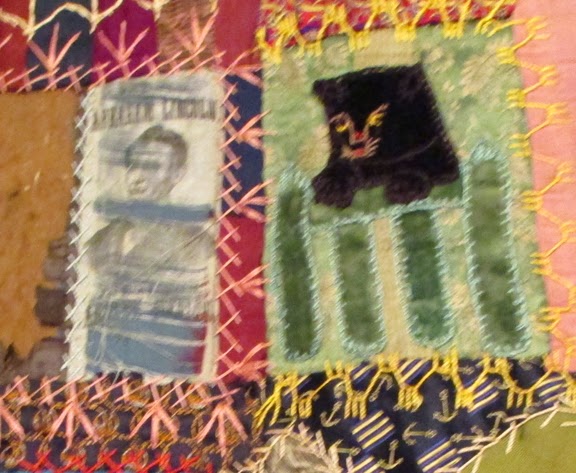 The most important ribbons were two from
Lincoln's presidential campaign. The blue
ribbon on the left is in poor condition (as is my photo)
but I recall it was from the Lincoln/Hamlin campaign
of 1860. 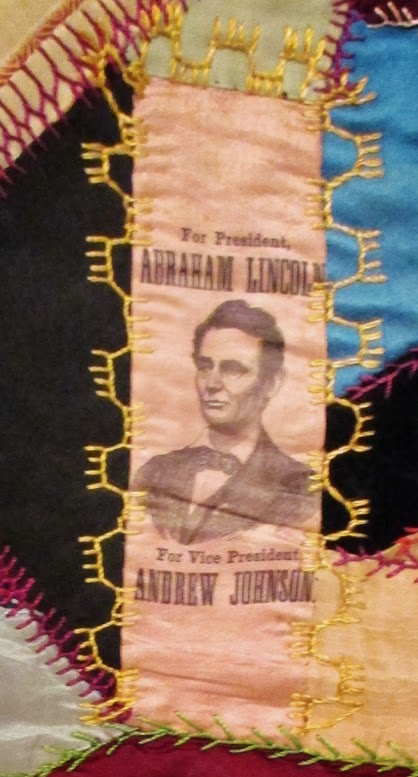 The 1864 Lincoln/Johnson campaign ribbon is in great shape. 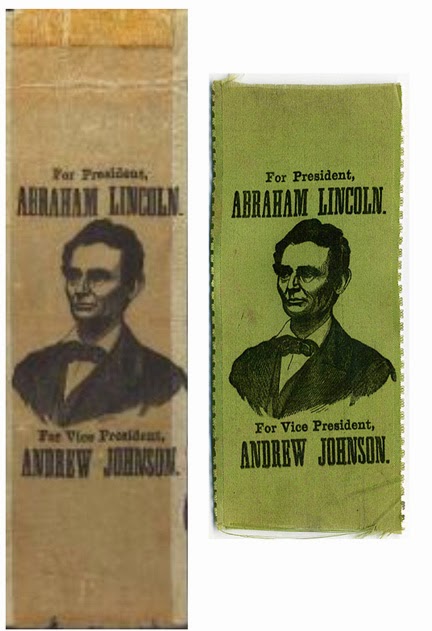 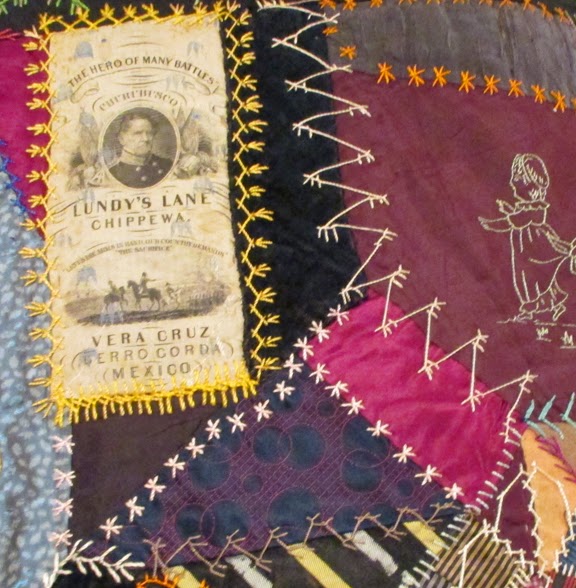 Here's a ribbon featuring Winfield Scott as
"Hero of Many Battles" from his failed 1852 campaign, 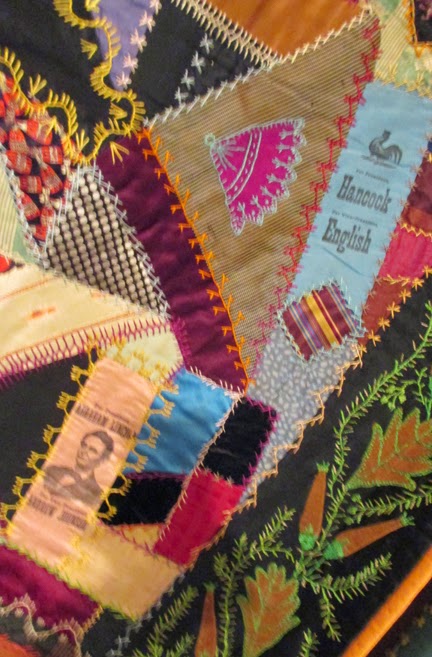 and one from the losing Winfield Scott Hancock/
William H. English ticket of 1880. The rooster
indicates they were Democrats. 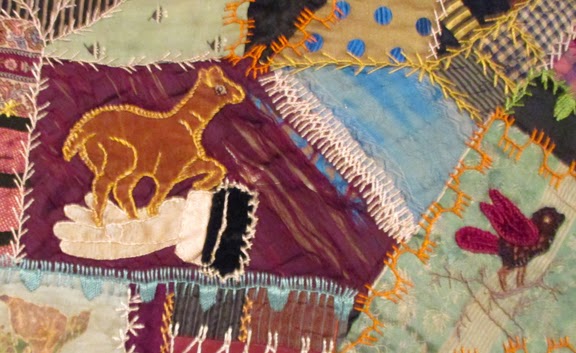 The embroidered imagery on the quilt is
also striking, 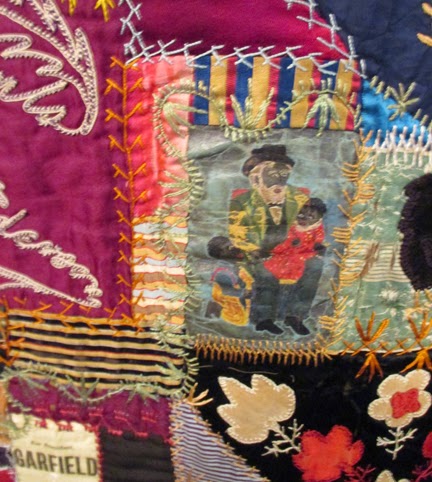 particularly this painted portrait of an
older black man with two children.

The Merchant's Mall at AQSG meetings is always
outstanding. 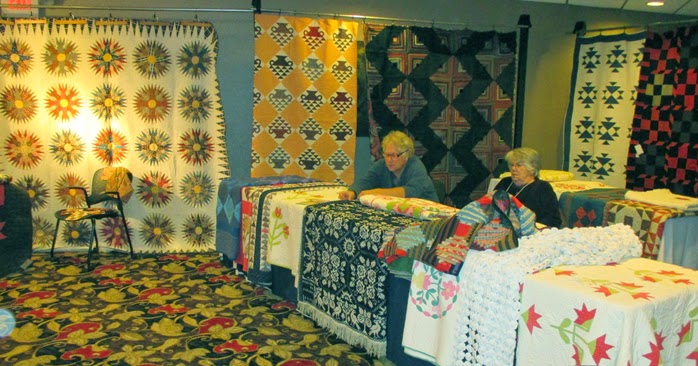 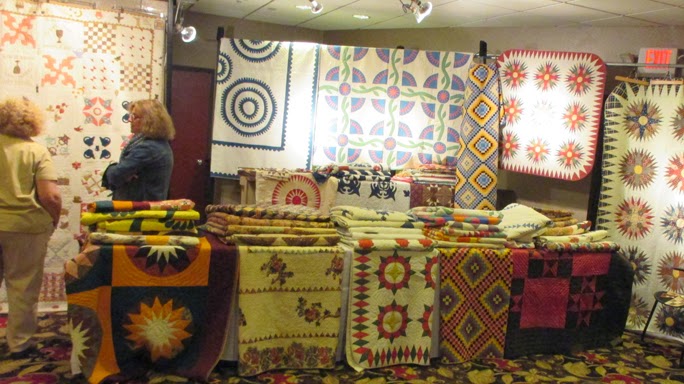 That's a temperance sampler on the left.

Next September in Indianapolis.
'

What a fantastic quilt! So full of original historic memorabilia! Would love to see it in real.

Wow! It was fun discovering this quilt with you. Love all the stitches too. Thanks.

I would love to go to that show, so many beautiful quilts on display.

I remember Laurene Sinema talking about this group. Thanks for posting the pictures of the crazy quilt. It's wonderful to see the history, and the stitching that was used.

I like how they used different stitches between pieces on the front. I wonder if they stitched them right sides together with a running stitch first? It's also fun tho wonder about the worn out clothiers they must have used. Thank you for sharing.

Penny
Those silks were probably new scraps from sewing clothing. They are worn now because they are so unstable over 130 years. The silk yarn is organic (it's going to break down) and the dyes were corrosive.

What an amazing quilt...it is wonderful to imagine the person who stitched this beauty.