Threads of Memory 7: Oberlin Star for the Oberlin Rescuers 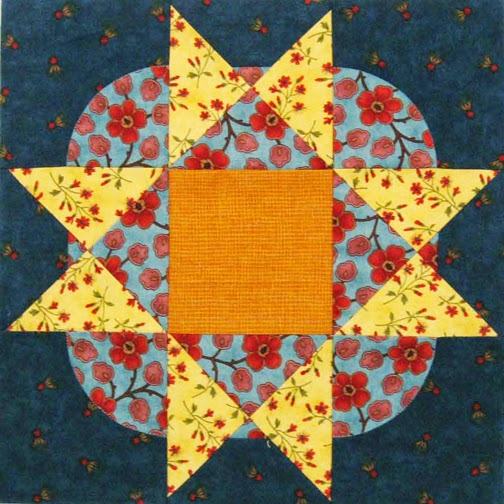 Block # 7: Oberlin Star for the Oberlin Rescuers by Jean Stanclift


The patterns were free online for two years but now I am offering them for sale in two formats
at my Etsy shop. Buy a PDF or a Paper Pattern through the mail here: 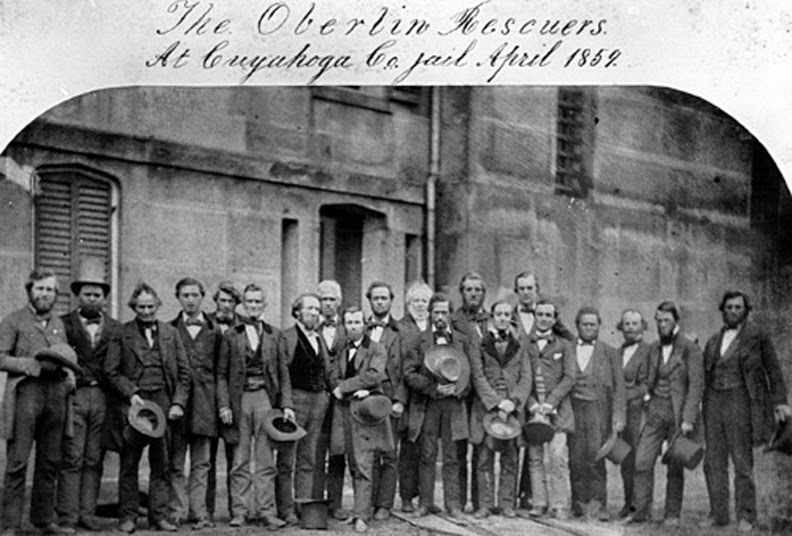 Twenty of the Oberlin Rescuers (also called the Oberlin/Wellington Rescuers.)
Oberlin College has extensive information about the topic at their website. See below.

The tale of the Oberlin, Ohio "Rescuers" was told in the newspapers of the day. It began near Oberlin:

"On Monday, Sept. 13, a young man residing two or three miles from town was hired to decoy a colored man from the village, upon the pretence of employing him in labor. As they were riding on the way to the work, as the colored man supposed, about two miles from the village he was seized by three men – one an official from Columbus, the others Kentuckians – and hustled into a carriage. They drove at once to Wadsworth’s Hotel in Wellington.

From the American Antislavery Almanac, 1839

"A resident of Oberlin met them on the way and reported in town his suspicions that an arrest had been made. Companies of men, students and citizens, armed and unarmed, at once followed in pursuit and were joined on the way by others. 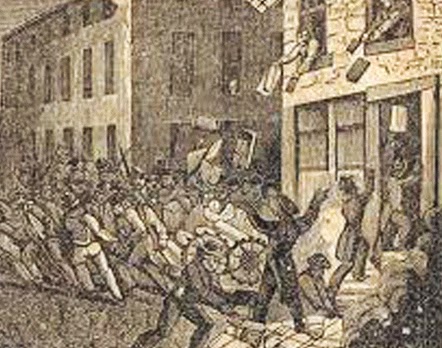 "A Mob" from the children's periodical The Slave's Friend

At Wellington they found the hotel already surrounded by crowds of people, while the man-hunters with their victim had taken refuge in the garret and had barricaded the passages. The gathering increased hourly and the excitement grew more intense, until at last the doors themselves gave way before the moral force that was brought to bear upon them, and the poor fugitive walked forth to the crowd who bore him off in triumph. Not a shot was fired, nor a blow struck, nor a bolt broken. It was not possible to resist the demand for the release in the name of the Higher Fugitive Law, backed by such an executive force.---The Oberlin Evangelist, September 29, 1858


The "Higher Fugitive Law" was the principle that the nation's Fugitive Slave Law was trumped by antislavery's moral law. 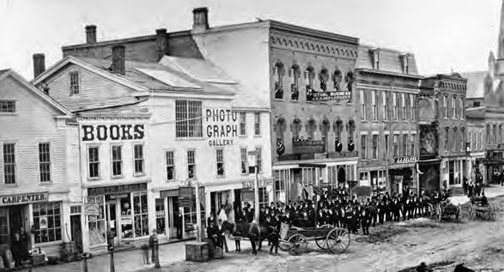 Oberlin was such a hotbed of antislavery that the Kentuckians hoping to retrieve 17-year-old runaway John Price realized they had to trick him out of town before they could kidnap him. They took Price to nearby Wellington, but soon over a hundred protesters from Oberlin and Wellington demanded his release. 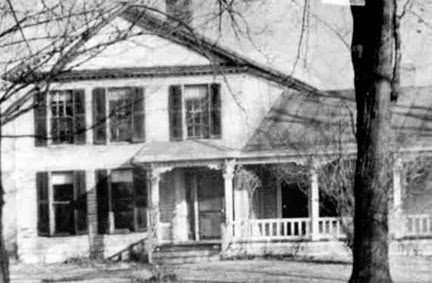 The Rescuers managed to free Price without bloodshed, return him to Oberlin and send him on to freedom in Canada. Thirty-seven of the lawbreakers who rescued him were indicted and jailed. Only two went to trial. 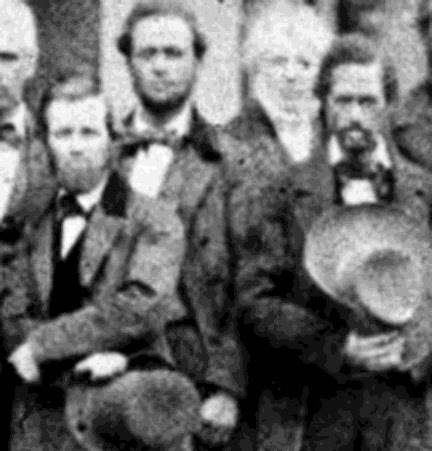 The two rescuers in front holding their hats are
Simeon Bushnell and Charles Langston, who served short sentences. 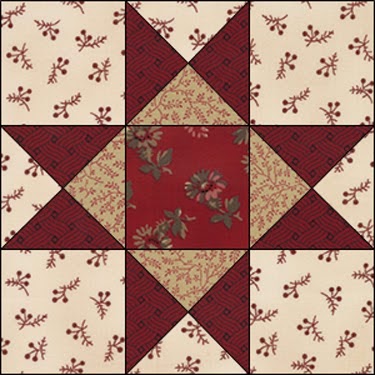 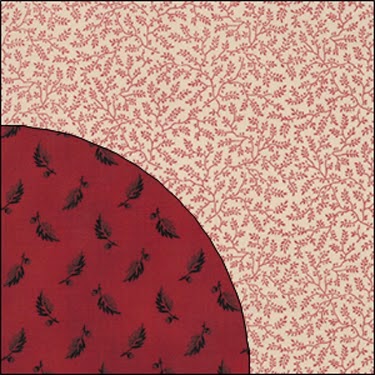 Oberlin Star is a new block combining an old-fashioned Ohio Star with the easy-to-piece curve popular in end-of-the-nineteenth-century designs called Drunkard's Path or Wanderer's Path in the Wilderness. The block honors the town and the college that offered education and hope to African-Americans. 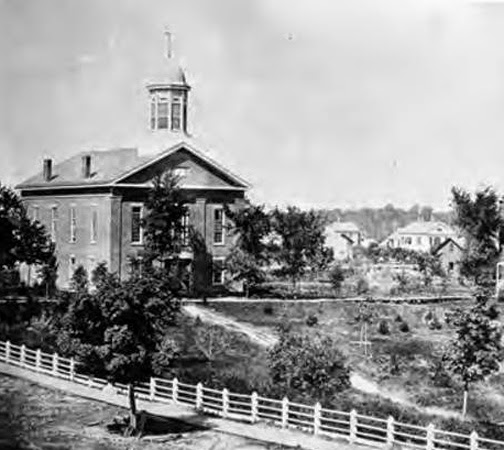 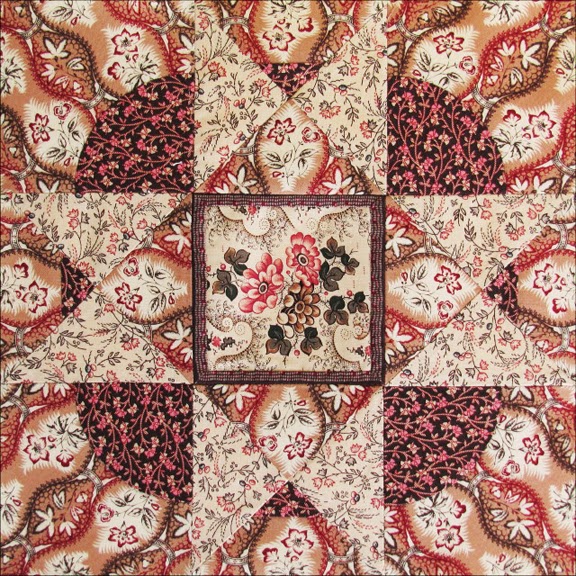 Oberlin Star for the Oberlin Rescuers by Becky Brown 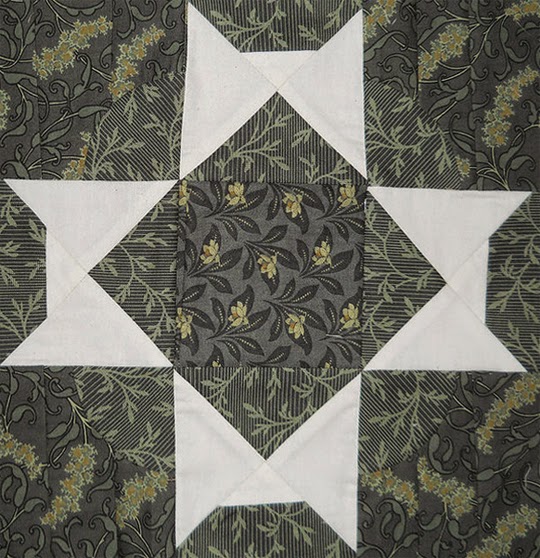 What We Can Learn About the Underground Railroad from the Langston's Story
When the stories of the Underground Railroad were recalled at the end of the nineteenth century, American memory tended to view the heroes primarily as white. Charles and Mary Langston's story emphasizes the free-black community's commitment to freedom, how they both broke the law and used the law to assist slaves. A dozen of the indicted Rescuers were free blacks. 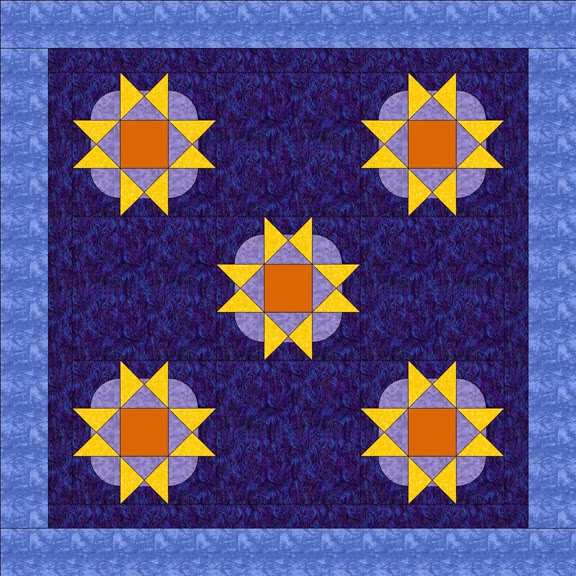 
Make a Quilt a Month
The Oberlin Star block could represent the North Star on a cloudy night. To emphasize that look create a small quilt with a starry sky by alternating 5 Oberlin Star blocks with 4 plain dark blue squares cut to 12 1/2" x 12 1/2". Border with a 2" finished inner border of dark blue to highlight the blocks and then a 4" finished outer border of medium blue to create a square quilt finishing to 48" x 48".

Read a history of the town and its role in the Underground Railroad movement.
Nat Brandt, The Town That Started the Civil War. Syracuse, NY: Syracuse University Press, 1990. 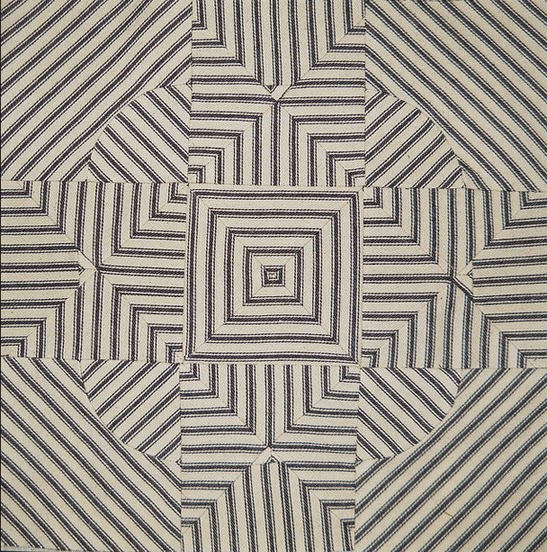 Dustin's ticking version, curves and all.

The template for Oberlien star is not visible

i cannot get the template the right size for the life of me. very frustrated. any one else have a hint as to how to print this. I copied into word and adjusted the margins to none and printed at 100% to no avail. my templates are too large by 1/8 inch

Becky Brown has outdone herself, such a different looking & fascinating block!

This block is outstanding.
As a French I did not know much about slave fugitives until the story about the quilts supposed to help them on the Underground Railway.
I also enjoyed to read "The last Runaway" from Tracy Chevalier : it takes place in Oberlin and it is also about quilting!

Every month I look forward to a new block what a brilliant block this month.
My blocks I make of scraps are not bigger dan 6 inch of each block I make there one so that it becomes a sampler.

I copied and pasted the image into a blank document, then increased the size of the image until the width was 8.5 (height is 10.97) and the pattern printed out correctly.

I am not a computer literate, so I have trouble with the directions. My I.T. husband read the directions, and said that the term used were not correct.The use of the term " file" is wrong, and the direction of "open a word or JPEG file" is not the preferred language. It was Greek to me! Step by step directions on using the correct computer keystrokes would be helpful.