On August 23rd, 1861 Union troops arrested 48-year-old Rose O'Neal Greenhow, Washington hostess, socialite and widow of a State Department employee. Born in Maryland, she was daughter of a planter murdered by one of his slaves when Rose was three. As young women she and sister Ellen went to live with Aunt Maria Hill who ran a polite boarding house known as the Old Brick Capitol.

Rose
The girls made good marriages. Ellen wed James Madison Cutts, nephew of Dolley Madison. Their daughter Adele grew up to marry Senator Stephen A. Douglas. Rose's husband Robert Greenhow introduced her to Washington society and taught her the value of diplomacy, observation and conversation. Well-connected and passionate about the Confederate cause, she charmed many Union politicians.

In her autobiography Rose described her July activities in Union Washington.


... the 'grand army' was in motion, and I learned from a reliable source (having received a copy of the order to M'Dowell) that the order for a forward movement had gone forth. .... Officers and orderlies on horse were seen flying from place to place; the tramp of armed men was heard on every side - martial music filled the air; in short, a mighty host was marshalling, with all the 'pomp and circumstance of glorious war.' 'On to Richmond!' was the war-cry. The heroes girded on their armour with the enthusiasm of the Crusaders of old, and vowed to flesh their maiden swords in the blood of Beauregard or Lee. And many a knight, inspired by beauty's smiles, swore to lay at the feet of her he loved best the head of Jeff Davis at least."

At midnight Rose sent a woman messenger to General Beauregard at Manassas with a note about Union plans twined into her hair. Confederate commanders were grateful for the intelligence, replying:

"Let them come: we are ready for them. We rely upon you for precise information. Be particular as to description and destination of forces, quantity of artillery, &c."

A reconstructed letter from Rose,
written on mourning stationery, using a code.
After her arrest it was assembled from bits of paper
in her grate. National Archives. 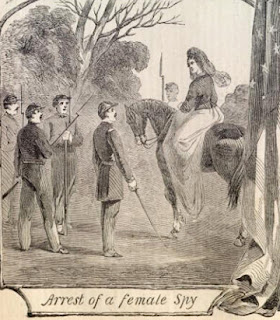 The Confederacy won the first battle of Manassas and many credit (or blame) Rose Greenhow. Never one to hide her Confederate loyalties, Rose was soon placed under house arrest. Although forbidden to leave her home she continued to pass information.

She was then imprisoned with her youngest daughter Rose in the same building she'd spent her adolescence. The Old Capitol Boarding House was now the Old Capitol Prison. (Today the site is the Supreme Court building in Washington.)

Rose and daughter in prison by Matthew Brady

Held for almost two years without being charged or tried, she managed to spy from prison. In May, 1863 she was exiled to Richmond, where she was welcomed as a hero.

President Jefferson Davis appointed her an unofficial ambassador to Europe a few months later. There she met with England's Prime Minister and France's Emperor, hoping in vain to persuade them to recognize the Confederate States of America.  She published her autobiography in London.
Portrait from her autobiography

In 1864 Rose returned to America with her publishing profits in gold coins tied around her neck. The blockade running ship carrying her into Wilmington, North Carolina ran aground in the Cape Fear River. Rose was launched in a lifeboat that capsized. Weighted down by dispatches for Jefferson Davis and her fortune, she drowned on October 1, 1864.

Cutting an 8" Finished Block
A Cut 4 dark squares and 6 light squares 2-1/8". Cut each in half diagonally.

Read Rose Greenhow's memoir My Imprisonment and the First Year of Abolitionist Rule at Washington by clicking here and downloading a copy from the University of North Carolina's Documents of the American South.

See the National Archives records where the items confiscated at her arrest have been stored.
http://www.archives.gov/research/arc/topics/civil-war/greenhow.html
Read more about her fascinating life story here
http://www.lib.unc.edu/ncc//ref/nchistory/oct2005/index.html

Love the block. I knew about Rose Greenhow and her spying but never knew the rest. Fascinating. Thanks as always for the history and block.

a nice block, but a little tricky to figure it out in 4"

What an intriguing story. I do hope you publish this project: fascinating stories, lovely blocks and truly wonderful photos and illustrations. Thanks so much.

I love reading about the women in the Civil War. In school, they just skipped over the women who were interesting and did important jobs. Keep up the good work. I too hope you make this into a book.

I have searched Moda Fabric for the Civil War Reunion fat quarter bundle that is mention here. SKUS:8108AB. It is the 37 fat quarters for the Civil War block of the year. I can not find it and would like to make a purchase. Please tell me where I can buy this bundle pack. than you

Very interesting story. I have completed the block and have posted it on my blog along with a how-to.

I like your block and i think is very interesting. I'm from Catalunya Spain and I have a little block in catalan of patchwork very simple but for me is a good therapy to live good and lovely moments!
My block: http://lacistelladelstresors.blogspot.com/
Congratulations for yogur block!

The article was very interesting and informative for me. weight loss Read a useful article about tramadol tramadol